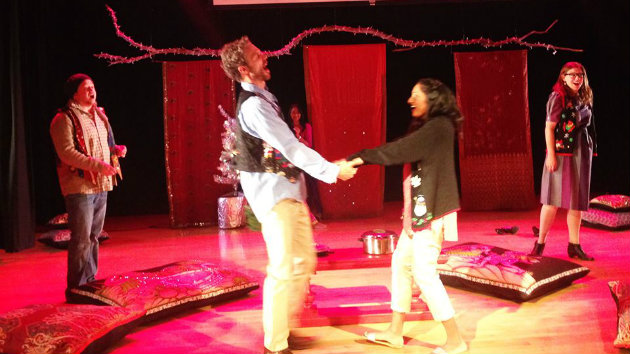 Holst’s Savitri (1909) adapts an episode from the Mahabharata, the world’s longest-known epic poem. After Death claims Savitri’s husband (the woodman Satyavan), Savitri asks in return to receive life in all its fullness. Moved, Death grants her wish, but Savitri then informs him that she cannot truly live without her husband. Death has no choice but to revive him, and the opera ends with the couple reunited.

Holst isn’t known for his operas (before Savitri, he made at least six attempts at the medium) and his mixing of Wagnerian harmonies with modality is often jarring. Such a piece necessitates a good cast, and after a somewhat rocky opening, Saturday night’s performance was largely enjoyable. 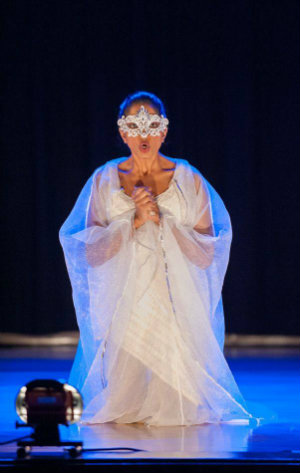 Singing the role of Savitri, soprano Maya Kherani was initially shaky — surprising, given the high caliber of her past Bay Area performances. But she has a very pretty voice, and she improved as the evening went on. Her aria, in which she asks Death to grant her life, was a highlight.

Mexican tenor Jorge Garza was a sincere and warm Satyavan, and only bass-baritone Philip Skinner (Death) could maintain such a grave demeanor in a costume that, comically, looked like Batman’s. The chamber orchestra was consistently strong, with brief but lovely solos by concertmaster Brian Lee and violist Emily Onderdonk.

Festival Opera is a small company with a small budget, and director Tanya Kane-Parry’s staging was powerfully minimalistic. She manipulated levels to suspenseful effect: As Satyavan sings, Death looms behind him, perched on a tree stump. But the lack of scenery and amateurish props made the production seem more like a school play than a professional opera. Holst envisioned an intimate setting for Savitri, but this is a story of literally epic proportions, and Festival Opera’s production needed more pomp.

In contrast, Jack Perla’s River of Light made the space come alive. Perla, a San Francisco-based composer and pianist, wrote the work in 2013 for the Houston Grand Opera’s community initiative HGOco. Kherani debuted the role of Meera, a successful businesswoman and newlywed who has little time or energy to reconnect with her Indian roots. But after the birth of her daughter, Meera longs to recreate the traditions of Diwali, the Hindu festival of lights. Houston-based author Chitra Banerjee Divakaruni wrote the libretto, whose references (Children’s Fairyland, The Chapel of the Chimes) were tailored to Oakland for this performance.

The opera is dynamic from its opening Kathak dance (an expressive, classical style from northern India), which was choreographed by Antonia Minnecola and performed by Richa Shukla and Gopi. Kherani was vibrant as Meera, and baritone Daniel Cilli brought his usual charisma to the role of Meera’s husband, Burton. His voice sounded much stronger on Saturday than it did in Festival Opera’s production of Ariadne auf Naxos last summer. Tenor Michael Boley and mezzo-soprano Molly Mahoney, playing the neighbors, rounded out the ensemble.

Perla, who has written operas for the Los Angeles Opera, Opera Theater of Saint Louis, and Seattle Opera, is also active in jazz and world music. His versatility as a composer shines in River of Light, which seamlessly integrates jazzy chords in the keyboard (Ben Malkevitch) with tabla (Nilan Chaudhuri) and sitar (Arjun Verma), violin (Lee), and cello (Amy Brodo). Particularly rewarding is Perla’s use of tabla; rarely is rhythm so present in opera.

In an opera with minimal conflict the final resolution scene reads too long, even with the welcome addition of the dancers, and Divakaruni’s libretto is too heavy-handed here for the message of love to be sincerely felt. But humor is Perla’s saving grace. After a spat in which Meera accuses her husband of not caring about her heritage, Burton presents her with a candle he’s bought specifically for Diwali. An expectant dominant seventh chord plays: Will she like it? She does.