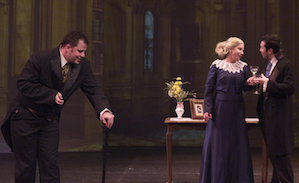 After a summer season hiatus in which it ostensibly regrouped, Festival Opera resurfaced this week with an interesting experiment. Rather than waiting until summer 2013 to present its customary two productions, it mounted the first of a very different season in December. Titled About Face, the “two-act” evening prefaced an established one-act opera, Henry Mollicone’s The Face on the Barroom Floor, with a work-in-progress, composer Kurt Erickson and librettist Keith Nealy’s Faces of Affliction. Central to both works was the presence of soprano Heidi Moss, and her desire to raise awareness about her personal affliction, facial paralysis.

Reaching out to a new constituency, the company staged weekday afternoon and evening weekday performances at it usual home, Walnut Creek’s Dean Lesher Center for the Arts, and a third in a novel location, the dry acoustic of Oakland Technical High School’s auditorium. It was that performance, at which a small audience arrived at the unusually early hour of 7 p.m. to brave the cold of an unheated auditorium, that I attended. (Best line of the evening, from Festival Opera Executive Director Sara Nealy: “When I rented the auditorium, they didn’t tell me that I had to pay extra for heat.”) 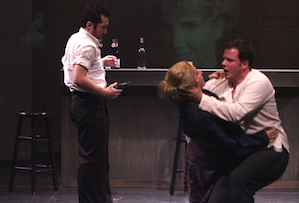 Both operas shared a cast of three principals: Moss, baritone Eugene Brancoveanu, and tenor Jorge Garza. They also replaced costly, static backdrops with a total of 31 frequently changing tripartite projections designed by Keith Nealy and engineered by Director of Production Fréderic O. Boulay. As definitive as it gets piano accompaniment was provided by, in Faces of Affliction, composer Erickson on an exceedingly tinkly grand, and in The Face on the Barroom Floor, composer/librettist Mollicone on a bar-appropriate upright, with support of cellist Michelle Kwon and flutist Amy Pikar.

Keith Nealy, Sara’s husband, began writing the libretto to Faces of Affliction a year ago, after he met Moss and learned of her desire to turn her challenge into an opportunity. As he explains in his Stage Director program notes, he recalled his own bouts of Bell’s Palsy and childhood stuttering, and became “intrigued by the psychological effects of affliction and the impact of intolerance and compassion.” His resultant libretto, a pastiche that brings together the music of Verdi’s Violetta (La traviata) and Rigoletto (Rigoletto), two characters suffering from affliction, with a “new work in development” that explores the fate of “Elephant Man” Joseph Merrick, has been set to music by Erickson. The pairing with Mollicone’s Face honored Moss’ wishes. 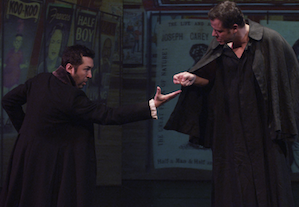 It was hard to make sense of this work-in-progress. The thematic associations were apparent, but beginning with Verdi’s “E strano” section of Violetta’s “Sempre libera,” switching to Rigoletto’s “Pari siamo” duet with Gilda, and then presenting Erickson’s very different, and hardly as catchy music did not for coherence make. Nor, for those unfamiliar with Merrick’s story, I being one, did the switch from freak show to high society parlor hold together.

As each afflicted character appeared, company co-founder Ted Weis, a doctor in “real life,” appeared in a white coat to recite the medical definition of their conditon in a deadpan manner. The definition was also projected behind him. Don’t ask what this did to whatever semblance of musical flow had been established.

Nealy proclaims that the opera’s final trio is a “powerful statement” in which Merrick “rises above his affliction in triumph.” This was followed by the return of Violetta, who proclaims that she will live her life with joy. Not only was Merrick’s “triumph” treated perfunctorily and weakly expressed musically, but the return of Violetta also made little sense. Associating her proclamation with Merrick’s triumph is a rather specious concept that ignores the fact that Violetta’s short-lived joy is followed by shame, destitution, and death from tuberculosis.

Moss was not entirely in her comfort zone as Violetta. Shortchanging some high notes, and rushing phrases that longed for lingering, she first hit her stride in Erickson’s music. Brancoveanu, in an act of internalizing the opera’s themes far beyond the call of duty, was singing through the tail end of a bout with pneumonia that left him rehearsing through coughs and fever. His handsome instrument was a strong as ever — one size larger than those of Moss and Garza — but there was an edginess to his vocal production no doubt caused by his affliction. Garza, who is slated to appear in Avery Fisher Hall and Carnegie Hall, sang with much beauty of tone, but strained in two high passages. 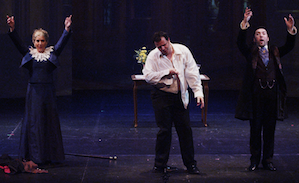 What, I wonder, would Joseph Kerman, who called Puccini’s Tosca a “shabby little shocker,” have to say about Mollicone’s double barrel melodrama? Certainly there is no question that an opera with two shootings in less than 10 minutes is right at home in Oakland, where two homicides occurred the same night as the performance, the first during Act 1. (Please don’t consider me callous. I live in the Oakland’s Fruitvale district, and just finished repairing the bullet hole in my car window.)

There is no question that Mollicone’s music has its beauties. The big soprano aria, wonderfully performed by Moss with absolute surety, is both lovely and touching, and the final trio is quite moving. All three principals were at their best in this opera, and sang with admirable beauty. Special commendation goes to Brancoveanu, who not only managed to pull himself upright after inttentionally twisting himself severely as Merrick, but also summoned forth his usual boundless reserves of energy and conviction.