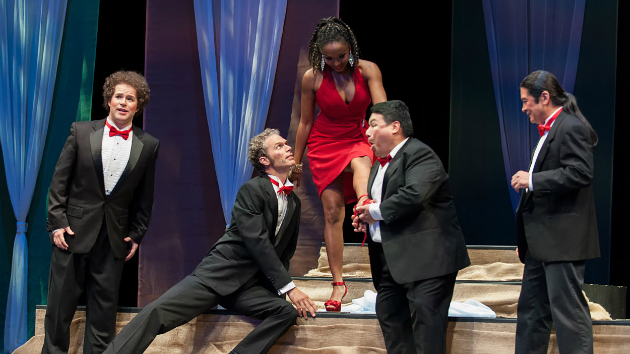 Conductor Michael Morgan has been the artistic ace-in-the-hole of Festival Opera almost from the beginning. And so it was again on Friday, when he led the struggling but scrappy company in a feisty production of Strauss’ Ariadne auf Naxos at the Lesher Center for the Arts in Walnut Creek. That was a triumph in itself, as the company had not performed there since 2013.

Both conducted and directed by Morgan, the focus of the elegant production was clearly on the music, which was played and sung with enthusiasm. Maestro Morgan led an animated orchestra that only rarely overwhelmed the singers. There were moments of chaos but also ones of great loveliness. The harpist, Sarah Voynow, played particularly well.

Morgan's direction was straightforward, and his dedication to presenting the music without distractions was commendable.

The simple set featured a three-tiered platform in the center of the stage. There were a few pieces of furniture used for the Prologue and five long vertical banners hanging from the ceiling for the Opera.

In this production, the action was set in the present, with contemporary costumes. The outfits in the Prologue easily could have been the actual street clothes of the performers. For the second half of the piece, the women were in gowns and the men in suits, almost as if they were performing a concert version of the opera. In fitting with the contemporary setting, the Composer was simply a woman rather than a woman pretending to be a young man, and the Major-domo was armed with an iPad.

The Prologue was performed in English, while the opera was performed in German. This solution, however imperfect, was not disagreeable. The audience was given the opportunity to truly enjoy the humor of the work in English. It is odd, though, that Zerbinetta and her crew can sing such nice German for the opera portion. Othalie Graham has a well-supported voice with pleasantly metallic qualities at the top of her tessitura. She made for a powerful and impressive Ariadne.

Many of the principal singers engaged by Festival Opera are accomplished and this performance was no exception. Othalie Graham has a well-supported voice with pleasantly metallic qualities at the top of her tessitura. She made for a powerful and impressive Ariadne. Her Prima Donna was also imposing. Shawnette Sulker was a chirpy Zerbinetta, with a wonderful mixture of brazenness and allure for the role. Robert Breault was a mincing and pretentious Tenor. He sang Bacchus with some sweetness and much volume.

The rest of the cast was less consistent, but certainly there were standouts. Catherine Martin made a fine Festival Opera debut as the Composer. Her voice was bright, and she was able to convey the character's extravagant ideals with the right amount of hysteria. Kirk Eichelberger sang the Music Master with warmth, and his interactions with Martin were convincing.

The trio of Sara Duchovnay (Naiad), Betany Coffland (Dryad), and Molly Wilson (Echo) was delightful. They blended their voices beautifully and moved gracefully.

Zerbinetta's troupe was suitably sprightly and amusing. While Daniel Cilli (Harlequin), Michael Desnoyers (Brighella), José Hernandez (Scaramuccio), and Roberto Perlas Gomez (Truffaldino) did not shine vocally, they managed to be light and funny.

A sunniness and charm suffused the whole performance, a hopeful sign that Festival Opera is recovering ahead of its highly intriguing November double bill of Gustav Holst's Savitri and Jack Perla's River of Light.

Correction: The review originally stated Festival Opera had not performed at the Lesher Center since 2011. Festival Opera presented Otello there in 2013.