On Sunday, at Alek Shrader's Schwabacher Debut Recital in Temple Emanu-El, presented by the San Francisco Opera, I was wondering about the tenor's response if Barbara Walters should ask him what kind of tree he would be. Not knowing the answer, I came up with a question to which the answer is obvious. What kind of drinking glass would Shrader be? Tall, clear, gracefully simple, and full. This is a transparent tenor, an extraordinarily ordinary singer — "ordinary" in the sense of plain, simple, unadorned, straightforward. Would that there were more like him!

There is something highly unusual about Shrader's singing: He opens his mouth, glorious music comes through it, and that's about the size of it. In his voice production, his making music, his projection, diction, and legato (oh my — the legato!) — everything about this artist is natural and effortless, so different from just about everybody else. Add more volume, slip in some powerful high notes, acquire a more recognizable timbre, and you've got a truly great tenor. Oh, and he is still on the better side of 30. 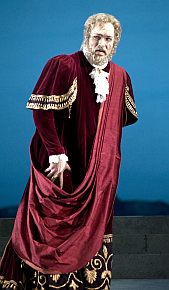 The young singer has been making a name for himself during his current Adler year with the San Francisco Opera, in which he played a riotously good and funny Nemorino in family matinees of The Elixir of Love and twice stepped in for Ramon Vargas in subscription performances. Sunday's recital had a rich, entertaining, substantial program.

It opened with three charming Benjamin Britten songs. Ca' the Yowes (without subtitles, alas) was a good opener, but immediately, Shrader hit it out of the ballpark with The Foggy, Foggy Dew. The utterly simple story of a bachelor who rescues a fair maid from the foggy, foggy dew ("She sighed, she cried, she damn' near died, she said, 'What shall I do?!'") only to end up with a son whose eyes remind him of the fair young maid, was so charmingly — apologies for the overuse of the word — simple that the entire auditorium beamed with pleasure.

Shrader's performance of the final Britten song, The Last Rose of Summer, brought to mind a popular description of our new president: Shrader is the no-drama guy. Instead of squeezing tears and blood from the Thomas Moore text ("When true hearts lie wither'd, and fond ones are flown,/Oh! who would inhabit this bleak world alone?"), Shrader sang it clearly and beautifully, allowing the audience to make its own emotional connections.

DichterliebeThen came the daring centerpiece of the evening, Schumann's Dichterliebe (The poet's love) — a cycle for mature singers about young passion. Shrader didn't sing it maturely or youthfully; he sang it straight and simple, and just right.

Supported by John Parr's exceptional and supportive accompaniment, the tenor opened with "Im wunderschönen Monat Mai" (The wonderful month of May), neither tearing into it nor using the song as a warm-up; he sang it right, with projection, diction, pauses, and everything else in place. There was a bit of a dip in "Aus meinen Tränen" (From my tears), when monotony sneaked in for a minute, but the devilishly difficult "Die Rose, die Lilie ..." couldn't have been better.

The high point of the cycle was "Ich grolle nicht" (No grudge), in which Shrader brought great intensity to the music, while not giving in to theatrical pathos. The last word of "Allnächtlich" (Every night) — the "forget" of forgetting a secret word — disappeared in a way that I don't recall having heard even from the greatest of Schumann interpreters.

The cycle ended with Shrader closing the large, heavy coffin of love and hope, "sank with it my love/And my pain, deep within," with a balance of depth of feeling and restraint that was thrilling.

Voyage Through Ecstasy and Sadness 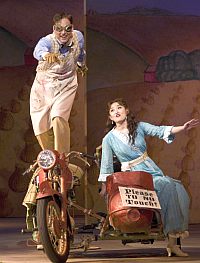 Duparc's L'Invitation au voyage (Invitation to the voyage), Extase (with as quiet an "ecstasy" as you can imagine), and Chanson triste (its sadness bearable) were followed by three Liszt songs, with Shrader airing out his "big voice" for Der Fischerknabe (The young fisherman) in particular. Then came Donizetti's Occhio nero incendiator (Incendiary black eyes) and Rossini's La danza (The dance), whose final "Mamma mia!" was attenuated too much. Responding to a heartfelt ovation, Shrader appeared with a guitar and accompanied himself in Almaviva's serenade from The Barber of Seville, during which he hit a couple of bad notes during the transition and quickly scolded "Figaro!" who, presumably, was responsible for the mishap. All these virtues, plus quick wit, too. Let tenor jokes cease for a while in honor of Alek Shrader.

Incidentally, Shrader is one of the singers featured in the Metropolitan Opera's documentary film The Audition, which will be shown as a part of the Met's series of high-definition presentations in theaters nationwide on April 19. And, though this has nothing to do with Shrader, don't miss Every Little Step (also about auditions, this time for A Chorus Line), also coming in April.