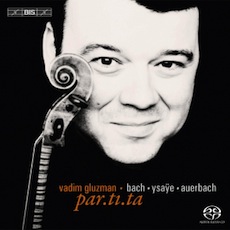 The Bay Area has heard rather a lot of Vadim Gluzman over the last several years, and gotten used to (to the extent anyone can get used to such things) his uncanny clarity and bright sound. His most recent recording, though, is of music he hasn’t programmed in the Bay Area — two Bach partitas, and two later works (also for solo violin) that draw on them.

There is so much technically impeccable solo Bach around these days (reissued and new, period-instrument and modern-instrument) that it’s getting ever harder to describe particular performances. Gluzman’s Bach is, of course, modern-instrument, but with a more-than-cursory nod to the historical-performance lot. By that I don’t mean that he puts in the odd twiddle of an ornament now and again (though he does). The main things are that he doesn’t go out of low positions any more than he needs to; that he uses open strings frequently; and that his primary expressive device is the bow and not the left hand.

Ysaÿe Sonata in A minor, I. Obsession. Prélude

It’s that last that strikes you first. So very much in this recording is about the meter, and so much of the meter is conveyed by the attack on each note. It’s crisp even where you might not expect it (as in the D-minor Partita’s Sarabande), and sometimes even crisper than you might like. Wherever you are, there is a tactus (or pulse), and an actual violin line inflected off it. It’s something rare enough in modern-instrument solo Bach.

The E-major Partita’s Loure (a French dance form) is a perennial problem for violinists. I think that that and the Siciliano of the First Sonata are really the tell-alls in the Sonatas and Partitas (relatively easy in the note-wise sense as they are), because they are the two movements among the lot that stand or fall on whether you can make the meter seem natural, and very few people know how. Gluzman gets around the Loure via a somewhat artificial-sounding separation of every note from every other one. It’s beautifully played — there is nothing here that isn’t — but it misses the point.

Very little else here does. The rest of the E-major Partita is brilliant; the D-minor Partita likewise — including a Ciaccona whose trajectory is as finely handled as any I’ve heard in a long time. I don’t mean that there are poignant stops at important junctures; quite the contrary. Gluzman moves on, and the emotional current of the music moves with him.

Gluzman is better than any violinist I know of at sustaining the illusion that he’s two players, rather than one violinist double-stopping.

It was brilliant, though honestly inevitable, to put Eugéne Ysaÿe’s second Solo Sonata right after the E-major Partita. Ysaÿe dedicated each of the six sonatas (his Op. 27) to other violinists, and No. 2 was for Jacques Thibaud, who liked to warm up with the “Preludio” to the E-major Partita. He also was obsessed — the Ysaÿe is subtitled “Obsession” — with the “Dies irae,” the chant from the Requiem Mass that turns up in other composers’ dreams, from Berlioz to Rachmaninov and beyond.

So Ysaÿe’s sonata for Thibaud begins with bits of Bach, snippets of the “Dies irae,” and material in between so convincingly improvisatory that even seasoned music critics have mistaken that first movement for something made up on the spot, when Gluzman has played it as an encore. But there’s more. The muted second-movement Malinconia is quite beautifully played, the illusion of a violin duet perfect. And the third-movement “Danse des ombres” (Dance of the shades) is lovely in the same way. Gluzman is better than any violinist I know of at sustaining the illusion that he’s two players, rather than one violinist double-stopping.

Lera Auerbach’s par.ti.ta gave the disc its title, and really deserves pride of place here, except that it’s so much the successor of everything else on the disc that it ought to be heard last. Written for Gluzman in 2007, it’s a sequence of 10 short movements for solo violin, averaging about 2 minutes apiece. The Bach in them is evident, but so is the Ysaÿe. It’s more Bach in some (the source of the third-movement Andantino scherzando will be recognizable to any violinist in an instant), more Ysaÿe in others (the sixth-movement Vivo scuro), but — all in all — it’s a fine tribute to those two very different predecessors. That it was designed for Gluzman is evident, but it won’t be long before other violinists sense the possibilities.

Gluzman is magnificent throughout, from the high harmonics at the beginning to the ultralow harmonics (“fifth” harmonics, as in you can make them sound only by stretching your hand very far) near the end.