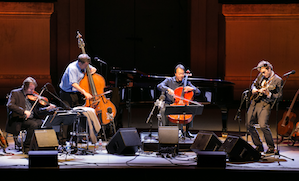 More than 5,000 music lovers arrived at UC Berkeley’s open-air Greek Theatre on Saturday night to enjoy the belated first tour of The Goat Rodeo Sessions. Some in the age diverse, overwhelmingly white and Asian crowd were drawn by the presence of cellist Yo-Yo Ma, whose work with classical, world, and other musical forms has done almost as much to break down musical boundaries as has the “shuffle” function on portable devices. Others came for mandolin virtuoso, vocalist, and progressive bluegrass whiz Chris Thile (pronounced Tee-lee); bassist Edgar Meyer, who was part of the trio with Ma on the best-selling albums Appalachian Waltz and Appalachian Journey; superb Nashville violinist and session legend Stuart Duncan; and/or guest vocalist Aoife O’Donovan (first name pronounced EEE-fah) of Crooked Still fame.

Certainly many arrived for their first chance to hear The Goat Road Sessions since the release of their eponymous, Grammy Award-winning 2011 CD for Sony Masterworks. Prepared to hear what has been variously dubbed “salongrass” (by Jeff Kaliss in SFCV) and “chambergrass” (by Andrew Gilbert for the Bay Area News Group), they discovered that those terms only hint at the musical richness of The Goat Rodeo Sessions.

We listened over a fine sound system that put the amplification in San Francisco’s Stern Grove to shame — only the piano, played by Meyer in one number, sounded tinkly, while the mandolin suffered a bit from some high frequency roll-off. With enjoyment abetted by projected video close ups from different camera angles, we discovered a surprising unanimity of intent from four extremely different musicians. Evident from the get-go, when the ensemble began playing at a heartening, toe-tapping pace, then transitioned into a heartfelt cello adagio from Ma, and next moved on to more plucking, swinging, and upbeat solos from other “goats,” the music was both viscerally engaging and exquisitely refined. “Exquisitely refined?” Though the term is most commonly employed, in classical circles, to refer to a lieder singer’s delicacy of line and economy of expression, or instrumental musicianship so transcendent that time stands still, it’s hardly how you might expect to describe some down home fiddlin’ by a group of bluegrass buddies. 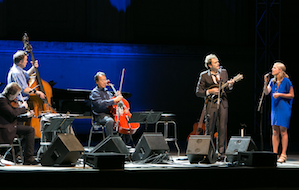 Yet the term is apt, because the brilliance with which this group of artists explored the limits of through-composed and improvisational forms evinced an enthralling fineness that transcended every ghettoized boundary that has been erected around “bluegrass,” “country,” and then some. Take, for example, the first of O’Donovan’s four appearances. Attired in a lovely blue dress — the boys might consider following her lead, and brightening up their outfits to match their vivid playing — the artist brought an exquisite, sublime melancholy to “Farewell Angelina.” Assisted by Thile, whose singing proved equally nuanced and evocative, the vocals were perfectly matched by the four men’s playing.

There was no program. Song titles were not distributed in advance. Instead, the artists announced titles either before and after they performed them on the two hour program. Their styles were also different, with Ma often contributing long, slow strokes as the others danced around him. (He did get going at one point, with Coleno tapping away at the cello’s strings with his bow, to marvelous effect.) More than once, he ended a song with a long held, beautiful note that evoked sighs as well as cheers. 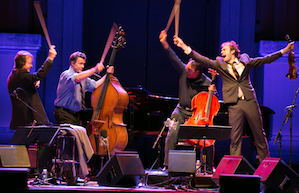 There was one specifically “classical” selection. When a member of the ensemble announced they would next perform what I believe were the 3rd and 4th movements of Bach’s Third Gamba Sonatas, the many Bach lovers in the audience, some of whom may have already heard Thile’s August 6 release, Bach: Sonatas and Partitias, Vol. 1 (on mandolin, of course), cheered. With amplification emphasizing the midrange of the mandolin’s plucked strings over their high-pitched leading edge, the first movement was slightly handicapped — Thile sounds marvelous on his new, extremely convincing Nonesuch disc — but when everyone got going in the next joy-filled movement, the suitability of mandolin for Bach was beyond question.

Between selections came somewhat self-conscious, oft halting patter. It was hard to tell if its stiffness was a result of either over-rehearsing or awkwardness, but there was enough amusing commentary, especially about the genesis of intentionally obscure composition titles, to make it endearing. And once everyone got down to playing, all else faded away.

There was one sublime encore. After prolonged whoops, hollers, and cheers, the ensemble returned with O’Donovan to perform one of the most touching and, yes, exquisite renditions of “All Through the Night” I have ever heard. Although both O’Donovan and Thile might be wise to hark back to their musical training and practice silent in-breaths, their sotto voce singing was otherwise perfection itself. (In all fairness, the noisy inhalations may have been an intentional, pop-influenced attempt to enhance the intimacy of their singing.) It was a beautiful end to an evening of musicianship at its finest.