British pianist Paul Roberts’ Friday night recital-lecture at Old First Church turned out to be a rather iffy affair. On the whole, he left the impression that he’s more scholar than polished pianist. His objective was to untangle the roots of what would evolve into French Impressionism from Liszt’s piano style. 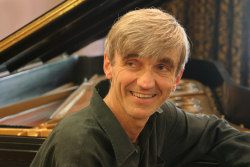 His all-Ravel second half included Jeux d’Eau (Play of the fountain), and all five movements of the composer’s suite Miroirs (Mirrors) — “Noctuelles” (Moths), “Oiseaux tristes” (Sad birds), “Une Barque sur l’océan” (A bark on the ocean), and the two most famous of the suite: “Alborado del Gracioso” (Morning song of the jester) and “Vallée des Cloches” (Valley of the bells). Roberts played no encore.

Roberts is a scholar who specializes in French music. He has published a book on Debussy’s piano music, and is about to publish a second book, on Ravel’s entire oeuvre. Meantime, he has begun recording the complete Debussy piano compositions. Indeed, his first volume of the Debussy Préludes has drawn considerable praise in the press. Listeners therefore have a right to expect a lot, but instead, in this recital Roberts served up several disappointments, along with some admirable performances.

Best of all was Jeux d’Eau with its playful cascade of genteel notes virtually trickling out of the piano. Roberts played it lovingly, with appropriately soft dynamic levels, save for the occasional mild climax. He surprised me by mentioning that the work was heavily criticized when new as being too dissonant. Too dissonant for 1901 Paris, maybe, but it goes down today like a blissful glass of bubbly.

The same was true during most of the highly impressionist Miroirs. He delivered a fine performance of “Sad Birds,” with its tolling sigh motives and sudden flashes of flight. The same came forward during the tinkling of distant bells in “Valley of the Bells,” although its softly fading final pages struck me as an odd way to end a two-hour program, considering that a quarter of the time was taken up with commentary.

Yet the opening “Moths” sounded too aggressive by half. Ravel was not, after all, trying to paint Godzilla’s moth enemy. Yet it sort of sounded that way under Roberts’ hands. By contrast, “A Bark on the Ocean” sounded a tad anemic. Admittedly, I’m more accustomed to Ravel’s 1926 orchestration of the piece, where it can thunder and splash up surfing waves like crazy.

The problem child of Miroirs is that damnable Spanish “Alborado” movement. Ravel’s demands are superhuman here, laying down very rapid repeated notes that can’t be managed with one single finger. No, the player has to flail the notes like cutting a desk of cards, using four or even all five fingers to achieve Ravel’s guitarlike effects. Many a famous virtuoso has come to grief while attempting to play or record this work (Robert Casadesus, for instance). So perhaps we should not be too hard on Roberts about his rhythmic instability while playing that. He gave it a good try, nothing more.

Both Ravel’s fountain studies and his Miroirs were played from memory, which seemed to make all the difference. Ravel’s waltzes were not, as Roberts was reading from the score. To come directly to the point, they represented the poorest playing of the recital.

Roberts was far too loud for these short, elegant pieces, as well as smothering them in percussive staccato playing of a sort more appropriate to Prokofiev or Bartók’s early piano music. Then too, there were too many mistouched notes, especially amid chords, plus an exaggerated swooning rubato that sounded way off base.

Relating those waltzes to Liszt is pretty far-fetched, to begin with. I don’t hear anything of Liszt in them. Rather, they form a kind of homage to Schubert’s soothing lyricism. One obvious fact to illustrate my point is that Ravel borrowed his title from two Schubert piano collections: the 34 little Valses sentimentales, Op. 50, and the dozen Valses nobles, Op. 91. What Roberts offered was merely a reading of Ravel’s waltzes, not a performance ready for prime time.

Liszt’s lake and fountain pieces fared much better, with more bravura thrown in than for any of the Ravel pieces — save for the “Alborado.” With Liszt, bravura is what’s called for. Here Roberts strongly underlined his point on Liszt’s influence on Ravel. Indeed, some of Liszt’s very late music, like Nuages gris (Gray clouds), can easily be mistaken for authentic Ravel, at first encounter.

But Geneva’s bells sounded rough and overly clangorous, as did the Villa d’Este fountain music. Of course, it’s often thought that Liszt should be played with a bit of keyboard roughhousing. But these essentially pastoral compositions require a bit of pastel playing to highlight their best qualities.

Hence the evening was partly good and partly mismanaged. What Roberts performed was mostly a kind of “little girl with the curl” kind of recital.