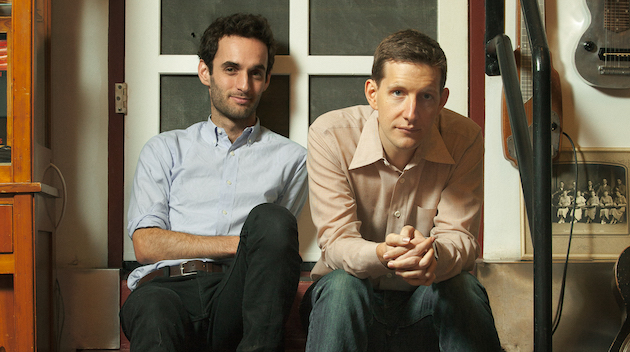 Musicians have long delighted in crossing stylistic boundaries. Bach mastered the French, Italian, and German styles of Baroque music to create his unique synthesis. The Beatles incorporated influences as varied as Chuck Berry, Carole King, Motown, the Beach Boys, and Stockhausen. On Sunday night at Herbst Theatre, San Francisco Performances and the Omni Foundation for the Performing Arts presented guitarists Julian Lage and Chris Eldridge in an eclectic boundary-crossing concert that boasted influences ranging from Andres Segovia and George Gershwin to Doc Watson and Tony Rice. The evening was a triumph.

Julian Lage, a dazzling talent still in his twenties, grew up playing blues, classical, jazz, and roots music. I should disclose that I taught him classical guitar at the San Francisco Conservatory of Music and appear giving him a lesson in the Academy Award nominated documentary Jules at Eight. I was ultimately just one of many teachers he learned from, including such influential figures as Randy Vincent, Gary Burton, Mick Goodrick, and Jim Hall. Critics who write about Julian invariably focus on his fluid melodic lines, dramatic dynamic shaping, lively articulation, varied textures, and the original individual voice heard in all his performances.

Chris Eldridge, a member of the genre-defying band Punch Brothers, spent his formative years with the seminal bluegrass band, the Seldom Scene, first as the child of their banjo player Ben Eldridge and then as a part-time member. He later studied at the Oberlin Conservatory with Bobby Ferrazza and bluegrass guitar legend Tony Rice. His main band, Punch Brothers, has created a huge impression with their albums influenced by bluegrass, pop, classical, and jazz. 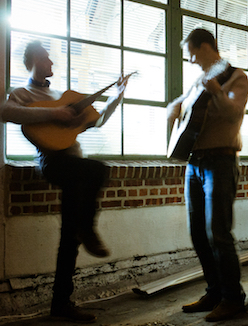 Together Lage and Eldridge explore a repertoire of jazz standards, country ballads, fiddle tunes, and what they call “esoteric acoustic guitar art songs.” It is all entertaining, but it is that last category that I find most intriguing and that they serendipitously discovered when they first improvised together backstage at a Punch Brothers concert. Sunday’s recital opened with two Lage compositions that fit that classification. Steady Proof combined a restless minimalist esthetic, impressionistic chords, and a melodic line that made me think of Pat Metheny’s eclectic approach to jazz. Stone Cross began with a traditional bluegrass solo that was quickly subverted by unusual harmonic changes while Lage and Eldridge traded melodic lines, which were infused with their own personalities but made for a perfect blend. A more introspective middle section brought in elements of the blues as well as variety and surprise. The artists alternately blend then highlight their different musical backgrounds with Eldridge more rooted in bluegrass tradition but regularly reaching out to explore other approaches while Lage is more adventurous, surprising, and delightfully interested in exploring simpler, traditional playing.

They bring a lovely variety to their presentation by incorporating vocals in about half of their numbers. Chris Eldridge takes the lead and sings with simplicity and emotional sincerity that perfectly match the setting of two acoustic guitars and Lage often adds a harmonious supporting voice. Norman Blake’s “Ginseng Sullivan” is a bluegrass song about poverty and longing for home punctuated with simple instrumental solos. “Keep Me From Blowing Away,” a song written by Paul Craft and made famous by Linda Ronstadt, is a slow sad ballad that perfectly suited Eldridge’s plaintive tenor and that brought Lage the first of several spontaneous bursts of audience applause for a surprisingly long and yearning improvisation.

Lage and Eldridge perform on vintage Martin guitars from the 1930s. In order to be heard in a context that includes fiddles and banjos, these instruments are traditionally played with great strength and drive but little subtlety. The guitar-duo format and amplification allow Lage and Eldridge to take an infinitely more subtle approach — almost classical in conception — that emphasizes shifting colors and dynamic flexibility. At times their playing brought to mind David Tanenbaum’s beautiful steel string solo in John Adam’s Naive and Sentimental Music. Nylon-string guitars are rightly celebrated for their expressive abilities, but it was delightful to spend an evening with artists who convincingly made the case for the expressivity of the steel-string guitar.

With their focus on American roots music and original compositions inspired by those traditions, Lage and Eldridge seem poised to join an elite group of guitar duos like the Assad Brothers, the Beijing Guitar Duo, and SoloDuo that have made their mark by bringing fresh repertoire as well as great beauty to the musical world.