In 1781, Joseph Haydn announced the appearance of a new set of string quartets, "composed in a new and special way, because I have written none in 10 years." The six quartets would appear as Opus 33, and would be Haydn's first authorized quartet publication in accordance with the terms of a contract he signed in 1779 with Prince Nicolaus Esterházy. With one of these works, No. 29 in G major, the New Esterházy Quartet inaugurated a series of 18 programs that over the next two seasons will include all 68 of Haydn's string quartets, in celebration of the 200th anniversary of the composer's death on May 31, 1809. 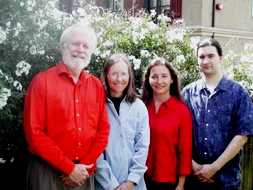 Performing in St. Mark's Lutheran Church in San Francisco on Sunday afternoon, violinists Katie Kyme and Lisa Weiss, violist Anthony Martin, and cellist William Skeen presented a program of four quartets that summarized Haydn's oeuvre, and provided a foretaste of delights to come. Beginning with No. 29 was a brilliant move. Although it is commonly known as "Opus 33, No. 5," due to publisher Ignace Pleyel's early 19-century edition, it was in fact the opening work of the original 1782 edition from the publishing house Artaria. The pianissimo misplaced cadence that introduces the work has earned it the moniker "How do you do?" From these opening strains, it was obvious that the small audience was in for a treat.

The New Esterházy Quartet negotiated the many contrasts of the large first movement with alacrity, providing a reading that was musically satisfying and thoroughly entertaining. Even more impressive was the second movement, where first violinist Kyme stepped into diva shoes for a Largo in G minor that is more operatic scena than conversational quartet. Her wailings were succinctly supported and punctuated by the lower trio, creating a moving overall effect.

All angst was dispelled with the lively performance of this quartet's silly Scherzo, followed by a crowd-pleasing variation movement to close. Haydn excelled at writing variations, and the members of this quartet excel at playing them. Especially delightful was the third variation, in which the viola and cello trade off the tune. Martin and Skeen demonstrated the true power of the lower strings.
Diverting and Dancelike
For the second work on the program, Quartet No. 8 in E Major ("Opus 2, No. 2"), Weiss and Kyme traded places, a democratic move that typifies the closeness between the members of this group, as well as their superior ensemble talents. Written before 1765, the work is typical of Haydn's early quartet style, and includes two minuets for a total of five movements. Martin informed the audience that at the time, Haydn usually called the genre "cassatio" or "divertimento," an appropriate name for a genre that seems to have had no specific purpose beyond diverting the players, and making the composer famous.

The early quartets were the first of Haydn's works to get international distribution, albeit without the composer's approval (or knowledge, in many cases). The hallmarks of Haydn's quartet style are immediately apparent in this work in E major. A soaring first violin melody, which Weiss played beautifully, is thwarted by the rest of the ensemble, who finally come together in happy agreement. The spirited first movement is followed by the first minuet and trio. Like many of Haydn's minuets, this one is full of parallel octaves, a sin of voice-leading that greatly irritated many of Haydn's early critics. Yet it was an essential feature of Haydn's style, and marked him as a Viennese composer. After a delicious arialike Adagio, the quartet danced in another parallel-laden minuet, followed by an aggressive, chunky finale that could have been an early inspiration for Metallica. Weiss's head-banging chords at the end were awesome.

Haydn's stays in London in the 1790s solidified his reputation, and the two later quartets the New Esterházys presented should solidify their standing, as well. Although Haydn wrote no new quartets during his first London visit, the works of Opus 55 (1790) were much in demand. They had previously only made it as far as Paris, where they were brought by intermediary Johann Tost, a former violinist in Haydn's orchestra who later spuriously claimed that he had received the dedication of Opus 64 from Haydn.

Op. 55, No. 1 in A Major (No. 45) is a charming quartet, if somewhat naive. The first movement is heavy with elaborate first violin figurations, which Weiss executed stunningly, but light on motivic ideas. It is a superb example of how Haydn can take the simplest kernels of music and create an extended movement out of them. The most charming bit of this quartet is the quasi-love duet of the second movement, where Kyme and Weiss floated into D major wonderland, supported by the sighs of Skeen and Martin. The joyful rondo of the final movement evoked smiles and winks from the players, in particular when it unexpectedly broke into a fugal passage. What wits.
A Charming Ending
To close the first program of their series, the New Esterházy Quartet chose a quartet from Opus 76, Haydn's last completed opus. Written for Count Erdödy in 1796-1797 and published in 1799, the opus contains some of Haydn's best-known quartets. No. 5 in D (No. 64) is not one of the most famous, but it is certainly one of the more pleasing, especially when it is played as well as it was last weekend. A lighthearted first movement in 6/8 time showcased the skills of Kyme on first violin, with ample chiming in from the other three performers.

The highlight of this quartet is the achingly lyrical Largo: Cantabile e mesto (singing and sad), which positively drips with romantic moments. In a break with convention, Haydn chose to write this movement in F-sharp major, demonstrating his latest predilection for modulation by thirds. Although the key is anathema to string players, the Quartet brought out all of its sonorous potential. A rollicking, scherzolike minuet was followed by an even jollier finale, replete with the drones and stomps of a barn dance.

It was truly a pleasure to see such an accomplished group of musicians present these four quartets. Yet the New Esterházy Quartet's true strength is not in the individual talents they all possess, but in the lively exchange and obvious joy they share as an ensemble. I am all ears for the next 17 programs.