Last weekend saw one of the most unusual events of the piano world, in San Francisco. This was the second Milton and Peggy Salkind International Piano Duo Festival. The three-day festival at the San Francisco Conservatory was packed with five programs devoted to unusual as well as standard works for two pianos, piano duos, and a variety of music for chamber combinations. Then too, there was the strangest looking piano I've ever seen: a double piano invented by Germany's distinguished Grotrian piano company. 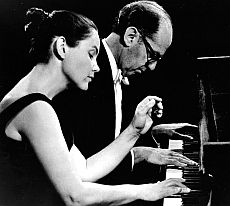 The Festival honors the services of the Salkind Duo, long so important to the Bay Area music scene, both as performers and as faculty members of the Conservatory. The late Milton Salkind even served as president of the Conservatory from 1966, a post he held with distinction for 24 years. Pianist Peggy Salkind has only recently retired after 38 years on the faculty. Besides that, the Salkinds presented all sorts of modern works as well as classics, including commissioning no fewer than 11 composers to write piano duos — including Andrew Imbrie's important concerto for piano four-hands and orchestra.

The second part opened with Brahms' Neue Liebesliederwalzer, Op. 65, for piano duet and vocal quartet as performed by the locally based Bridge Sextet. Then came Schumann's Andante and Variations, Op. 46, for two pianos, two cellos, and horn. That was superbly played by the Riga Duo, the cellists Robin Bonnell and Cathy Allen, plus Meredith Brown as horn soloist. For dessert there was Liszt's flashy Grande Galop chromatique, Op. 12, for piano eight-hands. That was played by the two European teams of Florence and Riga. There were no encores.

The Mozart Variations were very well played by Irene Peery-Fox and Christie Peery Skousen, but the piece struck me as an unfortunate choice. Contrary to rumor, not every note that Mozart set to paper is timeless. His only set of four-hand variations has a pretty tune to start, followed by utterly mundane variations of no distinction. Any of Mozart's four-hand sonatas (five in number) would have been more appropriate, especially if it had been one of the last three duet sonatas of his maturity (K. 386, 497, or 521). Even a fine performance can't compensate for a so uninspired a piece.
Ill-Served Schubert
This poor opener was followed by the least satisfying performance of the evening: of all things, that of Schubert's normally heartbreaking F-Minor Fantasia. Admittedly, playing Schubert in proper mood and style is fiercely difficult. Achieving his smiling-through-the-tears effects is a daunting challenge. The ultrapoignant music of the Fantasia was written in 1828, Schubert's final year, when he was grievously ill and facing death at age 31.

What we got, instead, was an extremely dry-eyed, aggressive performance of this tender, tear-stained piece. The problem was that the Kugimoto Duo was just playing the piano and seemingly was too absorbed with that task to pay much attention to the composer. The performance came across as a tad fast and far too aggressive. Schubert, ladies — Schubert, not Beethoven.

Beethoven's pupil Carl Czerny is best remembered today for his collected training exercises, used for centuries to torment beginner pianists. They're dull listening but extremely effective in whipping young hands into shape. Which is why they've sometimes been made fun of, twice by Debussy. (The first piece of Debussy's Children's Corner suite is titled Docteur Gradus ad Parnassum, after the title of one of Czerny's étude collections, and Debussy's Étude No.1 is also a Czerny parody, with a subtitle that translates How do you like this, Mr. Czerny?)

Czerny was a brilliant pianist, selected by Beethoven to premiere his "Emperor" Concerto. An important teacher, he helped create a number of important piano virtuosi, not least among them Hummel and Liszt. He was also the financially successful composer of some 800 compositions: symphonies, concertos, Masses, and chamber music, as well as a large amount of salon music. Czerny was not just chopped liver. Besides Saturday's Op. 121 Sonata, the Festival honored him on its Saturday matinee with a program entirely devoted to his music for multiple pianists.

The Czerny sonata on Saturday evening was most engaging. It's about the length of the average Beethoven sonata, with a third movement in hunt style, marked "La Chasse." On the surface it would seem to be a standard piano-string trio, but with two people seated at the piano. The string parts, however, are not very functional. They have almost nothing to play. There's a bit of doubling of piano lines here and there, and the occasional pizzicato accent, but never any important solo bits for the strings.

Obviously the piece was intended for family home use, with Mama and Papa at the piano and the two kids as tag-along strings. Maybe, but in any case, the elegant pianism of the Duo Pianistico di Firenze (Sara Bartolucci and Rodolfo Alessandrini) proved wondrously impressive. Their playing is immaculate in all dimensions, and charmingly colorful playing to boot. But after all, they're Florentine. What else could they be?

The Angelo Piano Duo, at the heart of the Bridge Sextet, was also quite fine during the 15 Brahms love waltzes, but, with the exception of tenor Michael Matson, their vocalists were not up to the task. The singing quartet was too often unbalanced, and their German elocution embarrassing. The seven solos offered more of the same. Soprano Mimi Ruiz, in particular, suffers from the soprano ego curse, overblaring and taxing her voice too much of the time.
Pianistic Perfection
That brings us to the super masterpiece, Schuman's big variation set. It virtually defines Romanticism in music, displaying an emotional warmth that's nearly tactile. The Riga Duo (consisting of the Russian Nora Novik and the Armenian Raffi Kharajanyan) are superb virtuosi of high refinement and tremendous musicality. Well-known and much praised around Europe, they made their America debut only on last season's Salkind memorial. Every tiny aspect of the performance was perfect, and was ably supported by the smaller solos of cellist Bonnell and hornist Brown. This was the high point of the concert for me, especially since the odd instrumentation tends to forbid frequent encounters.

Of course, the fact that they were playing on that wonderfully sounding Grotrian double piano helped. After all, Grotrian pianos were Clara Schumann's favorite. She insisted on those high-quality German instruments, with their specially designed sound boards. Only I don't think she ever came across a double piano.

What Grotrian has done is join two pianos together like a pair of Siamese twins in such a way that the players are facing each other. There's only one oddly shaped top to open over both instruments at once, giving the gray-colored instrument an otherworldly aspect. But the sonic effect was magical.

The main thing, however, is that its timbres are so balanced and beautiful, whether in warm legato or in spicy staccato, that the instrument is a real find. Whether it's played softly or at full force, the effect remains the same. All the two-piano works in the concert used it, but none more effectively than the Riga Duo and the Florentine duo.

As a razzmatazz coda to the evening, with Pianistico di Firenze on one of the Grotrian twin pianos and the Riga Duo on the other, we heard a Lisztian short romp for eight hands, played to the tens. In truth, it's a pops piece, not infrequently performed in its orchestral version. Its sheer audacity was great fun, demanding of the pianists but a delight for the audience.