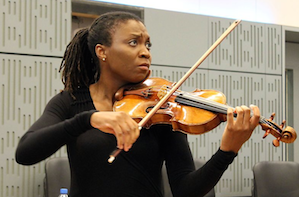 By all accounts, violinist Tai Murray has led a charmed life. After appearing with the Chicago Symphony Orchestra at the ripe old age of 9, she attended Indiana University and then Juilliard. Dubbed “superb” by The New York Times, Murray has played such illustrious venues as the Barbican, Chicago’s Orchestra Hall, Copenhagen’s Tivoli Gardens, and Shanghai’s Concert Hall. And now she has, at last, achieved hipster glory by playing in downtown Oakland. Joined by pianist Ángel Sanzo, she performed a delightfully eclectic program on Saturday in a recital at Holy Names University.

Both the program and the musicians reflected strong, global influences. While Murray resides in New York and Berlin, Sanzo hails from Spain. Their classical interpretations played upon diverse music ranging from American jazz to Javanese gamelan.

The artists’ chemistry was evident from the first moments. Sanzo’s technical prowess provided a smooth backdrop for the ebb and flow of Murray’s effervescent performance. Where Murray evoked lightness and excitement, Sanzo offered a bold, even tone. Amid the emotional swellings of Debussy and John Corigliano, Murray was occasionally overwhelmed by Sanzo’s resolute octaves. Nonetheless, Sanzo consistently played second fiddle (so to speak) to Murray during her lilting solos.

The program began with Debussy’s Violin Sonata in G Minor, the last piece he composed and premiered in public, in 1917. The duo brought to life the rich, multicultural influences that shaped Debussy’s oeuvre, from the Javanese gamelans that inspired him at an early age to the Spanish motifs that pervaded this work. Murray and Sanzo captured the fragility of this atmospheric piece, with Murray’s velvety vibrato and lyrical touch providing a stark counterpoint to Sanzo’s rich tone, emphasizing the semi-dissonant harmonies. Murray flaunted brilliant clarity of tone, exhilarating the audience during rapid passages.

Programming Arvo Pärt’s Fratres, (1977) and Speigel im Speigel (Mirror in a Mirror, 1978) after the energetic interpretation of Debussy, was not ideal. Both pieces reflected Pärt’s signature “tintinnabuli” style (the word derives from the Latin term for “bells”). The composer paired each melody note with one chord, creating “a bell-like resonance,” as per the program notes. Though initially delightful in Fratres, the process grew a bit monotonous by the middle of Speigel im Spiegel. It didn’t help that the broken triad repeated throughout this piece and its cloying nature gave a lullabyesque quality to the work. While the chime-like qualities of Pärt’s style evoked an ethereal simplicity, in the end it was, perhaps, too much of a good thing.

In stark contrast to the ringing repetition of Pärt, the early romanticism of Schubert’s Rondo in B Minor enabled Murray to show a depth of inflection only found in sparks and flashes of the Debussy. Here, the virtuosic flourishes took on a theatricality not found in the previous pieces. Murray and Sanzo conveyed a lively sense of humor in the numerous false endings throughout the rondo.

John Corigliano’s Violin Sonata in G Minor delivered a vibrant shift in mood. This early work, composed in 1963, explored numerous musical styles, from the cool vibes of jazz to the rhythmic eclecticism of Bartók. The Corigliano sonata, which returned to the key of G Minor, ended the concert on a joyful note. The duo once again displayed their strong chemistry and sense of humor, especially in the final movement, where the piano crashed in clusters of notes, while the violin slid down the strings in a slippery glissando.

All in all, this was a strong performance by two highly seasoned musicians, one a rising star in the classical world and the other a notable pianist in his own right. The journey from early romanticism to modernism and the celebration of varied musical influences made for a night to remember.