Monday’s opening concert of the [email protected] festival, at St. Mark’s Church in Palo Alto, packed a fair amount of contrast into one evening. Thirteen performers, of whom only one appeared in more than one work, presented a program of one duo (for two violins), one trio (for piano and strings), one string quartet, and one wind quintet. Each of the four works acknowledged the concert’s theme of “Homage” in a different manner. And the two principal works were played in strikingly different styles. Everything changed except the quality, which remained gratifyingly high throughout.
Mendelssohn’s String Quartet No. 2 in A Minor, Op. 13, was chosen for the concert as an homage to Beethoven, who had just died when it was written in late 1827. Mendelssohn’s quartet specifically evokes Beethoven’s late Quartet in A Minor, Op. 132, composed just two years earlier. His work certainly sounds like late Beethoven. It’s large and somber, with long slow chorales and impassioned recitatives. There’s relatively little fast passagework, and what little there is entirely lacks the distinctively Mendelssohnian airiness of such works as his String Octet.

What’s remarkable about the quartet is not just that Mendelssohn could have written such a serious, mature work at the age of 18 — he’d achieved compositional maturity at about 16, younger than any other prodigy, even Mozart — but that he could have absorbed the complex idiom of late Beethoven, which proved daunting to other composers, so fully and when it was so new. Nor is it a pastiche or mindless imitation, but a fully original work that happens to be in a style like late Beethoven.

To play the Mendelssohn, the festival programmers chose a young ensemble called the Escher Quartet. Though they’ve only been playing together for two years, these performers have achieved the most unified sound that I’ve ever heard from a string quartet. They don’t so much breathe together as count together. It’s a cool, emotionally restrained sound that impresses through its sheer precision and clarity.

The middle voices are the driving engine in this ensemble. The composer gives the viola, played by Pierre Lapointe, responsibility for several key turning points in the music. Wu Jie, second violin, has a notably haunting tone. Together they set the pulse ticking. Andrew Janss’ cello came out most clearly in the finale. First violinist Adam Barnett-Hart played as serenely as the rest. Even his recitative solo passages were taken in a plain, brisk manner. The Escher Quartet remained a unified ensemble, never becoming a soloist with accompaniment.

By the end of the work, this unpretentious lack of elaborate display may have palled a bit. But for the bulk of the music, particularly in the intricate Intermezzo, the dazzling clockwork of the performers was a shining delight.
Honoring Rubinstein
How different this was from Tchaikovsky’s Piano Trio in A Minor, Op. 50, which followed after intermission. Tchaikovsky wrote this work in 1882 as a memorial to his late mentor, Nicolay Rubinstein, the man who had had the courage to tell Tchaikovsky that he should have junked his Piano Concerto No. 1. Despite this, Tchaikovsky honored Rubinstein’s memory, and his dedication of the work was enough to earn it a place in this “Homage” concert.

Chamber music was not Tchaikovsky’s specialty, and the trio’s two monumental-size movements can be monumentally boring. Not this time, however. Pianist Wu Han, coartistic director of the festival, established her command near the beginning when playing the main theme. Heavy chords rather than elaborate figuration are the bent of the pianist’s part in this work, and she never tired. You would not want to meet this piano in a dark alley.

Meanwhile, the two string players gallantly labored out front. Cellist Ralph Kirshbaum has a lush, emotive tone, or at least it certainly sounds that way after the Escher Quartet. Violinist Joseph Swensen, who these days is primarily a conductor, is also a tremendously strong player who held his own in terms of sheer sound. Still, he seemed to be following Kirshbaum emotionally more than being his partner. When Swensen played the theme, it was Kirshbaum’s decorations that caught the ear.

Both men, however, understood the emotional flow of the music. When Tchaikovsky directs the strings to repeat phrases several times, as he does often, they need to build and ebb in the service of a larger musical stream, not just repeat mechanically. In this aspect they were at their most engaging, and in company with Wu Han, they triumphantly moved through Tchaikovsky’s memorial and held full attention right through to the enormous work’s end. There was not a boring moment.
From Ravel to Schnittke
The concert began with two smaller and more disparate pieces. First came Alfred Schnittke’s Moz-Art for Two Violins, one of several “Moz-Art” titles the modern Russian wrote for various ensembles. This one dates from 1976. Schnittke is often dubbed a polystylistic composer, which simply means he did not fully digest his influences before allowing them to appear, only partially transmuted, in his own music. Here he took fragmentary first violin parts from an otherwise lost Mozart pantomime score, K. 416d, and wove them into puckish canons, clashing harmonies, off tunings, harsh ponticello playing close to the bridge, ghostly harmonics, and at one point whistling. It’s only five minutes long, and full of intellectual silliness, including a sudden quotation from the G Minor Symphony, K. 550. Joseph Swensen and his brother Ian played the work with fine good humor. 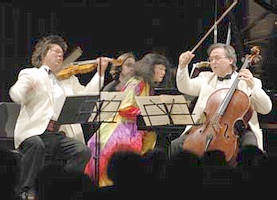 Afterward came Maurice Ravel’s Le Tombeau de Couperin, one of the foundation stones of the neoclassical movement. Ravel aimed to evoke the calmness and intricacy of a Baroque suite, which made this work another suitable “Homage” offering, as well as a fine pairing for the Escher Quartet’s way with Mendelssohn.

Le Tombeau de Couperin has a complex history. Ravel originally completed it in 1917 as a six-movement suite for piano, a form that makes the work sound misty and impressionistic. Later he orchestrated four of the six movements, with a much crisper and drier result. What we heard at this concert was four movements arranged for wind quintet by the hornist Mason Jones, but they’re not the same four as in the orchestral suite. Three, the Prelude, Menuet, and Rigaudon, are the same, but in place of the Forlane, Jones chose the Fugue from the piano suite.

The winds, in particular the oboe, are prominent in Ravel’s orchestration, and Jones’ arrangement often follows that lead. William Bennett played most of the same oboe solos that he would have played with the San Francisco Symphony. But the other instruments traded off solos a bit more. When the wind choir replaces the orchestral strings, the sound of Jones’ arrangement is startlingly new. Carol Wincenc on flute also got to make one interjection on piccolo. William VerMeulen on French horn was considerably more prominent than he would have been in the orchestral arrangement. Carey Bell on clarinet and Dennis Godburn on bassoon completed the ensemble. All were brilliantly clear players who performed with precision and fine ensemble work.

The concert was preceded by a free prelude performance by advanced students from the festival’s International Program. Inna Faliks, piano, Katie Hyun, violin, Wei-Yang Andy Lin, viola, and Yu-Wen Wang, cello, played Beethoven’s piano quartet version of his early Quintet for Piano and Winds, Op. 16, with great delicacy and charm. Esther Park, piano, Jennifer Caine, violin, and Yotam Baruch, cello, were even more attractive in a broad and smooth performance of Beethoven’s “Archduke” Trio in B-flat, Op. 97. Clear arpeggios poured from Park’s hands while Caine and Baruch offered enchanting little interjections. If less mature than the main programs, the prelude performances are satisfying little concerts not to be missed.