Perhaps my expectations have been colored by the approaching inauguration, but Sunday night's performance by cellist David Requiro with the Marin Symphony, now in its seventh year under the able stewardship of Music Director Alasdair Neale, left me with unanticipated though unmistakable feelings of hope for the future of symphonic music-making in the Bay Area. Unanticipated, because the last time I heard the Symphony, in 2002, with a program that featured the same solo showpiece, Tchaikovsky's Variations on a Rococo Theme, Op. 33, the performances were quite disappointing. And hopeful, because this orchestra, made up of some of the finest "Freeway Philharmonic" musicians in the region, has come so far in the past few years. 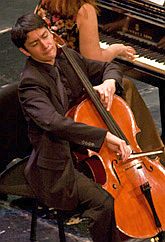 Bartók's Suite from his ballet The Miraculous Mandarin, which opened the program, is a showcase for the composer's skill at orchestration, much like his Concerto for Orchestra, and provided a good opportunity to put the orchestra through its paces. I was especially impressed with the brass and woodwinds, whose playing was at a much higher level than I remember having heard before, though the brass were much too loud at the beginning, effectively burying important string passages.

Unfortunately, Neale's euphemistic vision of the ballet seemed also to shape his interpretation of the music, robbing it of much of its power. Neale presided over some fine, professional-caliber orchestral playing, though almost always with a warm, fuzzy sound that seemed to absorb and overwhelm the brutal, disturbing effects that Bartók was clearly after. There was little likelihood of provoking audience members to walk out, or of getting a reprimand from the civic authorities, as happened at the premiere in 1926. Sunday's performance was pleasant enough, but this music really isn't meant to be pleasant.
A Light Staple
The Rococo Variations, which followed, are almost always performed (as they were on Sunday) from an edition made by Tchaikovsky's soloist, Fitzenhagen, who reordered the variations, omitting the original finale. The work in this form has been a staple of the cello repertoire since its premiere performance in 1876. Since the tuttis are lightly scored and not terribly demanding, the piece is attractive to orchestras because it can be allotted minimal rehearsal time. As a result, it is one of the first "concertos" that young cellists are likely to find opportunity to perform. While these conditions make for frequent programming, they also make convincing performances a rarity.

The Rococo Variations is a light, well-crafted little piece that can be quite effective when approached with a sense of panache and wit. Yet all too often the variations become scarcely more than a series of hoops to be jumped through, while the orchestral interludes serve merely as moments for the soloist to catch his breath before rushing off to meet the next challenge. The performance I had heard in 2002 certainly fell squarely in this category, with pretty ragged, unrehearsed playing from the orchestra, to boot, so it was a relief to hear the Marin Symphony living up to its potential on Sunday, and a happy surprise to hear such an uncommonly refined and poetic soloist at work.

Requiro, an Oakland native, is an exceptionally talented and mature young musician, with an impressive list of achievements already under his belt. He plays with a warm and full but unforced sound, and as a performer he carries himself with a disarming sense of assurance and ease. Requiro effortlessly tossed off the technical challenges of this showpiece, and while I occasionally found myself wishing for a broader palette of colors and more quicksilver turns of phrase, his ideas were thoughtfully inflected, with a playful sense of rubato, and he spun out phrases seamlessly, with an unflagging sense of purpose. I have heard and taken part in more concert performances of this venerable warhorse than I care to remember, yet this is the first one that I have actually enjoyed. I look forward to hearing more from this fine musician.

The first of three suites that Prokofiev arranged from his ballet Romeo and Juliet rounded out the program. A taste of the ballet itself was offered in the penultimate movement, when dancers Aaron Thayer and Erin Yarbrough-Stewart of the Smuin Ballet joined the orchestra on stage for a captivating performance of the famous balcony scene. Inventive performances like this are a welcome recent development in audience outreach programs — a much better alternative than conventional "pops" concerts, in my opinion — and this small taste certainly left me wanting more.

The orchestra itself was impressive throughout the Prokofiev. While entrances were not always as precisely coordinated as they might have been, and some of the virtuosic string ensemble passages were a bit blurry, the sound was always warm, and the overall effect was a sense of calm professional assurance. As in the Bartók, I would have liked a stronger moment-to-moment sense of direction from Neale, with more sharply defined lines, but the large-scale shapes were clear, and this was a most convincing, satisfying performance.