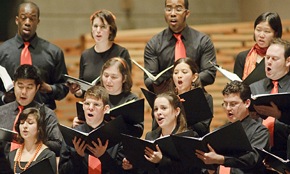 he wonderful International Orange Chorale was new to me until I heard its concert Friday. Also new to me was the venue, in downtown San Francisco, referred to as Atrium Public Space in publicity and Solarium Public Space on the program. The Chorale is amateur, in the best sense of the word — made up of excellent musicians who sing for the love of singing. They are helped by the superb conducting of Artistic Director Zane Fiala.

The concert was free, and the space was informal — a large room with a few chairs scattered around tables and lining the walls. The singers were dressed in black highlighted by orange or red scarves and ties (orange being the “official paint color of the Golden Gate bridge,” identifying them as San Franciscans). Informality was the order of the day, beginning with an invitation to the audience to join in vocal warm-ups.

The ambitious program, ranging through a variety of styles, was sung a cappella. The Chorale needed no instrumental support for pitch and rhythm. The singers are masters of accurate intonation, dynamic variety, tight ensemble, and expressive nuance. In a program called “Northern Lights: Luminaries of Scandinavian Choral Music,” most of the composers are still living and are Scandinavians or of Scandinavian origin. Languages included Swedish, Danish, German, English, Sami (a Lapp language from northern Sweden), and Latin. The latter was sung in “Ecclesiastical Latin,” an Italian pronunciation that is historically authentic for generations of American singers and audiences and continues to be used, even though the Roman Catholic Church has switched the Mass (and the masses) to the vernacular.

The 19th-century composer Wilhelm Stenhammar set a poem by a Danish poet, Jens Peter Jacobsen, perhaps the most harmonically conservative setting on the program. The Chorale sang it beautifully, and then proceeded to a new, more dissonant piece by chorus member Joshua Saulle. It was a setting of e.e. cummings’ i am a little church, rooted in the rhythms and joys of nature, and included a soprano solo, which Elaine Russell Robertson sang with a lovely, pure sound. Last year’s audience had voted the piece its favorite.

For this year, the chorus premiered another piece by one of its members, Mari Valverde: Månskenskväll (Moonlit evening), on a poem by Swedish poet Edith Södergran. Written with nice attention to the qualities of different parts, from soprano to bass, and with close attention to visual images, it got a fine performance.

Swedish composer Bo Hansson’s setting of Psalm 13, called Lighten mine eyes, begins with the men’s voices, adds the women’s, and weaves a rich tapestry out of staggered entrances. The singers caught the psalmist’s dark beginning, the plea to God to lighten his eyes, and his final contentment with God’s help.

How to Choose From Among Excellence?

Members of the audience were urged to pick up a ballot and vote for the piece in the concert that they liked best. It would be hard for me to choose. It might come down to two pieces. One is Jan Sandström’s Biegga Luohte (The Holy Spirit comes like the wind). The poem is in Sami, a Lapp language from northern Sweden. Shouting, singing, echoing, and leaping between loud and soft, the “wind” blew — lo, lo, lo, lo — in intricate rhythmic patterns with great gusto, especially in the solo singing of bass Nathan Hays.

My other favorite was the extraordinary Immortal Bach, by Knut Nystedt. The chorus formed a big circle, surrounding the audience. The piece began with Bach — three lines from his chorale “Komm, süsser Tod” (Come, sweet Death), beautifully sung. Then the singers went back to the first line, which began to dissolve into increasing dissonance, the sound holding for a long time (breaths individually taken so that the sound was continuous). Fiala stopped conducting, and tones changed ad libitum from voice to voice. (I didn’t ask whether the final chord was all the 12 half-notes of the scale, but knowing Nystedt’s birth date, 1915, encourages that conjecture, as Schoenberg was well-established by then.) Fiala ended the first line, and then started the second, which got the same treatment, as did the last line: “Come lead me in peace.” It was a magnificent performance of a splendid piece of music.

Latin was the language of the first two and the last two pieces, all liturgical and all relatively tonal harmonically. Hymne à Saint Martin by Vaclovas Augustinas and a Sanctus by Jan Sandström nicely combined dissonance with basic harmonies. The more dissonant O Sacrum Convivium by Fredrik Sixten was grounded by a pedal point — a single tone that kept going throughout the piece, a device described in program notes as representing “the constancy of the Blessed Sacrament.” Unicornis Captivatur, an ancient text set by Ola Gjeilo, made a captivating ending. The voices were artfully distributed: Sopranos began a verse in unison, and then repeated it with an alto part added. All voices rejoiced in an Alleluia. A hushed bass entry on “Three days long, the Lion slept” grew into added entries as “the King awakened it with a roar.” Well-roared.

A third new piece by a local composer, Peace, by Aaron Pike, served as encore. The echoing acoustic of the room prevented the listener from understanding any of the words besides the title word — an apt reminder of how important it was that texts and translations had been provided in the printed program.