It is fitting that San Francisco Opera's new production of Iphigénie en Tauride (Iphigenia in Tauris) feels extremely contemporary. Indeed, Gluck's work, which premiered in 1779, would have sounded revolutionary in its time. Christoph Willibald Gluck set out to reform opera, starting in 1762 with Orfeo ed Euridice, in order to strip it of all the complexities and decorations that he felt were unnecessary. Although still expressive and beautiful, the works that emerged were nonetheless radically more streamlined than those that came at the beginning of the 18th century.
Just as the work must have been striking to audiences at the time, the San Francisco production (shared with the Lyric Opera of Chicago and Royal Opera, Covent Garden) made a powerful and visceral impact.

Heard on opening night (last Thursday) and running through June 29, Iphigénie contains a few minor hiccups, but for the most part delivers both musical strength and dramatic intensity. The star was the impeccable Susan Graham, whose portrayal of the tormented priestess was arresting in its commitment and strength. She shone vocally, singing with passion and spontaneity. Particularly moving was Iphigenia's first aria, "Non, je n'éspère plus" (No, I no longer hope), in which she pleads with Diana to be reunited with her brother. Graham sang her character's desperate supplications wrenchingly, without ever crossing into melodrama. 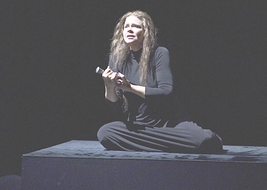 The cast, which contained many current and former Adler Fellows and Merolini, was generally strong. Danish Baritone Bo Skovhus sang Orestes, Iphigenia's brother; Paul Groves sang Orestes' friend Pylades. Mark S. Doss sang Thoas, the King of Tauris, while the priestesses were sung by Virginia Pluth and Sally Mouzon, both members of the S.F. Opera Chorus.
Brisk Musical Momentum
Conductor Patrick Summers, a former Merola participant himself and now music director of the Houston Grand Opera, kept everything moving briskly. At the time he composed Iphigénie, Gluck had moved to a style that seems almost through-composed (the music doesn't repeat from stanza to stanza), with little distinction between recitative and aria, the former being accompanied by the full orchestra, rather than secco, or accompanied only on continuo.

This production's recitatives proceeded quickly, which allowed them to seem quite speechlike. Under Summers, the orchestra produced a fine, nuanced sound that contributed greatly to the sense of drama. In certain places, however, its fortes overpowered the younger singers.

The Chorus sang from the orchestra pit, leaving the interpretation of events to a group of dancers, all clad identically in black. The curtain rose on a bare stage that held nothing but high, black walls. With the exception of a rising platform, the stage stayed bare for the course of the opera, creating a feeling of entrapment that rendered realistic sets and props unnecessary. Stark white light was projected from the sides, adding to the dark, claustrophobic feeling.

Just as the score still bears traces of the Baroque standards that Gluck hoped to eliminate, choreographer Phillipe Giraudeau's stage movement, which was highly stylized and contrasted movement with static poses, bore more than a slight resemblance to Baroque gesture.

Even with the power the dancers emanated, I cannot help but think that the effect would have been even more telling had the singing and dancing been done by the same people. Still, the disembodied feeling that the offstage singing provoked gave the impression that the text was being thought or prayed, rather than said out loud. This was not the only instance of something tangible being turned into a psychological effect.
Disembodied Goddess
Indeed, the "deus ex machina" appearance of Diana, descending to save Orestes and Iphigenia, also was transformed into something much less tangible. Instead of floating down from the fly space in some elaborate stage machinery, Adler Fellow Heidi Melton sang from the back of the house, which fit much better with the production's stripped-down austerity. Her commands were steely, yet still full.

Occasionally the singers (apart from Graham, whose commitment to the movement was complete) seemed awkward in their own bodies. Most had moments in which they seemed to struggle with the concept of modern yet not naturalistic expression. These improved throughout the show, however, and will undoubtedly disappear as the run progresses.

As Orestes, Skovhus sang with directness and intent. His character's torment and anguish were clearly played. He made it seem as though he could truly feel the weight of the world on his shoulders. His singing occasionally lacked legato, though, and his diction could have been clearer.

As his companion, Pylades, tenor Paul Groves presented us with a caring and compassionate friend. His warm, light tenor sound emphasized this, and his singing was nicely phrased and shaped. Thoas, the king of Tauris, was sung with great force by Mark S. Doss. He seemed to forgo legato lines in favor of a declamatory style, which effectively supported his portrayal of a controlling monarch.

Despite its few uneven spots, this production, directed by Robert Carsen, is compelling and powerful — and has already won great acclaim for the splendid Susan Graham. The psychological renderings of the events and emotions may sound overdone when discussed, but they do not feel that way when experienced. Rather than some updated productions that leave the audience feeling empty or disengaged from the drama, this one remains approachable, even considering its more conceptual aspects.