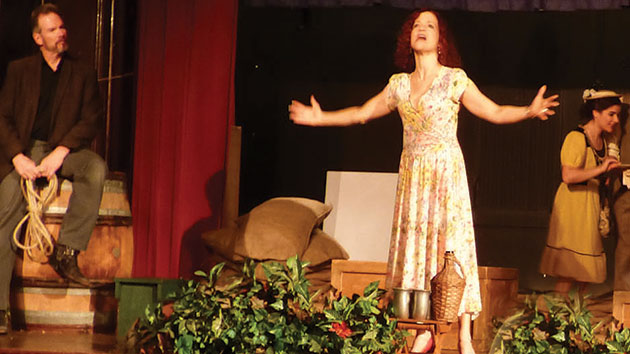 Island City Opera presented two contrasting one-act operas in the Elks Ballroom in Alameda, Sunday afternoon: Il Tabarro (The Cloak) by Puccini, and Rossini’s comic Signor Bruschino. Eileen Meredith, co-founder of Island City Opera, has employed 20 singers and 18 orchestra members, all paid professionals, plus an army of volunteers and donors of props and costumes, and brought them all together in an accommodating ballroom with a usable stage.

Il Tabarro is based on a short story set on a river barge in Paris. Giorgetta, the wife of Michele, the barge's owner, has a lover, Luigi, one of the stevedores. Puccini’s music, passionate and melancholic, builds to an inevitable climax as Michele discovers that Luigi is his rival, and kills him. He covers Luigi’s body with his cloak, and when Giorgetta comes to meet Luigi, lifts his cloak to reveal the body.

Eileen Meredith, an excellent singer, was Giorgetta. The others in the cast – tenor C. Michael Belle as Luigi, baritone Michael Rogers as Michele, mezzo-soprano Alix Jerinic as ragpicker La Frugola, and tenor Alfredo Rodriguez as a song seller – were uniformly accomplished and sang well.

After intermission, comic relief was provided by Rossini. Signor Bruschino was set, in this production, in the Bay Area (unlikely as that may seem). Gaudenzio, guardian to Sophia, wants her to marry  Bruschino’s son. Sophia loves Florville, who pretends to be Bruschino’s son, and forges a couple of letters to prove it. Bruschino refuses to identify Florville as his son, but quickly marries the two. When Gaudenzio learns that Florville is the son of the man who defeated him when he ran for mayor of Berkeley, he is outraged, but has to accept the marriage.

There were some ragged entries from the orchestra in the Rossini, but overall the singers were well supported. Michael Shahani was the conductor, and also gave a helpful pre-concert lecture.

In fact, all 20 singers contributed effectively to the performance of these operas. Seeing and hearing them is an enjoyable experience. Two more performances will take place: March 13 at 7:30 p.m. and March 15 at 2:00 p.m.