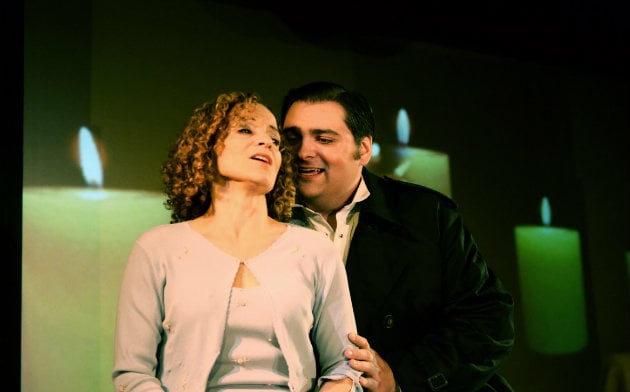 Island City Opera opened its second season with a beautifully sung Rigoletto last weekend. Verdi’s grand work is surprisingly engaging done on a small scale as it was at the Elks Lodge Ballroom in Alameda on Jan. 24. The straightforward staging in an intimate venue coupled with the quality of the singing certainly made for a fine performance.

The set had very little furniture and the costumes seemed more or less contemporary. There were distinct oddities as far as fashion was concerned — Gilda wears an embroidered twin set with a puffy formal skirt in Act I and Maddalena seemed to wear a black brasserie outside of her black tank dress.

There were video projections on a single screen upstage, which were either overly obvious or, occasionally, baffling but very easily ignored. References to the curse of Monterone, for example, were accompanied by the floating glare of this character projected over ominous clouds. Act II had enormous, red rose petals falling and lighted candles floating through space as if on an invisible brook. This came off as cheesy rather than inventive.

However, stage director Olivia Stapp is above all respectful of the singers, which makes sense given her long career as a soprano. She kept the chorus together so that everyone sounded cohesive and had the main arias sung near the center of the stage. In such close quarters it was easy to be drawn into the story. 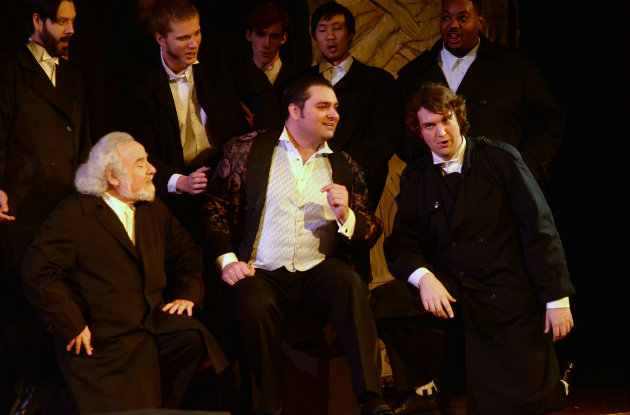 There were many familiar faces on stage. Baritone Jo Vincent Parks radiated pathos as the title character, while soprano Eileen Meredith conveyed youthful sweetness as Gilda, with her bright voice. Meredith has good control of her instrument and blended nicely with Parks. Both Parks and Meredith are staples of the Bay Area opera scene, Parks often performing with smaller companies and Meredith in the chorus of San Francisco Opera.

Tenor Alex Boyer — known to local audiences as a participant in San Francisco Opera Center's Merola young artists program and as a recent resident artist of Opera San Jose — shone as the Duke of Mantua. His appealing sound was particularly impressive in "La donna è mobile," which was the high point of the opera.

In fact, the entire third act was strong; the singers sang well together and were convincing. Silvie Jensen (Maddalena) seemed truly infatuated with the Duke and her pleas to Jason Sarten as Sparafucile were wholly believable. It was perfectly effortless to overlook the flaws in production and focus on the drama of the voices.

The weakest link of the production was the orchestra. The first two performances were conducted by a stalwart, Jonathan Khuner; Jason Sherbundy takes over this weekend. Though the musicians did play with earnest spirit, they were not well synchronized and strings were not always in tune. Part of the problem was that the orchestra was over on one side of the stage (there is no pit, as is often the case for venues available to small opera companies.) On the happier side of things, the brass played with clarity and the orchestra supported the singers, never overwhelming or detracting from the arias.