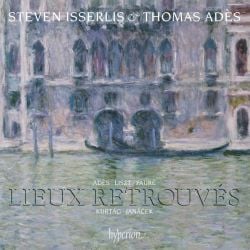 The title of the disc belongs to the last piece on the chronologically ordered program, Adès’ own Lieux retrouvés (roughly, “Remembered, or revisited, places”). Taking Isserlis’ booklet notes at face value, the entire impetus for the recording was to record the newish (2009) Adès work, along with music by composers whose influence contributed to it. Isserlis’ notes, though droll to the point of overkill, are very informative indeed. Still, I don’t think the explanation quite washes; there’s really too much in here that sounds less like “music Thomas Adès has been influenced by” than like “music Steven Isserlis would love to record.” Overlapping categories, I’d bet.

Lieux retrouvés is in four movements, each named for an environment. “Les Eaux” (The waters) begins with the sort of tenderly tonal music that it’s hard to imagine a 21st-century composer meaning anything but ironically, unless you’ve heard other Adès compositions, like his string quartet Arcadiana. All the same, the waters grow very choppy very soon, before subsiding and then gathering in a sudden massive torrent.

“La Montagne” (The mountain) turns out to be about hikers rather than the mountain itself, and this is where I thought the parade of influences making up the rest of the program was a trifle incomplete. I can’t hear Janáček or Fauré or even Kurtág in there; it sounds more like the love-child of the pizzicato movement of Frank Martin’s Études for Strings and a wandering bit of Conlon Nancarrow. (If that sounds at all interesting, you probably need to hear this.)

The third movement, “Les Champs” (The fields), though, does suggest Kurtág, in the extreme simplicity of the material and the extreme attenuation of the sound. Isserlis says in his notes that he has never had to play such high notes “lyrically,” and I can believe it; solo cellists are up in what’s called “nosebleed territory” all the time, but not generally playing sustained, slow, and pianissimo. It’s a fragile and uncanny sound.

Isserlis says in his notes that he has never had to play such high notes “lyrically,” and I can believe it.

As for the last movement, a raucous depiction of “Le Ville” (by which I think Adès means not “the town” but “the city”), it’s hard to describe — think basically a mashup of Offenbach’s “Can-Can” with everything under the sun. I can well believe that it’s the hardest thing (technically) that Isserlis has ever had to play, as he writes; it’s positively demented. Also, marvelous.

The rest of the disc isn’t quite so momentous, though I think the contents might be nearly as unfamiliar to most people. The three Liszt pieces at the top of the program are all things Liszt arranged multiple times. I knew Romance oubliée only as a viola-and-piano piece, and had naively assumed that it was an offshoot of Liszt’s transcription of Berlioz’ Harold en Italie, what with the viola arpeggios at the end, like the end of the second movement of the Berlioz. Apparently not: Liszt did over all three of the pieces here a number of times. As a group they’re a tad depressing, especially with La lugubre gondola (The funereal gondola), all eight-plus minutes of it, bringing up the rear. That said, they afford basically constant opportunities for gorgeous cello sound, and that Isserlis can produce whenever he likes.

The Liszt pieces afford basically constant opportunities for gorgeous cello sound, and that Isserlis can produce whenever he likes.

Janáček’s Pohádka (it’s translated here just as “A tale”; in most English-language editions you’ll find in such music shops as still exist it’s called “Fairy tale”) is, as Janáček goes, pretty genial and gentle music. It’s probably the most-often-heard music on this disc, being colorful, fairly brief, and not hideously demanding. Isserlis is kind enough to give us the gist of the tale in question, and then to play the actual part to essential perfection.

Late Fauré is the sort of acquired taste that a lot of people haven’t acquired quite yet. I have, and the Isserlis/Adès recording of the Second Sonata is magnificent. The trouble with this music, if you haven’t (so to speak) been bathing in it for a while, is that it’s so annoyingly seamless. Nothing ever quite stops or articulates anywhere, so the only way you can shape it internally is by small phrases inside bigger ones, and very careful dynamic gradations.

This performance does that marvelously. Everything in the outer movements goes in long, long arcs. It’s spangled in those outer movements, but specially in the last, by extremely brilliant playing by Adès, of a piano part that I think other pianists have tried to soft-pedal (not necessarily in the literal sense), lest they upstage the cellist. That last movement simply soars, and it’s not just the cello line that does it.

The four Kurtág pieces, all of them small-to-tiny, and three from the ongoing set called Signs, Games, and Messages, are all for solo cello, and all breathtaking in their simplicity and, well, humility. The remaining piece is one that Kurtág wrote as a memorial to Isserlis’ deceased wife. Nearly everything here is brief, quiet, fugitive, equivocal. The last of the four, “Györgi Kroó in memoriam,” is as simple as Arvo Pärt’s Spiegel im Spiegel, and as moving, while barely moving (in the other sense) at all.