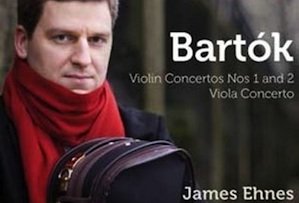 Violinist James Ehnes’ bio begins with a quote from the Toronto Globe & Mail hailing him as “the Jascha Heifetz of our day.” Now, this is silliness. There is no Jascha Heifetz of our day, in the sense of anyone whose sound is as unmistakable as his was, and the comparison does no one any favors. All the same, we have some extremely fine violinists nowadays, and Ehnes is one of them.

Béla Bartók’s three string concertos practically span his compositional career, with the first of the two violin concertos dating from 1907, the second from 1938, and the viola concerto, one of his final projects, left incomplete (in places barely sketched) at the composer’s death. All are reasonably common on disc these days — the first violin concerto being, for a couple of reasons, the rarest — though I don’t believe any player has thought to put all of them on a single CD before. But James Ehnes is an unusual musician.

For one thing, disappointingly few top violinists dare to double on viola. At least two (Nigel Kennedy and Pinchas Zukerman, the latter being indeed as prominent a violist as a violinist) have recorded the Second Violin Concerto and the Viola Concerto together, but that — and all other violin/viola doubling — remains a rarity. Most players specialize in one instrument or the other.

The popular wisdom is that playing viola messes up your violin intonation. I can attest from my own experience that what it mainly messes up is your bowing: Play violin after playing viola, and you’re apt to use more force and weight than you should, and it takes time to readjust. But until fairly recently, in historical terms, there wasn’t really any such animal as a violist. If you played violin you could play viola, and the other way around. We could use more Ehneses.

His account of the Bartók Viola Concerto here (with Gianandrea Noseda conducting the BBC Philharmonic, as on the entire disc) is a fine one, lyrical and impetuous in all the right places, tightly articulated, well-paced, and for the most part impressively sonorous. I do get the impression that the Guadagnini viola he is using isn’t terribly large; certain places on the C string seem a little pale. Even so, it’s the best performance I’ve heard in some years.

Ehnes uses, like nearly everyone else, the first completion of Bartók’s draft, the one by Tibor Serly. (The draft is mostly “short score,” meaning that it generally contains the solo line plus a few lines for the accompaniment, with notes for orchestration; there are also a couple of notorious ambiguities about which bit is supposed to go where. Serly’s version, lavishly orchestrated, had been the standard so long that when a thorough revision prepared by the composer’s son was issued, in 2003, violists generally ignored it.)

The violin works here get at least equally fine performances. I think the most impressive thing is that Ehnes has made me reevaluate my impression of the First Concerto’s second movement. Bartók wrote the work for an early flame, violinist Steffi Geyer, but they had a falling-out, and it was never performed until after her own death in 1956, when the manuscript came to light. In the meantime the composer had recycled the slow first movement into a piece called Two Portraits, in which the second movement (titled “Grotesque”) is a savage orchestral parody of the first.

This is the form in which you’re most likely to encounter that music now, and until hearing this recording, I’d thought that was all for the best, because the flashy second movement — there are only two — had always seemed silly to me, after the seraphic ending of the first. Ehnes and Noseda make something of it, though. That wacky opening cadenza doesn’t put me off as it once did, and the momentum through the rest of the movement makes it not seem overlong.

And in terms of momentum and pacing, Ehnes’ Second Concerto is another winner: never flagging, never rushing, bending in all the right places, and savage and tender by turns. The man has a fierce bow arm, and the BBC Phil some equally fierce brass. The arc of the slow-movement variations is meticulously controlled without ever sounding micromanaged or mincing; things just happen as they ought to.

Ehnes is in the midst of a Bartók project right now, with a disc of the two sonatas with piano and the two Rhapsodies due out early next year. I assume there’ll be a third, with the Solo Sonata and ... what? Contrasts? The 44 Duets? Whatever’s in there, keep an ear cocked. This guy can play.