It's hard to say what's more improbable: creating a successful opera about the Jerry Springer Show or to wait a decade before its West Coast premiere. It should have started here, don't you know.

Richard Thomas' Jerry Springer the Opera is a multiple award-winning, much-praised work, developed with the support and participation of Cameron Mackintosh, Andrew Lloyd Webber, Nick Hytner, and other notables. 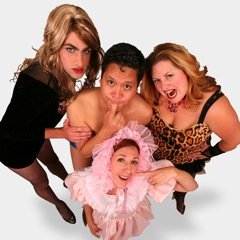 It finally made its profane, foul-mouthed, offensive, and hilarious entry last weekend in a big, spectacular Ray of Light Theater production at the Mission's Victoria Theater, the beginning of a five-week run.

However small Ray of Light may be, their work is fully equal to acclaimed productions in Europe, and it sports an American idiom that makes it more authentic and enjoyable. This is genuinely American EuroTrash by substance, not by a director's artifice.

There is just one major, but correctable, problem in the Mission District production: Amplification is gross, both in size and quality. It's an injustice to some of the fine singers in the cast and an obstacle to the understanding of the Stewart Lee-Richard Thomas text.

The first act of Springer consists of three episodes typical of the TV show, about mind-bogglingly complicated love-sex-hate relationships, diaper fetish (great vocal performance by Chris Yorro, who later sings the role of Jesus), and a rather large woman (Jessica Coker, another big voice) aspiring to be a pole dancer.

The seemingly never-ending second act takes place in Hell where the Devil (Jonathan Reisfield) forces Springer to present a show in which Satan, Jesus, Mary, Adam, Eve, and God ("It's hard to be me") fight each other, for the spotlight of the show, and for Springer's attention and loyalty. 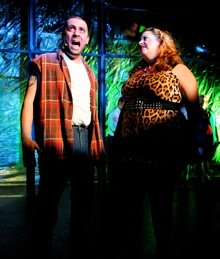 Even here, there are some notable highlights, such as the spirited chorus line of hooded Ku Klux Klan members tripping the light fantastique. Still, while the material in the first act is fresh and unique, when it comes to the clash of Heaven and Hell in the second act, it's been done, better, by Shaw's Don Juan in Hell and Goethe's Faust, with its musical apotheosis in the Epilogue of Boito's Mefistofele, and in Mahler's Eighth Symphony, among others.

Thomas' music is not fully operatic (except for some Handelian choral numbers, such as the "Overly-ture"), so could better be called a musical, a good one. Ben Price conducts a small, hard-working band, and he follows, rather than leads, the singers. The talented cast of 40 (!) is directed by M. Graham Smith on a tiny but large-looking set, designed by Maya Linke.

Speaking of Wagner, I first saw Springer eight years ago in Edinburgh — on the same day of the Abbado-conducted Salzburg Parsifal. The strange coincidence led me to see things that are perhaps not there: similarities between the two works.

Both require a more than usually determined suspension of disbelief, and both are about fools. Wagner's, of course, deals with the Noble One, a hapless, anti-swan Candide of the Grail, while Springer is about an ignoble (although curiously innocent or, at least, out-of-it) buffoon, surrounded by trailer-park trash, worthy of the most poisoned pen of Rabelais and Voltaire. 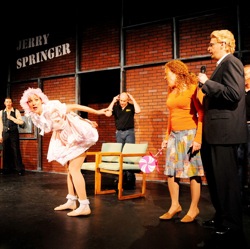 There is also a parallel in the heroes' journey: Parsifal is pursued and (temporarily) thwarted by Kundry's temptations, Springer is haunted (unsuccessfully) by his "inner Walkyrie." As for blasphemy and anti-religiosity, Wagner was extremely subtle, Springer is really in-your-face, at least until the syrupy mock sentimentality of the finale.

Responses to Springer will vary widely, from early walkouts to great enthusiasm. As for mine, much as I detest the TV show and dislike machine-gun delivery of "filthy language," I had a blast at Springer, at least during the first act.

I liked the stories (none of which can be described in polite company), the bits of inner monologue under spotlight, the pathetic but somehow likable characters demanding attention and love, the variety of music — not all good, certainly, but with a strong kernel of a musical work that goes far beyond a spoof or one-line joke.

There is energy and aliveness to the work that make it entertaining, enjoyable, even attractive, beyond the obviously objectionable nature of it all.