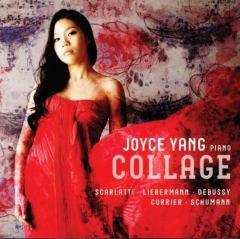 If you’re a pianist — or any musician, really — who’s planning a CD containing multiple works, you can pick related pieces by the same composer and create an entry for the library shelf, or you can structure it like a recital, with a variety of compositions to show off your chops and keep the audience interested through a continuous playing.

Joyce Yang, the 25-year-old pianist who is here presenting her debut disc, chose the latter course and appropriately titled the result Collage. Its contents are not just a scattering; they relate to each other in interesting ways. Look at what Yang has done with works by the contemporary American composers Sebastian Currier and Lowell Liebermann. To pair Currier’s Scarlatti Cadences with actual sonatas by Domenico Scarlatti (1685–1757) is no more than clever; to notice that the inner movements of Liebermann’s Gargoyles echo the harmonies and soft movement of Debussy, and to prove this by placing that composer’s Estampes next to it, borders on the crafty.

The two Scarlatti sonatas are both in D minor, the courtly K. 9 and the rattling K. 141. Yang begins the album with them, playing both with wit and liveliness. Scarlatti Cadences, which follows, takes characteristics from both sonatas, with gentle outside sections framing a crunchy middle. It resembles Scarlatti rather as Prokofiev’s Classical Symphony resembles its model, Haydn, by using the older composer’s stylistic features with later-day harmonies and a more contemporary looseness. To show what Currier can do when he takes the Scarlatti braces off, Yang cuts loose in the next track with his Brainstorm, a “raucous” (Currier’s own word for it) toccata, all tumbling figures and crashing chords, which still has some of that 18th-century crispness and intricacy to it.

Debussy’s Estampes follows — three movements of Impressionist scenic picture-painting. The movements inspired by Indonesian gamelan and Spanish guitar don’t sound like their models so much as evoke their images. The gamelan, indeed, could have come from Scarlatti by way of Currier, at least as Yang plays it, with tightly focused fast phrases emerging out of the smooth, plush harmonic background. The final “rain in the garden” movement begins with thunderous resolve, and then settles back into a heavy yet gentler fall of notes, with a wondrous sense of color.

Yang’s Debussy is almost pushy and certainly extroverted next to the soft, quiet introspection in the inner movements of Liebermann’s Gargoyles. One movement is slow and the other fast, yet the continuous fall of notes even in the latter is a softer, lighter rain than in Debussy’s garden. It’s as if Liebermann more resembles Debussy’s image than Debussy himself does.

That’s just the inner movements, though. The fast outer movements of Gargoyles are loud, big-boned, and declamatory, broader and more expansive than Currier’s intricacies. Yang’s determined handling of Liebermann’s jumpy, rhythmically irregular drama looks forward to the big finale of the program, occupying not much less than half of the entire running time: Schumann’s Carnaval.

Yang plays this classic suite of miniatures at a moderate tempo, as crisply as her Currier and Liebermann, taking a classical rather than a romantic approach to the work. She gives little chord rolling or fluctuation of tempo, except when it’s necessary. She commands enough flexibility of style to play the “Chopin” piece in the rolling wash associated with that composer, and to add a touch of gentle sentimentality to the end of “Valse noble.” The Adagio, “Eusebius,” is of slowly uncontrolled tenderness, and so quiet and closely miked that you can hear the piano keys squeak. The greater impression of this Carnaval, however, is one of strength and vigor. Sudden fortissimo chords in several movements are deliberately startling. The most fun moments come with the staccato “Reconnaissance” in a sort of boogie style, and the tightly delivered rhythmic “snaps” in “Arlequin” and “Coquette.”

Overall, from this album I’d call Yang a pianist with strong fingers, sure rhythmic control, and a cool emotional approach, who nevertheless has the capacity to play tenderly or mistily when she considers it appropriate for the work. Now: with five different composers spanning three hundred years on the album, where do I shelve it?