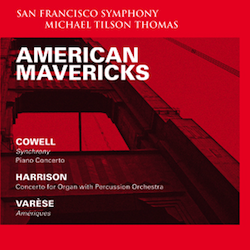 It isn’t a bad idea: If you have spent much of your tenure as a music director promoting “American Mavericks,” well, record some.

It needs to be said at the outset that no one could possibly have done it better than the San Francisco Symphony and Michael Tilson Thomas do it here on this Hybrid SACD recording. Even so, it’s dangerous to build a case about American exceptionalism around music of this particular time.

Take Henry Cowell’s Synchrony, for example. The amazing, long opening trumpet solo might have come from any time in the last century, but the entrance of the orchestra afterward is pure ’20s. You could slot that lovely harmonic shimmer into Milhaud’s 1920 Boeuf sur le Toit with only a few listeners tracking the form so much as noticing.

In the same way, Edgard Varèse’s use of sirens in Amériques isn’t particularly “mavericky” or particularly American. I don’t know whether the first version of the piece (between 1918 and 1922) had sirens in it, but this version (1927, the year Varèse became an American citizen, and hence eligible for official American Maverick status) came six years after Paul Hindemith ended his Kammermusik 1 with a siren.

(There’s a passage about 6 minutes into the Varèse that’s practically identical to the Cowell “harmonic shimmer” I just mentioned.)

This is precisely what music in the ’20s sounded like, in America and in Europe.

This is precisely what music in the ’20s sounded like, in America and in Europe. Or, rather, it’s one of many threads in the skein of “music in the ’20s,” and the idea that the American part of that decade was somehow exceptional is just hubris. Everyone was experimenting; everyone was messing about (until the experimenters in the USSR were systematically stamped out, but that’s a tale for another day). American exceptionalism is all very well, and we certainly have a Ben Franklin tinkering-with-stuff strain that has few counterparts in other places. But, honestly, in the ’20s, everyone was doing it.

The outlier on this disc is Lou Harrison’s Organ Concerto, which is 40-plus years younger than anything else here, and also quite magnificent. The accompaniment is a percussion orchestra, and the piece is ingenious in innumerable ways. For starters, it makes you appreciate the full possibilities of an orchestra of percussion.

I do think that our mavericks are as good as any and that you could not possibly find a better introduction to them than this one.

It’s the outer movements of the five that have the full “batterie” (as the French call a percussion section), but the slight mallet percussion in the third and fourth movements is miraculously beautiful, and the long dialog between organ solo and piano in the third movement riveting. (I’m assuming that the pianist was the S.F. Symphony’s Robin Sutherland, but as the booklet is mum about the orchestra, apart from the soloists, we can but guess.)

The second movement is that rare thing, a concession to the nerds in the audience; it’s a double canon for solo organ. Trust me: It’s worth the listen.

Paul Jacobs is marvelous in the Harrison; Jeremy Denk is perfectly magnificent in the Cowell concerto (where “fistfuls of notes” might, for once, be strictly accurate); and the San Francisco Symphony sounds like nothing else on earth. I don’t think that there is anything special about our particular breed of “mavericks,” but I do think that ours are as good as any and that you could not possibly find a better introduction to them than this one.