An afternoon with the Kaleidoscope Chamber Orchestra is unlike that with any other ensemble I know of — at least until the others start copying them.

The ambience is casual, the turnout gratefully spans the age spectrum. There are no tickets; the admission price is “pay whatever makes you happy,” whenever you want, before or after the concert or even after you get home. Taking pictures and videos on smartphones and sharing them on Facebook, Twitter, or Instagram is not only allowed, it is encouraged as a way to spread the word. (They do, however, draw the line at flash photography, and ringers have to be silenced.) And the organization served free ice cream confections, cookies, and drinks on the patio after the concert.

Most gratifying of all, the orchestra is good. KCO doesn’t use a conductor and doesn’t need one. These young, highly-skilled musicians listen intently to each other, and their unified attacks and phrasings sound as if they had been rehearsing for months. In closing their fourth season in Santa Monica’s First Presbyterian Church on May 13, they offered a pretty convincing mixture of what they do, juxtaposing hot-off-the-press premieres with older classics — in one case, a really old classic.

First off the mark was the world premiere of And the River by Donald Crockett, a long-respected member of L.A.’s new music community and currently the chair of the composition program at the USC Thornton School of Music. A concerto for duo-pianists and chamber orchestra, And the River was partly meant as a memorial to Crockett’s late friend and colleague, Steven Stucky, but there was nothing somber about the piece’s ravishing washes of color after a brief raucous opening. 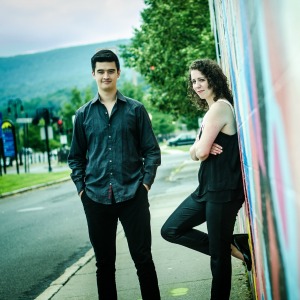 Crockett gave the piano duo HOCKET (Sarah Gibson and Thomas Kotcheff) a lot of unorthodox things to do — cross-handed four-hands work on a Steinway grand, manipulations of the piano strings, excursions on a pair of white toy pianos that blended surprisingly well with the ensemble. Early on, the brass seemed to evoke the style of Lutoslawski, whom Stucky practically worshipped, and there was an exceptionally beautiful passage at the 15-minute mark for swirling strings and flute with deep brass and percussion punctuation. The piece is definitely worth hearing again sometime.

The concert then shot back almost a millennium in time to an uncredited string orchestra arrangement of O Virtus Sapientiae by Hildegard von Bingen (1098-1179). In this form, with drawn-out solo string meditations over a drone from the rest of the group, the music sounded as if it came from India — complete with occasional subcontinental glides.

Christopher Cerrone’s High Windows, a West Coast premiere, also featured a string orchestra distilling elements from more than one century. Starting with a paraphrase of a Paganini caprice, the piece used repetitive and additive methods that gradually gathered strength until blossoming into a threnody of great beauty at the work’s center point.

Now, what could KCO do with a piece of standard repertoire? No worries there, for the full ensemble gave Beethoven’s Symphony No. 1 a unified account that was fresh, fleet, and just weighty enough, managing to combine gravitas with joy. And the group’s playing was undoubtedly enhanced by the church’s attractive, not-overly-resonant acoustics.

If I had been hearing Beethoven 1 for the first time — as I suspect many in the room were — I’d run out and buy or stream a recording of it immediately after this excellent performance. And very few members of the audience seemed to be taking advantage of the freedom to use cellphones, a possible sign that Kaleidoscope’s mission is working.