Five of the Bay Area's many inventive musical experimentalists were on display last Friday at the Royce Gallery in San Francisco, in the initial installment of Pamela Z's summer chamber music series called "room." This first of four concerts, to be given every other Friday through July and August, was titled "Batterie!" and featured performers who all made use of percussion in some way.
The concert included solo sets by Suki O'Kane, Matt Davignon, Amy X Neuberg, and Moe! Staiano, plus a final set in which the above four were joined by Pamela Z herself. Each of the performances was unique and engaging, and the concert made a fine platform for some of the many original, quirky musical souls who populate the Bay Area and make it such a richly creative place. 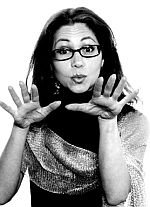 I have seen Neuberg and Staiano perform in the past, while O'Kane and Davignon were both new to me. Neuberg, who opened the program's second half, sings original songs while playing MIDI drums and using various knobs and pedals to manipulate the resulting sounds in various ways — mostly by looping and layering patterns, but also through pitch changes, distortion, and other effects.

Her songs typically combine memorable melodies and appealing rhythmic grooves, along with abrupt, surprising shifts. The lyrics are witty, at times disconcerting. Her vocal styles runs the gamut, from operatic to pop-y to a wide variety of nonsung vocalizations. She sang four songs on her set Friday, two old and two new.

The newest song began with her shaking a bottle of pills and looping the rhythmic groove this created. A series of clever verses followed about sundry fears and neuroses of the modern world, each ending with the line "… You can recognize the pills by the sounds they make," at which point she picked up a different bottle of pills and shook it in a new rhythm to build a cross-rhythm with the previously looped pill bottle pattern. This happened four or five times, building up a complex texture of overlaid pill-bottle-shaking patterns.

This technique exemplifies a trait common to many of Neuberg's songs: the fusion of the means of making the sounds (the shaken pill bottles) and the subject matter of the songs (things that cause one to need to take more pills). The medium reflects the message and vice versa, giving her work a poignancy beyond that achieved by merely exploring neat effects with her gear.
Like a Man Possessed
Next up was Staiano, a maniac of a percussionist who will bang on or smash into pieces just about anything he can get his hands on, and somehow make a compelling musical statement out of it. The last time I saw him perform, it was with his enormous MOE!KESTRA!, a deafening ensemble of multiple drummers, electric guitarists, amplified strings, and wind players, in a performance that culminated with his unleashing a sledgehammer on an old upright piano, hacking it to bits, in the musical equivalent of ritually sacrificing a virgin to the gods. 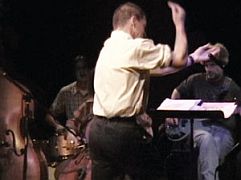 By comparison, Friday's performance was relatively calm, though it still featured his usual manic intensity, and it still ended with instruments and shards of material strewn all over the floor. Staiano was like a man possessed as he banged on drums with all sorts of different objects, suddenly flinging them away if they weren't doing what he wanted, lunging for another instrument, banging on the floor, on the support beams, and on the records he had strewn across the floor until they eventually shattered into pieces, thwacking a baseball bat with drumsticks as it balanced precariously across two drums, and setting a bunch of vibrators loose on cymbals strewn across the floor.

The above description might sound silly, but Staiano is absolutely mesmerizing to watch, and the audience members were literally on the edge of their seats; indeed, many actually stood up at times the better to see exactly what Staiano was up to. What separates him from a young drum student having a tantrum is that every sound Staiano produces is captivating; his timing is impeccable, with constant surprises. As thrillingly impulsive as he appears, it all somehow ends up making sense.

A friend who came to the show with me compared him afterward to Jackson Pollack. Staiano is indeed like a Jackson Pollack of music, impulsively splattering sounds seemingly at random, but in the end creating something surprisingly coherent and even beautiful. Staiano taps into those dark, secret urges we all have toward violence and destruction and transmutes them, unexpectedly, into art. 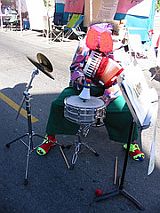 O'Kane opened the program sparsely, with soft snare-drum hits, bass drum hits, and the gentle sound of sand being dribbled onto a cymbal, each sound event separated by vast stretches of silence. Gradually, the hits got closer together and the performer worked in other instruments, including what might have been crotale-like bells, but that turned out to be a set of silverware. Even with all the silences, a sense of pulse underlay it all. And there was something gridlike in how everything lined up, including O'Kane's own physical motions when picking up and putting down instruments and beaters. A cymbal, spun on its edge until it crashed to the floor, brought the work to an emphatic conclusion.
Coaxing New Sounds From the Machine
Following O'Kane, Davignon coaxed a startling array of sounds from the instrument you might least expect to hear on an experimental music concert: a basic electronic drum machine. Davignon hooked his drum machine up to all sorts of processors that could mess with the sounds in numerous ways — loops, delays, pitch shifting, and various other manipulations. The piece began with what I can best describe as "robot-in-the-jungle sounds," a spectrum of sounds at a wide variety of frequencies, like you might hear in the incessant animal and insect chatter of a rainforest, but with a decidedly electronic flavor to them. This moved into some deeper, more-dronelike sounds, oscillating in thirds and expanding out into denser, richer harmonies. 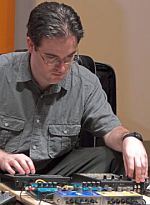 Later on, Davignon constructed a gradually layering patchwork of polyrhythms and what sounded to me like a popcorn popper that was fed with tiny marimbas instead of corn kernels, which finally ended in widely vibrating drones. It was well-paced, frequently hinting at, but never quite landing in, a predictable rhythmic groove, and it was full of fascinating sounds.

The concert closed with the above four performers joining forces with Pamela Z in one of her own compositions, plus an improvisation. Z's work, called Matter Mater Tick Tock, had a strong rhythmic drive, with Z singing rapturous vocals while the others laid down interlocking rhythmic patterns. The group improvisation was enjoyable, as well, though it felt a bit busy and unfocused. Its most effective moment was the big, exuberant group buildup just before the end.

It was a real pleasure to see such different artists, each with his or her own quite distinct vision, on one concert. Pamela Z is to be commended for putting this series of concerts together and providing some publicity and institutional support for such a range of artists.

Every major city has its symphony and its opera and its various new music ensembles, yet what other city can boast a Moe! Staiano or an Amy X Neuberg? This concert made me feel proud of the variety of quirky talent we have in the Bay Area, and thankful to be in a place where I am surrounded by such uniquely creative people.