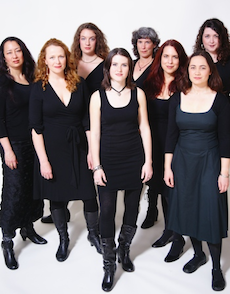 I can imagine no more compelling way to have celebrated Women’s Day this year than by positioning your ears, eyes, heart, and soul in the audience at Piedmont Piano Company on Friday evening for a clarion performance by the Kitka Women’s Vocal Ensemble.

Within walking distance of their Oakland home office, seven of the Kitka singers and a special guest (Kristine Barrett), garbed in wispy ethnic gowns and elegant necklaces, managed in one fell swoop to introduce two new works, under the program title “New Folksongs From Within”; spin stories in several languages about women’s unity and victory over adversity; and showcase the beauty and power of the female voice.

The program and its title had been inspired in part by a residency a year ago by the visiting Serbian singer and performance artist Svetlana Spajić, who’d urged her Kitka hosts to expand on their 33-year acquaintance with Eastern European and Balkan-Caucasian music by having their own members create original compositions. Taking up the challenge were Janet Kutulas, a former orchestral and chamber flautist who joined Kitka in 1988, and Elizabeth Setzer, who came on a couple of decades later, after Fulbright-funded study in Bulgaria.

At the start of the program, Kutulas expanded on her printed notes with a spoken introduction to her brand-new Iron Shoes, bearing a story line and libretto fashioned from Romanian and Russian fairytales, with allusions to romance, jealousy, animal transformation, a witchlike woman, and the title iron footwear, in which a heroine must make her weary way along her fated path. In the first of Kutulas’ seven musical sections, she augured her and Setzer’s modus of creating new music based on the scales, harmonies, and rhythms of folk music from Kitka’s source region. Birdlike cackles preceded the sort of diaphonic harmonies familiar to Kitka fans, with a melody line winding around a drone, and lyrics based on ancient Greek and Macedonian.

The following section waxed more explicitly theatrical, with composer Kutulas and Kitka Executive Director Shira Cion in the roles of Evil Sisters, commenting in English and eliciting chuckles from the house. In her third section, Kutulas set a plodding but enchanting tempo, matching the pace of the title iron shoes. The challenge to the heroine in the fourth section involved marriage to a pig, about which she remarked, “No mistakin’/I like bacon.” Always well-liked by audiences, Kitka’s intoning in English, with occasional funny bits, only served to make the group more accessible, even to the kids present.

Kitka’s intoning in English, with occasional funny bits, only served to make the group more accessible, even to the kids present.

The fifth section served up a treat in the form of the lovely Caitlin Tabancay Austin bemoaning her fate in Ukrainian and Russian, in what sounded like a 12-tone folksong, over an a cappella vocalization of Schubert’s Theme and Variations for Flute and Piano by the rest of the ensemble. Sun and Moon, in the persons of Kelly Atkins and Michele Simon, commented in song from their celestial perspective on the human condition in the sixth section, and then introduced a mythical Slavic witch, who through Kutulas’ clever libretto got to comment, in the seventh and final section, on the venue, Piedmont Piano Company, and its “day job” as an expansive instrumental showroom. “I love the shape of all these pianos,” exclaimed Shira Cion in her character Baba Yaga’s crone voice. “They’re curvy, womanly, and very powerful.” Simon provided some percussion on spoons in this section, and the ensemble ended with the nonmusical sounds of accentuated aspirations.

Kitka exhibited the same care and precision with this new material that they’ve long applied to folk repertoire and material from external composers (including Meredith Monk). Singers changed their physical positioning between sections, as well as their assignments of solo and sectional responsibilities, to best serve both the music and the story line. Cion said the production of Iron Shoes may someday evolve into an opera, if the fates and funding allow.

During the intermission, Piedmont Piano Company’s Jim Callahan confided that he’d welcome inquiries from classical soloists and ensembles eager to join his venue’s predominantly jazz-oriented bookings. The place is invitingly clean, well-lit, spacious, and easy to get to.

Elizabeth Setzer’s Apple Blossoms and Brine, also in seven sections, began and ended with a clarion call that showcased how Kitka’s vocalizing, modeled on the region of its repertoire, differs from classical convention by favoring a vibratoless sound issuing from the front of the face. Setzer’s libretto, entirely original and in English, proved generally less elaborate and more repetitive and chantlike than Kutulas’, in certain sections (the second, for example) setting up enchanting rhythms over sweet melodies. The third section employed an ecstatic yodeling technique, evocative of recordings of the Aka Pygmies of Central Africa.

In the latter sections of her piece, Setzer played an elongated Fazioli grand piano, positioned at the rear of the staging area. The keyboard accompaniment was sometimes evocative and sometimes superfluous, with a rather New Agey affect. Percussion was added by Corrine Sykes on the goblet-shaped dumbek and Simon on the tar, a round frame drum. Sykes elsewhere deployed the stringed Georgian chonguri, but all instrumentalists sang while they played, maintaining the ensemble’s stunning coordination, often involving non-Western time signatures and harmonies, without benefit of conductor. While section 4 displayed complex multipart voicings, section 5 sounded octave unisons, and spun out its melodies with Middle Eastern modes and ornamentations. Even when the melodic figures were limited and repetitious, they were borne up by the loveliness of the voices.

Kitka and its in-house composers are to be credited with engendering a musical offering, repeated throughout the weekend, that appeared both enticingly exotic and warmly familiar, demonstrably appealing to multiple generations and ethnicities.