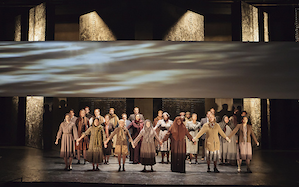 About a year ago I was at a dinner party where the topic of John Adams’ opera The Death of Klinghoffer came up. I said I had seen the Peter Sellars production when it had its premiere in San Francisco in 1991 and thought it was a remarkable work — thought-provoking and profound. I also thought it was an act of artistic cowardice on the part of Los Angeles Opera, which had been a member of the original coproducing consortium, to fold under pressure and not present the opera.

It was at this point that an older gentleman, clearly of the Zionist persuasion, entered the conversation. He proudly proclaimed that he had been the board member most responsible for the decision to cancel the production.

I told him I thought he had done a real disservice to the Los Angeles opera-going audience by denying them the chance to see the production and make a decision for themselves.

“It’s anti-Semitic! And it condones terrorism against Israel,” was his response.

“No,” he answered defiantly.

And so Los Angeles was denied the chance to see a production of The Death of Klinghoffer for almost 25 years, until last Sunday, when Long Beach Opera (or LBO, a company that has often boldly gone where L.A. Opera fears to tread) presented the Opera Theatre of Saint Louis' 2011 production at the Terrace Theater in Long Beach. (The final performance will take place at 2 p.m. next Saturday, March 22.)

The production seems determined to create a look and dramatic approach that stresses a balanced point of view. It creates emotional/political waves, but not a tsunami.

Tensions in the Middle East have not changed much since the hijacking of the cruise ship Achille Lauro in 1985, or since the debut of the opera in 1991. Jews and Palestinians continue to carry on their religious/territorial blood feud that, as the opera so poignantly emphasizes, has roots dating back to the Biblical days of Abraham.

What has changed is the American opera audience, which has come to recognize John Adams’ singularity as a composer. I hope, judging by the fact there were no protesters in front of the theater, that saner, artistically inquisitive minds have prevailed.

Sellars’ production, designed by George Tsypin (the man who recently gave us the opening and closing ceremonies at the Soichi Winter Olympics), presented a great, metallic, shiplike structure, complete with internal ramps between the decks. And when the climactic moment came, and Leon Klinghoffer was executed and thrown overboard, his body and wheelchair fell in transcendently slow motion as Adams’ orchestral crescendo swelled like a storm at sea. 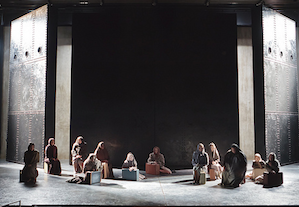 The Saint Louis production is more controlled and somber in tone, especially in the moment of Klinghoffer’s death, which is never seen. The set is defined by the massive, porthole-marked side of the ship. The stage, which represents the deck, is atmospherically enhanced by a succession of black-and-white film projections that depict the sea under a crescent moon, blowing desert sands, and Leon Klinghoffer’s wheelchair sinking into the depths.

It’s been a long time since I saw Sellars’ staging, but it seems to me it was more chaotic and intense (by design) in its handling of the highjackers and the reactions of the passengers. The LBO production is quite different. Directed by James Robinson with set design by Allen Moyer, costumes by James Schutte, lighting by Christopher Akerlind, and projection design by Greg Emetaz, Klinghoffer takes on the aura of a ritually enacted pageant. It’s an interpretation (and one that I agree with) that, at its core, The Death of Klinghoffer is a contemporary passion play floating on the poetic imagery of Alice Goodman’s remarkable (though at times impenetrable) libretto. It’s also a saga of Biblical proportions, told in terms that evoke Bach’s Saint Matthew Passion.

The Long Beach cast is excellent, as is the large chorus that intones the opera’s all-important choruses, which allow the story to transcend the level of a news flash on CNN.

In many ways the opera is a memory play, during which the captain relives the incident in an attempt to understand and reconcile the role he played in it.

Lee Gregory plays the captain of the Achille Lauro, a man caught in the middle of a disastrous situation. And in many ways the opera is a memory play, during which the captain relives the incident in an attempt to understand and reconcile the role he played in it.

The terrorists are a desperate band, driven by a lethal combination of bloodlust, revenge, virulent anti-Semitism, and painful personal histories. They are not, however, cartoons, as such characters are all too often portrayed by Hollywood. Whether their actions are justifiable can be argued. Yet the circumstances that have brought them to take their desperate, perilous action cannot.

The group is led by Jason Switzer, as Mamoud, followed by mezzo-soprano Peabody Southwell as Omar, Roberto Perlas Gomez as Rambo, and Alex Richardson as Molqi. Robin Buck gives a galvanizing performance as Leon Klinghoffer, but the real star-turn performance is by Suzan Hanson as his wife, Marilyn. Her final scenes, and the ultimate “Stabat Mater–like” aria, are heartbreaking.

Danielle Marcelle Bond delivers a memorable cameo as the British dancing girl who finds the whole thing entirely too too much.

The orchestra is conducted ably by Andreas Mitisek, LBO’s artistic and general director.

It’s ironic that at the same time LBO is presenting Klinghoffer, L.A. Opera is presenting Benjamin Britten’s Billy Budd, a decidedly similar story of conflict at sea and the fateful decisions made aboardship.