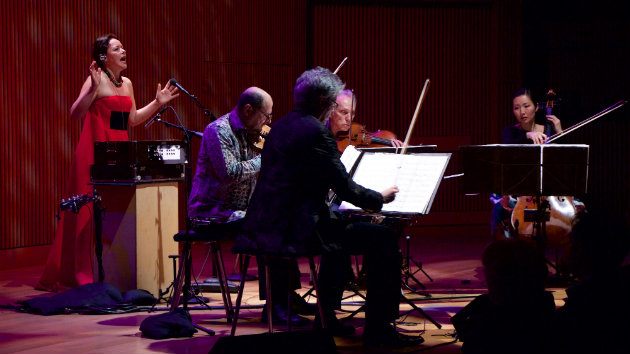 When a local quartet makes it big, its hometown often becomes more of a crash pad than a residence. Each year the Kronos Quartet develops new works during its many months abroad, yet this rigorous touring schedule often leaves little time to reprise these projects in the Bay Area, first violinist David Harrington said. Through Explorer Series, the quartet’s second annual festival at SFJAZZ, Kronos was finally able to bring home the fruits of its labor.

Thursday’s opening night program sampled “a kaleidoscope of music” from vastly different regions that, paradoxically, produced similar effects. Kronos — David Harrington and John Sherba, violins; Hank Dutt, viola; and Sunny Yang, cello — is known for its adventurous spirit, but accessible, tuneful music characterizes the majority of its programs. Although several of the works on Thursday’s concert were written within the last year, few had anything new to say.

That’s not to say that the program was without interest. Osvaldo Golijov’s arrangement of “El Sinaloense” (“The Man from Sinaloa”), a bawdy song by Severiano Briseño, was a delight. String and brass students from the Ruth Asawa San Francisco School of the Arts joined Kronos in a jubilant performance that was also impressively clean.

Another highlight was Azerbaijani composer Franghiz Ali-Zadeh’s Rǝgs (Dance). Written in 2015, this episodic work develops a series of dances, ranging in character from quirky and rhythmic to lyrical and sparse. Though accessible, Ali-Zadeh’s score is far from simple: Its textural complexities create challenges for the ensemble that made this world premiere sound like one.

The comparatively shallow Four, for Tango — written for Kronos in 1987 by Astor Piazzolla — received a surprisingly sloppy performance, particularly from first violinist Harrington. In N. Rajam’s Dadra in Raga Bhairavi, arranged by Reena Esmail, the ensemble was tightly coordinated: Cellist Yang, in particular, rendered the highly ornamented melodic lines with fluency. But aside from introducing an unfamiliar genre to a new audience, this arrangement does little for the string quartet or for Hindustani music. 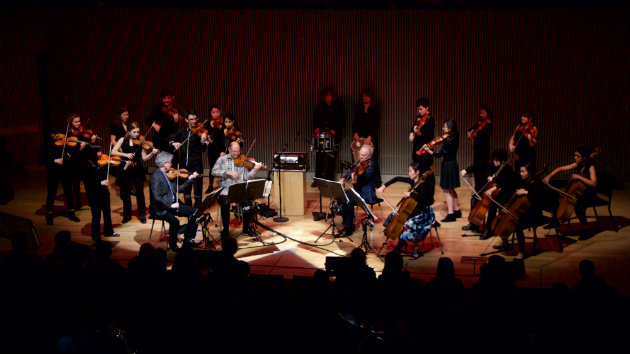 Poor use of the quartet also characterized the first selection from pipa virtuoso Wu Man’s Four Chinese Paintings (2015), her first composition for the medium. “Gobi Desert at Sunset” is pretty, but the sustained tremolo texture lacks interest and reads as amateurish (San Francisco-based composer Danny Clay is credited with realizing the composition, and it’s unclear exactly who did what — perhaps something was lost in translation). However, the other selection, “Silk and Bamboo,” uses dynamic three-voice heterophony against a percussion beat (played with conviction by violist Dutt) to compelling effect. It’s frothy and charming in a way that recalls the second movement of the Ravel Quartet; the audience loved it.

Had the program ended after these five short, consonant works, it would have been a forgettable evening. Fortunately, for the last 20 minutes of the program Ukrainian composer/vocalist/harmonium player Mariana Sadovska joined Kronos in a riveting performance of her Chernobyl.The Harvest, a piece that, at last, made an impact.

With a richly complex text that intermixes fragments from the official announcement of the evacuation plan with traditional widow songs and lullabies, Sadovska’s work reflects on the Chernobyl disaster and the resiliency of survivors. Much of the piece — the driving post-minimalist string passages, the harmonium’s droning like radio static — evokes industry, yet there are also mournful melodies, including a particularly moving viola-voice duet in the first movement.

Sadovska has described herself as “more a singing storyteller than a composer,” and Chernobyl.The Harvest is less a chamber work than a monodrama, immersive as a story and large in scope. Sadovska is a nuanced and emotive performer who, despite singing in a language few San Francisco audience members understand, commands the stage. If her performance at times grew extravagant, it at least had a strong point of view, taking the risks that were so lacking in the first part of the program. This was a souvenir worth keeping.