The Lamplighters, trust me, will never do,
What most opera outfits are descending to,
Putting traditional operas into modernish dress,
And winding them up in a vexatious mess. 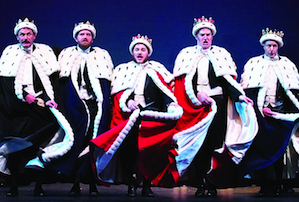 So on Friday, true to its 61-year tradition, San Francisco’s prize-winning company put on the bestest Iolanthe, with classic G & S look and style, in Walnut Creek’s Lesher Center for the Performing Arts. Iolanthe is, after all, the most charming of the canon but then, to paraphrase another great show, “If I’m not at the G&S show that I love, I’m in love with the G&S show that I’m at.”

If high enough, performance level can convince you that night that the show is the top of the line. That’s what happened Friday. For one thing, viewed with even moderate imagination, Iolanthe pokes fun at our own time, needing no updating. Who cannot think of our Congress when hearing Private Willis declaim, “When in that House, MP's divide, If they’ve a brain and cerebellum, too, They’ve got to leave their brain outside, And vote just as their leaders tell ‘em to” ? Or later sung, “The House of Peers, throughout the war, Did nothing in particular.”

Iolanthe, soi-meme, is a fairy pardoned after 25 years banishment into a stream on her head, for the fatal transgression of marrying a mortal; but though “centuries-old” still looks 17. Which causes Phyllis to take her as a rival and break with her fiancée, Iolanthe’s son Strephon. He’s an Arcadian shepherd, fairy to the waist and human from the legs down (a point that elicits giggles). Iolanthe is sprightly played by a bright soubrette, Michelle Schroeder. Our Phyllis was Alexandra Sessler, with a shiny, narrowly focused soprano, clean on the top, her action a bit less than flexible. Samuel Rabinowitz, fine baritone, the Strephon, has the stuff for a stage career. 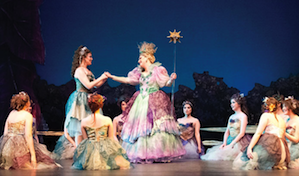 Phyllis elects to choose one of the 13 or so be-wigged MP's who, in their ermine trimmed robes, have earlier marched on — “Bow, bow, ye lower middle classes, Bow, bow, ye tradesmen and ye masses.” She tries to choose between either Lord Mountararat or Lord Tolloller (the name is, I presume, Gilbert’s poke at the British conceit of pronouncing names funny, “Tagliafero” as “Tolliver” and the like). Tolloller was the briskly reactive John Brown, whose body was topped with a keen tenor that has metal in it. Mountararat was one of the four veterans in the cast, remembered from 1989, William Neely, singing firmly in a very mature low baritone. Their duet over which of them was to sacrifice self for the other, and later, their danced trio with the Lord Chancellor, “Faint heart never won fair lady,” were delights.

In the latter central role, veteran No. 2, F. Lawrence Ewing was the show’s lode star. His performance of the Nightmare song (“When you’re lying awake with a dismal headache”) was as clean, crisp and peppy as you’ll ever hear it – and I’m talking as far back as the D’Oyly Carte in the ‘30s. Veteran No. 3 was William Neil, bass, a dry, doughty Private Willis. Veteran No. 4 was MP Jeffrey Beaudoin. Typically, director Barbara Heroux fused all this into a smooth, effortless flowing production, with ingenious touches throughout.

Among these winners was Cary Anne Rosko, the first slender Queen of the Fairies in my experience, with a deep and engaging mezzo soprano and sly stage presence. Her fairy lieutenants Fleta, Leila, and Celia, were in order, Heather Tinling, flighty and funny, Kateyln Neumann, pert and pleasing, Stephanie Dietz, good and true, backed up by the top-flight chorus of Fairies. 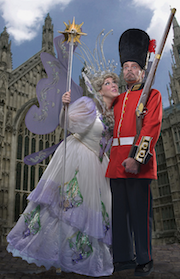 Typically, director Barbara Heroux fused all this into a smooth, effortless flowing production, with ingenious touches throughout. The whole was choreographed fancifully by Lord Chancellor Ewing himself and that covered much of the movement in the show. Jean-Francois Revon’s stage design was a charmer, Act 1 a sylvan landscape as good for fairies as for MPs, Act 2 a nicely cockeyed London in the evening. Honors for the elaborate and colorful costumery are shared by John Gilkerson, Christina Weiland, William Jones, and Melissa Wortman.

Deserving top mention was the ensemble refinement produced by veteran Baker Peeples, the conductor who drew on as clean and sparkling continuity as could be wished, with the choruses (true, save for one stray moment), the solo ensembles and best, the orchestra of veterans, ranking Freeway Philharmonickers all, excellent, from top — Lucy Schoening, flute and piccolo — to bottom, Carl Stanley, string bass, playing as if this were a recording.

The Lamplighters’ Iolanthe, which right out-of-the-box behaved as though deep in its run, will be repeated at the Mountain View Center for the Performing Arts, August 10-11 for fortunate Peninsula folk and those who go the extra mile, and then at the Lam Research Theater, Yerba Buena Center, San Francisco, August 16-18, and the Bankhead Theater, Livermore, August 24-25.