Comparisons are odious, as was famously said, but are often appropriate and startling. Take for example the season in the 1980s when Johann Strauss II’s Die Fledermaus by the Lamplighters was a better show than the one by the San Francisco Opera. On Sunday afternoon in Walnut Creek’s Lesher Center, the Lamplighters’ new Fledermaus seemed to me a better show than the Metropolitan Opera’s current version. That’s at least as heard over the radio, a lumpish new dialogue by Douglas Carter Beane and caricatured dialects dragging it to the provincial.

This one here was fresh and lively, crisply paced by the Conductor George Cleve and Director Barbara Heroux. Singing is the thing, and this cast was on top of its game. After a little initial roughness in her middle high register, Lindsay Thompson Roush sang the challenging Rosalinde role, rich and clear, and was a comic charmer. The Czárdas (“Homeland”), sung by Roush playing the pretend Hungarian princess, was both funny and songful.

The production’s new translation by David Scott Marley was also fresh and pleasing, but not always naturally singable as the one we’re accustomed to. (The lyrics were shown in Supertitles.) His dialog was good and tasteful, didn’t stretch for laughs, didn’t need to.

The Gabriel von Eisenstein, butt of Dr. Falke’s “bat’s revenge,” was Martin Lewis, handsome as his fine-tuned light baritone. He made the slick bounder, Rosalinde’s husband, a delight. Interesting that the part of Frank, the prison warden, was matched very well to Lewis by Samuel Rabinowitz, with smooth baritone voice and lightness of comedic movement. As Adele, Rosalinde’s chambermaid who gets into the Prince’s ball in one of her mistresses’ gowns, Elisabeth Russ nearly stole the show. She nailed the “Laughing Song,” her coloratura, bright and clear in all the highs. A pert, sharp, and quick comedienne.

Casting Elliot Franks as Prince Orlovsky was a smart stroke. This Orlovsky sang the mezzo soprano part engagingly (“Chacun à son gout”), the posing and Russian accent just right. As Rosalinde’s presumed and presuming lover, the unremitting tenor Alfred, Mark Kratz, sang in as Italianate a voice, clean and focused as you’d want. Fairly new here, he should catch on. 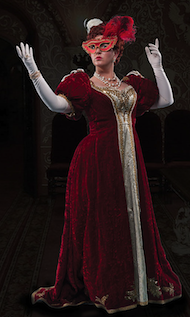 The Lamplighter trusty veteran, William Neely, was a natural for the prank-master Dr. Falke, singing in his vintage, that is, venerable baritone. Others were Bruce Hoard, the Jailer, funny enough without Frosch’s usual old clownish schtick, Christopher Focht, the lawyer Dr. Blind, and Jennifer Mitchell, Adele’s cousin Ida.

All rode happily on the stream of this scintillating score provided by The Lamplighters’ excellent orchestra with George Cleve conducting smartly. His elegant taste and touch, a light baton just for the music and no show, produced this musical flow as good as it gets. When they got into the sentimentally Viennese “Brother mine, Sister mine” it was touching.

The sets were well-done with one basic frame painted in the Klimt manner for all three acts, and the costumes were very attractive, stylish and in the proper mode. Tom Segal’s choreography and training capped Act 2 with a great whirling waltz and prancing polka. With its immortal tunes, it can’t be beat. It’s the best of all operettas and The Lamps did it justice. Full marks.

By the way, four of the roles are double cast, the others to be seen in some of the repeats in Yountville next weekend, then the following three weekends in Livermore, Mountain View and finally San Francisco’s Yerba Buena Center. Don’t dare miss it.