13 Ways of Looking at the Goldberg
By Brett Campbell , 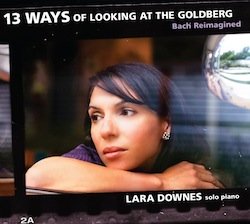 When I heard Lara Downes perform music from her intriguing new CD, 13 Ways of Looking at the Goldberg, at a wine bar in Portland, Oregon, she didn’t announce any of the names of the composers whose new variations on J.S. Bach’s immortal aria she was playing. Instead, starting with Bach’s aria, the UC Davis artist in residence played half a dozen or so of the pieces back to back, just as you’d hear Bach’s original Goldberg Variations in performance. At first, this annoyed me, as I wanted to adjust my expectations according to the composer’s name. But then I realized that it made me really focus on the music (Was that a 12-tone piece? Did I hear a little jazz thing happen? Is it 12-tone now? Ah, there goes a fugue!) instead of preconceptions, which made me listen much more intently.

I recommend the same unprepared way of first listening to Downes’ new CD, which, along with the titular baker’s dozen of new variations, contains Bach’s original and a reprise, plus bonus tracks by Lukas Foss and Dave Brubeck as well as another Bach piece that means much to her, the Sarabande from the French Suite BWV 816. At both her Portland performances, Downes (who credits Glenn Gould’s famous 1955 recording as a major inspiration for her career) said the project felt like a journey rather than merely a collection of diverse interpretations, though it’s certainly that as well. By the time her performance ended, in part because I didn’t have a preconceived notion of each port of call, I did feel as though I’d made a journey through musical time and space.

William Bolcom: Yet Another Goldberg Variation

Commissioned by the Gilmore Festival and premiered by the great new-music pianist Gilbert Kalish in 2004, the set lives up to its Wallace Stevens–derived title by presenting varied perspectives on one of classical music’s hardiest perennials, forcing not only a new look at Bach but also an appreciation for how much stylistic variety our present era affords composers and listeners. The composers didn’t consult one another, and the responses vary wildly. Several take the familiar melody as a starting point; another seems, at least initially, to follow the harmonic structure; and others appear to partake of little more than its mood. Fred Lehrdahl’s take is surprisingly playful; Jennifer Higdon’s is characteristically ebullient and rhythmically charged, with fleeting touches of Chopin and Mozart; Foss’ mood is ruminative, a little wistful. Only whispers of the original flit through Bright Sheng’s dissonances and Mischa Zupko’s probing explorations, while Ralf Gothóni’s Variation on Variation With Variation sticks closest to Bach. Ryan Brown’s delicate Ornament and jazz pianist/composer Fred Hersch’s Melancholy Minuet live up to their respective titles. David Del Tredici’s My Goldberg sounds a bit like Rachmaninov’s might have, with a blue moment.

William Bolcom’s rising-and-tumbling Yet Another Goldberg Variation is the most fun, while his former student Derek Bermel’s Kontraphnunktus is, unsurprisingly for this delightfully unpredictable composer, the set’s most arresting, built on an insistent 11-note theme initially unrecognizable as Goldbergian. I can imagine many of these “reimaginings” actually entering the repertoire as encore material. As she did live in Portland, Downes plays them all persuasively, with due regard for their stylistic differences, yet always retaining a Bachian flavor.

At the Portland performances, Downes enthusiastically chatted with audience members about her project and even solicited their responses (including musical and artistic ones) to the music. Coupled with the informal venue, her presentation truly brought the audience closer to the music in a way I wish could happen more often with new sounds. She made the audience feel like fellow travelers on this exceptionally rewarding journey.