Here’s the bottom line: You’ve got to hear L’Arpeggiata’s Los Pájaros Perdidos. An immediate contender for “Best of 2012,” its 20 astounding performances of “South America’s Living Baroque” are so free, so seemingly spontaneous, and so filled with life that it’s hard to resist the temptation to dance, or at least stand up and shout.

For the recording, the 11 instrumentalists of Christina Pluhar’s 12-year-old baroque ensemble draw freely on their skills at improvisation. Joined by four instrumentalists with Latin names and five vocalists of international pedigree — I wish I could be more specific, but Pluhar’s poorly organized liner notes omit all biographies — the ensemble makes the kind of joyful noise that would please, not only the Lord, but all earthly beings with fire in their bellies and songs in their heart.

The most well known of Pluhar’s guest vocalists, the marvelous French countertenor Philippe Jaroussky, graces five of the CD’s 20 tracks with one of purest and most endearing countertenor voices on record. Unless you’re allergic to male vocalists who lack macho bravado, it’s hard not to fall in love with Jaroussky’s sweet and delightfully delicate rendition of “Duerme negrito” (Sleep, my little black baby). This Argentine folk song’s lyrics of suffering and sacrifice may pack a wallop, but Jaroussky brings out the love at the music’s core. 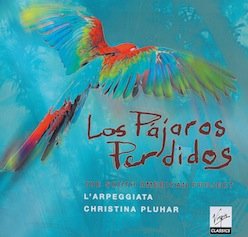 Is the unclassifiable voice of dancer/singer Vinenzo Capezzuto a high tenor, a countertenor, or a male soprano? Listen to our better quality mp3 of Luis Mariano Rivera’s “La cocoroba” (The swan), in an arrangement by theorbist Pluhar and multi-instrumentalist Quito Gato (cuatro, romantic guitar, baroque guitar), and judge for yourself.

Both these men may have their expressive limits — neither can get down nearly as much as the gutsy Luciana Mancini — but their understanding of idiomatic Latin inflections is supreme. Ideal in the more beguiling and plaintive numbers, they also blend extremely well in duet. Jaroussky’s pairing with soprano Raquel Andueza on “Como la cigarra” (Like the cicada) is as heavenly as Capezzuto’s with Mancini on “El curruchá.” Together with the low-voiced Lucilla Galeazzi, whose wide repertoire extends beyond opera to contemporary music and jazz, these superb singers create the vocal backbone upon which the 15 instrumentalists often play unhinged.

Those who have come to associate Latin baroque repertoire with the refined musicianship of Jordi Savall’s ensembles and the exquisitely poised soprano of the late Montserrat Figueras are in for something of a shock. Pluhar’s gang not only improvises equally well, but also lets loose in a manner all their own. On a host of tracks, not the least being “Pajarillo verde” (Little green bird), the percussionists take their cue from the vocalist’s bite — in this case, Mancini’s — and go to town. Theirs is some of the wildest and most exciting pounding that you will hear on any disc with a baroque pedigree.

Pluhar’s thesis, which forms the rationale for the project, is that South American plucked instruments differ little from their European Baroque equivalents, and are in fact direct descendants of instruments introduced by Spanish and Portuguese colonizers. To make her case, and perhaps eat it too, she offers a 9:11 instrumental arrangement of Antonio Soler’s “Fandango” that might seer the veneer off Elizabeth Blumenstock’s Guarneri. Some authenticists may cry foul, or proclaim it too jazzy for small town comfort, but I cry wow.

Get this disc. The next time some idiot proclaims that classical music lovers are a bunch of fuddy duddies, turn up the volume and watch their reaction. That is, if you’re not so carried away by the spirit that you don’t give a damn.