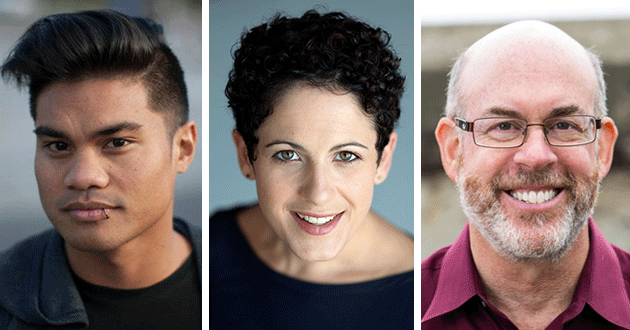 The guitar has plenty of gems in its 20th-century chamber repertoire, wonderful pieces that rarely receive a hearing. In its Monday night concert at San Francisco’s Dennis Gallagher Arts Pavilion, the Left Coast Chamber Ensemble went a long way toward shining a light on some of this music, in a program curated by, and around, their excellent guitarist Michael Goldberg. In a well-chosen program, the music mixed instruments animated by plucking — guitar, harp, and mandolin, with breath, voice, and flute in almost every possible combination.

This being the LCCE, there was a thoughtful dialogue between past and present, with two world premieres designed around the instrumentation of the older repertoire. The central ensemble of the night was voice, flute, guitar, and harp, beginning with the premiere of UC Davis-based composer Sam Nichols’ things that had no opposites.

The three bits of text for that piece come from contemporary fiction writer Tim Horvath, a friend of the composer, and they enigmatically skirt in and around the consciousness of characters speaking in a mode somewhere between prose and poetry. Nichols responded empathetically, with a composition in which instrumental lines and the voice overlap and coincide with each other like different aspects of a single mind. 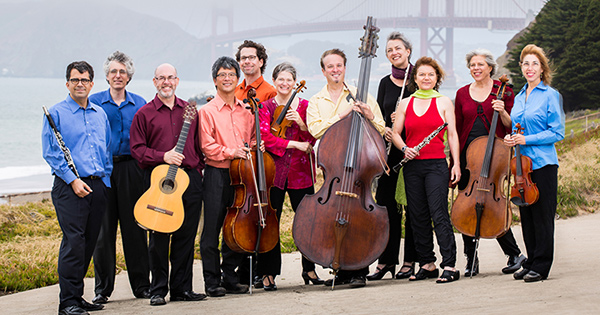 At times, the voice functioned much like another instrument; at others, the text took on greater urgency. The musicians built a subtle, dramatic arc that attained urgency as the piece approached its end. The music would be well worth repeating in future seasons.

The same quartet brought intimacy to John Anthony Lennon’s Ghostfires, a 1983 setting of three James Joyce poems across a flowing, single movement. The instrumentalists deftly shaped the harmonic tension that holds the work together, while Moss commanded the work’s expansive range and demanding, melismatic vocal writing. She traveled deep into the poems’ solitary, multihued emotional world, and made vivid the text’s imagery. Lennon is one of the finer American composers of his generation and it was a great pleasure to be treated to this work.

This ensemble finished the night with Stravinsky’s Four Songs. These are among the composer’s innumerable reworkings of earlier material, songs written from 1915-1919 and rearranged in the 1950s with the texts, on Russian folk tales, translated from French to Russian. The ensemble delivered a gutsy performance, with spirited singing and unified playing.

The other world premiere was Berkeley composer Amadeus Regucera’s Crave, for bass flute and harp. From its opening moments, this work conjures an invitingly strange, sometimes violent, occasionally delicate soundscape. Extended techniques and unpitched sounds were frequent — slapping the harp’s soundboard, tapping its strings with a woodblock while foil placed between the strings rattled, and percussive clicks and breaths from the flute. Both players added whispered text, some of it clear, some simply absorbed into the texture, while pitched passages often went to extremes of each instrument’s range. Regucera found the right proportion for all these elements to form a compelling, often riveting whole, while harpist Meredith Clark and flutist Stacey Pelinka delivered a fittingly intense performance.

Moss and Goldberg returned for three songs from Dominick Argento’s cycle Letters from Composers, in which the intimacy of voice and guitar lays bare both the wit and poignancy of Argento’s settings. Moss perfectly captured the tongue-in-cheek tone of the first song, a florid plea from J.S. Bach to the Leipzig town council to help him collect an overdue fee. Her flawless diction and clear singing were nicely matched by Goldberg’s propulsive work.

The program opened with Hans Werner Henze’s Carillon, Récitatif, Masque for guitar, and harp, with Travis Andrews joining on mandolin. Henze’s writing exploits the singular beauty of this combination, sometimes making it function like a collective instrument, at other times moving different players forward and back through the plucked texture, and mixing delicate effects and bolder flourishes. This trio didn’t cohere as well as some of the other groupings on the program, but Henzeʼs piece contained enough soulful beauty to carry the performance.