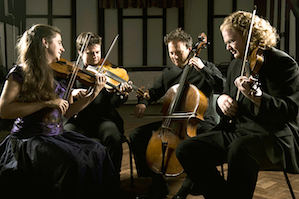 In the past it’s been the case that some chamber groups performing in the large confines of the UC Davis’ 1,800-seat Jackson Hall, at the Mondavi Center, have let the largess there get the better of them, sonically.

Despite the halls stellar acoustics, Mondavi is not always the best place to hear chamber music. Rather, the hall is well known as a brilliant and live platform for orchestral music.

But this proved no challenge to the members of the 14-year-old London Haydn quartet. These London-based musicians are expert Haydn interpreters, as their name suggests. But they are so much more.

On Friday evening, this quartet offered works by Haydn, Beethoven, and a Mozart. The latter was a quintet wherein the quartet performed with noted historical clarinet specialist Eric Hoeprich. That violinists Catherine Manson, Michael Gurevich, violist James Boyd, and cellist Pierre Doumenge were able to give a radiant and fresh performance of Haydn’s Quartet No. 36 in B-Flat Major, Op. 50, No. 1, is no surprise.

After all, this group — which performs on classical bows and gut strings — spent much of its 14 years concentrating on Haydn before expanding its repertoire outwards.

If any statement was made at this concert it was that the London-Haydn are expert interpreters of the First Viennese School repertoire. So much so that the Haydn was not the highlight of the evening.

Instead, the highlight was the work anchoring the second half of the concert: Mozart’s Quintet in A Major — a work written for the basset clarinet. That curious instrument, made of boxwood, looks like a regular clarinet with a meerschaum pipe-like extension appended to its bottom end. The extended instrument allows the instrument’s to range down a major third. And those few notes offered some delicious sound.

If any statement was made at this concert it was that the London-Haydn are expert interpreters of the First Viennese School repertoire. So much so that the Haydn was not the highlight of the evening.

Hoeprich, who grew up in Davis not far from the concert hall, but who now lives and performs in Europe, was more than willing to introduce the audience to the sonic charms of the basset clarinet. Mozart has written some delectable music here — the care taken with it, no doubt, an outgrowth of his affection for clarinetist friend and fellow freemason Anton Stadler.

In the quintet, Mozart uses the instrument as both a soprano and a bass instrument. Many delicious runs are written for the instrument and they appear in each of the piece’s four movements. Hoeprich looked at home on the instrument, sitting cross-legged. His sound was at once spotless and warm. In the Larghetto he savored the music as much as played it. The London-Haydn musicians offered a nuanced performance, in turn.

The Haydn Quartet No. 36 in B Major Op. 1 opened the concert and proved an exercise in clarity and musical variability. Doumenge’s cello offered a repeated bass line at the piece’s beginning which ushered in the many cadences and surprises that make Haydn’s music seem fresh, vertically buoyant and, at times, unpredictable.

The most interesting work of the evening was Beethoven’s String Quartet No. 3 in D Major 3. Whereas the Haydn was a game of clear storytelling, the Beethoven was more an expression of burnished weight intermingled with innovation. The quartet musicians shone in the Andante, which they performed without hurry, making the most of it. A willingness to convey a certain depth was the watchword here.

There had been some talk about the logic of offering this concert in the much smaller and less sonically interesting Vanderhoef Studio theatre next door. After all, the London-Haydn is not the most well known string quartet, and such groups do not easily fill the seats, as do orchestras.

But this ensemble made the risky move of presenting them in the big hall completely moot. If anything their music making served to shrink the hall down to chamber size — and at Mondavi’s Jackson Hall that’s saying a lot.