Valery Gergiev, one of the heavyweights on the international music scene, does have his detractors. Just within the context of his Sunday-Monday appearances in Davies Symphony Hall, leading the London Symphony Orchestra in two eventful concerts, there were numerous items possibly contradicting what may well be a general enthusiasm about the conductor. 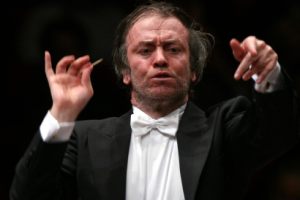 On Sunday, the orchestra performed Prokofiev’s First and Sixth Symphonies (Opp. 25 and 111), and the 1931 Piano Concerto No. 4, Op. 53, with Alexei Volodin as soloist. On Monday, they turned to Prokofiev’s Second and Seventh Symphonies (Opp. 40 and 131), and Beethoven’s Piano Concerto No. 5, Op. 73, with Volodin again at the piano. That’s a lot of Prokofiev — a composer often and well presented right here in the city by a former LSO principal conductor, one Michael Tilson Thomas. Just before the first concert, some of the LSO violinists were blowing kisses to the box occupied by San Francisco Symphony Concertmaster Alexander Barantchik, the LSO’s former “leader” (concertmaster).

The Sunday performance of Prokofiev’s Symphony No. 6 showed one of Gergiev’s flaws: a heavy, forceful approach, rushing the LSO’s excellent brass section, and not allowing the music to breathe. Unlike James Conlon’s Shostakovich in Davies Symphony Hall the day before, violent and elegant at the same time, the “lighter” Prokofiev barrelled along under the weight of Gergiev’s direction, who often seemed to be just beating time and bearing down.

In the encore, the “Guests’ March” from the ballet Romeo and Juliet, Gergiev again turned heavy, giving the music a martial and even scary edge. In the sledgehammer first movement of Prokofiev’s unpleasant Second Symphony, Gergiev exaggerated the already unmusical din, rather than bringing out the “graceful thing” the composer believed to be hiding underneath. A further annoyance in Gergiev’s conducting is those fluttering hands, a mannerism probably copied from Herbert von Karajan (who, nevertheless, was the superior musician).

Conductor and orchestra were truly generous at both concerts, especially on Sunday, with a stunning piano encore (in addition to the Romeo and Juliet excerpt mentioned above.) Immediately following Volodin’s impressive performance of the Concerto No. 4, a difficult and not entirely satisfactory work written for the left hand, Volodin launched into the “unplayable” final movement of Prokofiev’s Piano Sonata No. 7, Op. 83 (the “Stalingrad”), with such speed and abandon that it seemed impossible that he would keep up with the work’s ever-increasing difficulties. He did, ending the toccata in a firework of octaves, creating the high point of the two days.

When digging deeper into the Prokofiev oeuvre, it seems unnecessary to include the ever-popular/ever-present First Symphony (the “Classical”), but Gergiev breezed through it, strings hard at work, a fine balance and lively tempi maintained throughout.

The event-closing Seventh Symphony showed Gergiev and the orchestra at their most consistent. The conductor’s rush and impatience seemed suspended for most of this, Prokofiev’s last major work and one of his best. The trumpets-and-glockenspiel passage just before the final measures had the musical elegance not in evidence often enough from the Gergiev-directed LSO.

I find it difficult to like Gergiev, though, and the deeper source of my dislike got some fresh ink in last Sunday’s New York Times., the day of the LSO’s first concert here. The article deals with a controversial concert Gergiev gave at the end of the recent Russian-Georgian border war, and the conductor’s close ties to Vladimir Putin, the authoritarian former leader of Russia. What’s missing from the article is something I heard from Gergiev himself: He has remained a fan of Stalin, who “kept order and made Russia a great power.”