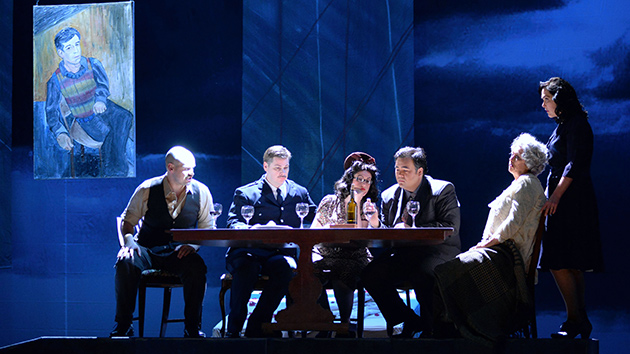 By focusing an unblinking eye on the emotionally raw, sexually explicit, crime-ridden underbelly of Parisian society, Émile Zola changed the way we look at drama. Zola’s novels (and later their theatrical adaptations) depicted characters whose lives were circumscribed by poverty, greed, addiction, and lust, all set against the gritty ugliness that was Paris in the mid-19th Century. One French critic labeled Zola’s writing, "la littérature putride!" Zola called it “a bleeding slice of life.”

Sadly, there is very little blood flowing through the veins of Long Beach Opera’s current production of Thérèse Raquin. Adapted from Zola’s 1867 novel about a loveless marriage that results in murder, the opera features a well-crafted but ultimately uninvolving score by Tobias Picker, set to an English libretto by Gene Scheer, which steers clear of any really provocative action. The ineffectual direction is by Ken Cazan. The new chamber-size orchestration of the opera is conducted by company Director Andreas Mitisek.

Ever since its founding in 1979, Long Beach Opera has operated on a shoestring, certainly compared to the vast budgets employed by institutions like Los Angeles Opera and San Francisco Opera, both of which have commissioned operas by Picker: Fantastic Mr. Fox and Dolores Claiborne.

LBO’s success has never been based on lavish productions. Inventiveness, the ability to spot rising talent, and a desire to push the repertory envelope have been its guiding principles. The company pioneered the idea of presenting opera in smaller, more intimate venues, as well as such untraditional settings as a bunker-like parking structure and an Olympic-size swimming pool.

In Thérèse Raquin, however, LBO’s lack of financial resources are glaringly apparent, from the nondescript single set design by Alan E. Muraoka to the grab bag costumes accumulated by Jacqueline Saint Anne. And then there is the Warner Grand Theater in San Pedro where the opera was presented on January 24 and will have its second (and final performance) Feb. 1 — a shabby former movie palace with little to recommend it as a musical venue.

In a preconcert talk, Picker expounded on the dysfunctional nature of Zola’s characters and how their emotionally claustrophobic existence leads to lust, murder, overwhelming guilt, and ultimately suicide. He pointed out the way his score reflects the character’s disintegration through the use of tonal structuring in Act 1, which gives way to jagged dissonance and atonality in Act 2.

Originally conceived for a wide-ranging mezzo, the role of Thérèse is sung by soprano Mary Ann Stewart. Stewart was more than capable of delivering Picker's score. But her performance lacked dimension and coloration as Thérèse vacillates between her overwhelming lust for a dashing painter, and the mind-altering guilt which stems from her infidelity and the murder of her husband.

Matthew DiBattista sang the role of Thérèse’s sickly husband, Camille. Pleasantly ineffectual in life, he proved more commanding when he returns as a ghost to haunt Thérèse and her murder-accomplice lover, Laurent (Ed Parks). Laurent is a man with a dashing exterior that overlays the brutal soul of a murderer. Unfortunately, Parks’ performance was incapable of capturing the powerful nature of this duality.

Following the Dallas Opera premiere of Thérèse Raquin in 1999, the French press (according to Picker) condemned the opera for “romanticizing” Zola by extracting many of the more graphic details in the novel.

Long Beach Opera’s production certainly can be accused of the same failing, which is strange for a company that traditionally makes a point of going where others fear to tread.