All hail Long Beach Opera, the intrepid little company that consistently goes where others fear to tread, from the obscure to the controversial.

Sunday at the Terrace Theater, LBO did it again in a big way, presenting the American premiere of Philip Glass’s fascinating deathbed portrait of Walt Disney, The Perfect American, just miles from the gateway to the Magic Kingdom.

The premiere also represents a coup for Los Angeles, the city where the opera certainly deserved to have its first American staging. Los Angeles Opera had the chance to present it, but chose to step away and play it safe. Playing it safe has never been the motto of Long Beach Opera. So when the opportunity arose, LBO’s artistic director/conductor, Andreas Mitisek volunteered and Glass agreed.

The Perfect American, which had its world premiere in Madrid at the Teatro Real in 2013, conducted by Dennis Russell Davies, is based on the fantastical novel, Der König von Amerika, by Peter Stephan Jungk. In the opera, the story unfolds as a three-month-long fever dream and deathwatch as the grand master of animation lies dying from lung cancer (at 65) in his hospital room. The libretto is by Rudolph Wurlitzer.

As the curtain rises on a stark, medicinal world of gleaming steel and glass (designed by Zane Philström), the studio magnate is drifting in and out of a state of disordered memories unsure whether he is living in the past or the present. One moment he’s remembering an idyllic childhood long past in the all-American Main Street town of Marceline, Missouri. The next he’s in the present facing the reality of his own mortality and the potential loss of the brand-named empire he’s created. 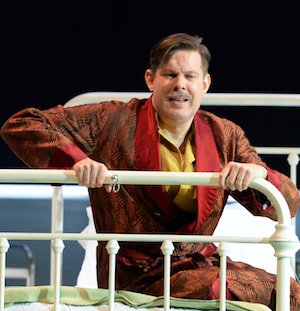 Performed brilliantly by baritone Justin Ryan, Disney is portrayed as man of conflicting natures and personas: Walt Disney the visionary storyteller/artist; the dictatorial studio mogul; the archconservative, anti-Communist racist; the loving husband and family man; and as the creator of a talking mouse he says is better known than Jesus. (A similar comment got John Lennon in hot water.)

As the opera evolves, Disney’s memories continue to ebb and flow between nostalgic memories of childhood, his characters Mickey Mouse and Donald Duck, and violent, paranoid outbursts of anger over the labor strike that shook his studio in 1941, an act of rebellion Walt Disney saw as the ultimate act of betrayal.

Throughout the opera, members of the Disney family come and go: Suzan Hanson as Walt’s wife, Lillian; his daughters Diane (Lara Ryan) and Sharon (Alexandra Martinez-Turano); and his brother/partner Roy (Zeffin Quinn Hollis, who for some inexplicable reason does not sport the Disney signature moustache).

They are portrayed in the most sympathetic manner without a hint of satire or disrespect. There’s also a cameo appearance by Andy Warhol (Kyle Erdos-Knapp) who proclaims his undying love for Disney and all things iconically American, from Campbell’s soup cans to Mickey Mouse.

The novel introduces the fictional character Wilhelm Dantine (Scott Ramsey), an Austrian immigrant artist who finds work as one of the thousands of animators painting the millions of cells that brought Snow White, Bambi and Fantasia to life. Initially a proud employee, his view of Disney turns to rancor as he sees his work going uncredited, and then to hatred when he’s fired for his efforts to unionize the studio. “Are we mice or men?” his protest placard reads.

As a compassionate counterpoint to the dying Disney, a young boy named Josh (Rana Ebrahimi), who also appears to be dying from cancer, occupies the next room. He idolizes “Uncle Walt” though he can’t understand how he found time to paint all those millions of cells himself. His day at Disneyland, he says, was the happiest of his life. The sincere relationship the two form gives the opera its heart, and more than one tear.

Because of copyright issues, productions of The Perfect American in Spain and later England, have been hampered by an inability to directly reference any of the iconic Disney images: no Mickey (beyond an x-ray skeleton of a mouse), no Magic Kingdom (though some early blueprints and ground plans skirt close to the reality).

The opera’s major exception is the animatronic figure of Abraham Lincoln, which became one of Walt Disney’s obsessions. A confrontation with the mechanical president provides a spectacular climax to the first act. Unfortunately, unlike former productions, which represented Lincoln in full dress and as a sung role, director Kevin Newbury and designers Sean Cawelti and Jack Pullman have chosen to portray Lincoln as a metallic skeletal puppet that resembles the Terminator with a beard. As a result, the climactic scene comes across as more horrific and grotesque than absurdly comedic.

Glass has probably done more to define modern music than any other composer of the late 20th century. His minimalist style of expression has become an integral part of our musical consciousness. In The Perfect American he relies on familiar formulas and compositional structures, while expanding the musical and instrumental spectrum to include a richer and deeper degree of emotionality, to the point that a “Happy Birthday” celebration sounds more like a Bach chorale. A large chorus appears in the background and comments on the action throughout.

At Sunday’s premiere, the first act, as conducted by Mitisek, felt listless, lacking the driving, pulsing intensity that Glass’s music requires. The second act, however, was performed at full strength, giving The Perfect American all the vitality and emotional resonance you could wish for. It’s just a shame that the production will only receive one more performance, 8 p.m. Saturday. If you can, don’t miss it.