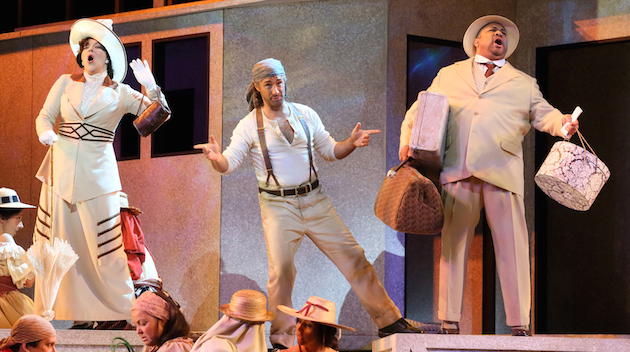 Like the beached riverboat that concludes Act 1, composer Daniel Catán’s Florencia en el Amazonas has taken on a lot of water since the premieres at the co-producing opera companies of Houston (1996), Los Angeles (1997), and Seattle (1998). In many ways a trailblazer, Florencia was the first Spanish-language opera to be commissioned by a major opera company north of the Rio Grande. While its historic importance is secure, the work’s continuing viability proved problematic last Saturday at its prodigal return to the Chandler Pavilion after a 17-year hiatus.

To begin, Florencia suffers by comparison with Catán’s last work, Il Postino, which premiered just four years ago at Los Angeles Opera to rave reviews, including one by me. Catán (who died of a heart attack in 2011) had by his late works become his own librettist, realizing that effective stagings often achieve more when they try for less, and that organic character development trumps contrived melodramatics. At the time of Florencia, Catán was already a fine craftsman composer, if derivative in style of early 20th century masters like Puccini, Debussy, and Ravel.

Predating the music, however, Catán’s challenge in Florencia stemmed from its checkered literary construction. The Mexican-born Catán wanted a saga to breathe in the air of Latin America. He sought Colombia’s Gabriel García Márquez as his librettist. But the novelist who made magical realism a catch-phrase demurred, recommending for the job his student, Marcela Fuentes-Berain. Her resulting libretto, based on borrowings from her mentor’s stories, may not be as incompetent an exercise as the sorcerer’s apprentice summoning brooms for water, but it contains too many characters with coincidental tie-ins to each other, glibly arranged as compare-and-contrast stages in the cycles of love. The result is an ambitious drama unduly dense and dimensional for an opera of only two short acts. It fails to erase perceptions of a kind of melodramatic telenovela set to music.

Despite the inherent weaknesses, there is much to savor in Florencia en el Amazonas, an important way station on the road to the composer’s mastery of the operatic art form. Its action unfolds on the Amazon steamboat El Dorado (designed by Robert Israel and resembling bargain-basement plywood) that is taking passengers from Leticia to Manaus (the real life inland city made rich by the rubber trade). S. Katy Tucker’s lighting projections for this revival, an innovation not around at the work’s premiere 17 years ago, enhance the atmospherics in the form of fanciful Amazon jungle landscapes, with frequent flamingos fluttering by in languid skies.

Returning original Director Francesca Zambello’s staging hardly has time to rise above efficient traffic copping in the busy action, but she deftly shifts scenes from top decks to side decks, with ensemble interactions in the open-to-view dining hall at the ship’s stern. Interaction of passengers with the Amazon River, represented by a troupe of five dancers, adds an element of the supernatural. An ensemble mélange of past regrets, present disillusionments, and future hopes, all stemming from love relationships, comes together at various intersections, notably a card game, a character’s fall into the Amazon, and his magical return later on. Much, perhaps too much, of the rest of the time is spent in private or coupled ruminations. 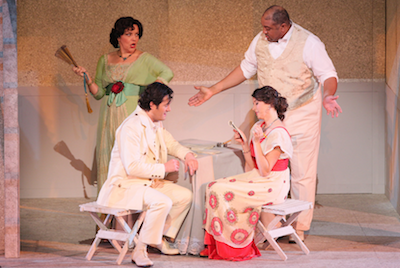 As the action unfolds, language authenticity was strengthened with five of the seven principal singers having Latin American origins.

The story opens with famous opera singer Florencia Grimaldi (soprano Verónica Villarroel) travelling incognito on the El Dorado to reopen the opera house. But a private drama traces an internal journey from delusion to self-knowledge. Her three arias are at the heart of the work and express her initial regrets on sacrificing early love Cristóbal for her career, her later determination to search for him at Manaus, and the desperate belief that Cristóbal’s continuing love still sustains her.

Once a frequent artist at L.A. Opera, Villarroel has not been in a production here for the last decade. On opening night, the years seemed to have taken a toll on her lustrous lyric voice. While she brought knowing vulnerability to Florencia’s quest, her large voice was uneven in quality, encountering problems of control and pitch. Bass-baritone David Pittsinger’s captain was steady at the helm until a crisis overcomes his character. Recovering later, he was ready on deck to console Florencia’s insecurities.

Rising coloratura soprano Lisette Oropesa as Rosalba, with ardent tenor Arturo Chacon-Cruz as Arcadio, provided the evening’s most satisfying vocal performances. Rosalba is a young writer who happens to be working on a biography of Florencia but does not know the subject of her work is a passenger. Arcadio is the dissatisfied shipmate with whom she falls in love after he rescues her lost notebook from the Amazon. Theirs was a lyrical, hopeful love, expressed in some of Catán’s most soaring passages. Florencia’s later council convinces Rosalba to go with love and abandon her writing career, the opposite of her own choice and a mutually exclusive option that grates on contemporary sensibilities for so recently conceived an opera. (Director Francesca Zambello was on hand at the origins of this story, reportedly flying in a helicopter deep into the author’s drug-cartel infested jungles to meet with Garcia Márquez and Fuentes-Berain. But having taken such risks, where, you  might wonder, was Zambello’s vaunted feminism when it was most needed to shape the story with a less hackneyed plot device?)

Solid performances by mezzo Nancy Fabiola Herrera and baritone Gordon Hawkins lent credibility to their middle-aged, oft-bickering couple, Paula and Álvaro, who hope to rekindle their flickering flame of love. Álvaro’s drowning in the Amazon is accomplished by Eric Sean Fogel’s a gracefully choreographed fall into the arms of the dancers, enacting the swells of the Amazon. As the work’s nod to magical realism, he is granted a second chance when the river yields him up to live again, not as imaginary phantom but as a real person. 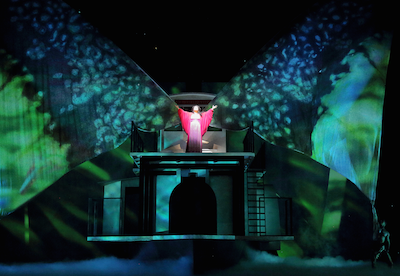 As if all this were not enough to work on, the action is overlaid with the pseudo-profundities of a kind of Old Man Amazon in the form of “the spirit of the river” named Ríolobo (athletic baritone José Carbo), who interprets events, intervenes, and provides a semi-magical gloss to the whole proceedings. He is regaled in fine costumes, as when he appears as a bird and other guises deftly designed by costumer Catherine Zuber. Ríolobo’s final revelation of a cholera epidemic on the mainland just as the El Dorado arrives at Manaus requires the passengers to remain indefinitely on board ship, adding further confusion to the ultimate meaning of their voyage and, for that matter, of this opera.

Catán’s musical idiom employs a post-Puccini palette of lush tonalities and catchy melodies, with orchestrations reminiscent of French Impressionism spiced with Latin American colorings like steel drums and the marimba. The lyrical score swoons and swells at every turn, with superabundant musical climaxes. Conductor Grant Gershon paced and prioritized the orchestral textures just about right, but balances could still sometimes favor instrumental sonorities over vocals, particularly in the case of Oropesa’s bright but comparatively small soprano.

Florencia en el Amazonas may have tried to be one too many things at once, but it was an important bridge for a composer still learning about dramatic pacing and the fine points of putting an arc into his musical architecture. If it can still encourage audiences, especially those who are Spanish-speaking, to attend and appreciate opera, it will remain of valuable service.