In times of crises, many of us turn to music for solace. But with the COVID-19 pandemic having made it largely impossible for audiences to attend live concerts, orchestras are having to rethink their very existence. For the Los Angeles Philharmonic, which was forced to cancel its Hollywood Bowl season (as well as a portion of its spring programming and, no doubt, the 2020–2021 season) at an estimated loss of $80 million, the organization has launched a robust online concert film series, SOUND/STAGE.

Making use of the Bowl’s vast stage, where musicians are able to perform together outside while socially distanced, each of the nine programs, which began Sept. 25, is conducted by Music Director Gustavo Dudamel. Organized around a single artist, ensemble, or theme explored through music, with supporting essays, artwork, playlists, and interviews part of the free package, the series got off to an auspicious start, with the first two concerts, “Love in the Time of COVID” and “Sálon Los Ángeles,” proving to be a study in contrasts: the former brooding, contemplative, and passion-driven; the latter a decidedly more upbeat expression of Mexican and American dance music.

Opening with drone shots of the City of Angels before zooming in on musicians — masked except for wind and horn players — tuning up, the initial concert featured three works: An emotionally searing rendition of the last of Peter Lieberson’s five Neruda Songs: “Amor mío, si muero y tú no mueras” (My love, if I die and you don’t”) is based on the poetry of the renowned Chilean scribe Pablo Neruda. Here, a haunting recitation by María Valverde, which was threaded between the pieces, accompanied expansive views of the empty boxes and benches at the Bowl and the stunning singing of mezzo-soprano J’Nai Bridges.

Lieberson (1946–2011) composed the song cycle, one that deals with the different faces of love, for his wife, Lorraine Hunt Lieberson, who died in 2006 at 52. Sung in Spanish with supertitles, it was co-commissioned by the Boston Symphony and the LA Phil, and premiered in 2005 by the latter. At the Bowl, this deeply sorrowful work, with the orchestra’s soulful accompaniment allowing for Bridges’s sonorous tone and poignancy to shine in a work that ultimately uplifts, featured a final note that was nothing less than a hushed call to love. 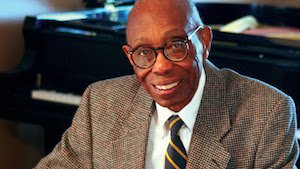 Lyric for Strings, by George Walker (1922–2018), who was the first African-American composer to win a Pulitzer Prize (for Lilacs in 1996), is perhaps his best known and most frequently performed work. This six-minute elegy, written in 1946 and dedicated to Walker’s grandmother, is both tender and lush, the harmonic fullness bringing to mind Samuel Barber’s Adagio for Strings, with the strings requisitely heartfelt.

Gustav Mahler’s overplayed but still resonant Adagietto from Symphony No. 5 completed the program. Also scored for strings — and harp, with the Phil’s new principal harpist, Emmanuel Ceysson, helping provide color — this 10-minute movement, which became anthemic during the height of the AIDS crisis, remains popular with choreographers, filmmakers, and audiences everywhere.

Written in 1902 as a love letter to his wife Alma, it was never intended to be a melancholic journey, but its popularity during times of darkness — and these days certainly qualify — has made it so. Happily, though, as the music moves through meditative grief and rises to an urgent yet pliant climax, the strings, plush and radiant sounding in Dudamel’s reading, offer a respite from the realities of COVID, the camera then capturing the maestro’s nodding approval as well as the staggering emptiness of the iconic amphitheater.

The Phil’s second episode of SOUND/STAGE is the polar opposite of its initial offering. Featuring the acclaimed music of two composers, Arturo Márquez and George Gershwin, who both adapted dance music for the symphonic concert hall, “Sálon Los Ángeles” is also the name of the oldest dance hall in Mexico City, with Dudamel paying tribute to its history in a joyous, highly rhythmic, and uplifting program.

Again opening on an overhead shot of the Bowl, two masked couples from the Grandeza Mexicana Folk Ballet are seen dancing in a kind of eerie silence, save for the sounds of their shoes, before Dudamel enters to give the downbeat for Márquez’s Danzón No. 1. The composer, who was born in 1950 in Sonora, Mexico, wrote nine danzóns, all of which were inspired by the golden age of danzón and are based on the music of the Veracruz region of his native land. A sequence of wind solos and groupings, the music highlighted players, including clarinetist Burt Hara and harpist Ceysson, whose glissandi added luster to this musical romp.

And with the dancers’ silhouetted images appearing intermittently on the backdrop of the shell, which was bathed in shades of coral and scarlet, the six-minute work, which accelerated in tempo with the addition of percussion, built, much like Ravel’s Boléro, to a festive finish.

Gershwin and Márquez, according to the Phil’s press notes, “while generations apart, set the orchestra in metaphorical motion, drawing inspiration from the early 20th-century partner dances of their respective nations.” Enter then, frequent LA Phil collaborator and L.A.-based pianist Jean-Yves Thibaudet, who gave an electrifying interpretation of Gershwin’s Rhapsody in Blue, the concert’s concluding number.

One of the most celebrated of American orchestral works, it premiered in 1924, and has been a staple in Thibaudet’s repertory for years. With Rhapsody, Gershwin, who died suddenly in 1937 at age 38, created a hybrid for piano and dance hall orchestra, giving the world a work of art that almost immediately transcended the concert hall to become a fixture in pop culture, the United Airlines commercial and opening credits of Woody Allen’s Manhattan being only a couple of the instances where it is heard.

But to see a master at work, in this case Thibaudet, on the Bowl stage where he’s performed numerous times — including with Dudamel — in this filmed performance, was an absolute delight. With no audience but plenty of captivating camera angles, this Rhapsody proved immensely satisfying. Dressed in a quasi-sequined jacket and attacking the keys as if possessed, Thibaudet is a technical wizard with a winning presence, his reverence for the music always on display. A big fan of jazz — he’s made albums devoted to Bill Evans and Duke Ellington — the Frenchman swung, notably in his solos, which were exhilarating, commanding, and, well, glitzy.

The orchestra also sounded superb, especially in climactic passages, with night shots of Los Angeles superimposed over the music before it came to a dazzling end. Raucous, rousing and a temporary remedy for this uncertain time, the Rhapsody, as delivered by these magnificent musicians, made one feel a bit more connected.

Both episodes were deftly directed by James Lees, with sound design by veteran Fred Vogler, lighting design by Robin Gray Academy Lighting Consultants, and edited at Parallax. As Dudamel so rightly noted, “Our world is forever changed, but our music has never felt more important.” Indeed.

Information about upcoming episodes is available at the SOUND/STAGE webpage.