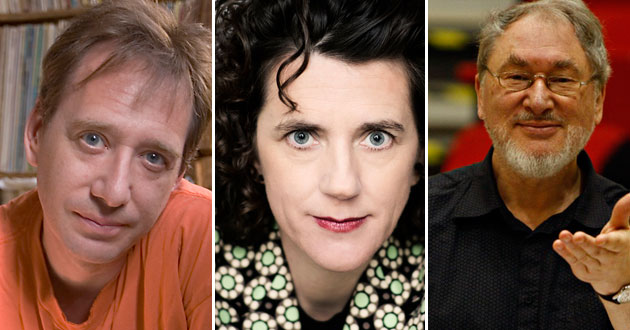 As a preamble to the Los Angeles Philharmonic’s wild Green Umbrella concert on Tuesday, Jan. 13, titled “Theater of the Outrageous,” conductor John Adams was asked by Veronica Krausas (the host of Up-beat Live) if this was a particularly difficult concert for the musicians.

Adams responded with a wry smile and a roll of the eyes that seemed to say, “Are you kidding?” Then he simply said, “No. These musicians are used to this.”

So an evening featuring a heady mélange of compositions by HK Gruber (Frankenstein!!), John Zorn (For Your Eyes Only) and Olga Neuwirth (Homage á Klaus Nomi that incorporated intricate structures, ever-altering time signatures, and a nursery chest of toy instruments including kazoos, slide flutes, and whirling plastic hoses, was, well, child’s play.

“The only thing they were a little uncomfortable with,” said Adams, “was having to sing.”

The concert was not officially part of the LA Phil’s ongoing “in/SIGHT” series, which combines musical performances with high-tech lighting designs and theatrical staging, but it certainly could have been. … the Disney Hall stage was festooned with an array of white beach balls of various sizes, as if Lawrence Welk’s bubble machine had somehow become frozen in time.

As conceived by the members of Chromatic (projection designer Adam Larsen, visual designer Ellen Lenbergs, stage director Roxie Perkins, and lighting designer Pablo Santiago), the Disney Hall stage was festooned with an array of white beach balls of various sizes, as if Lawrence Welk’s bubble machine had somehow become frozen in time. These white spheres, which ranged in size from small to gigantic proved to be both sculptural and an ideal surface onto which saturated light and video imagery could be projected. They could also float and be lit from within.

The 1970s and ‘80s were a time when the walls dividing the academically defined music world and the balls-out realm of popular music came a tumblin’ down. And each of the three pieces on the Green Umbrella concert can trace its conceptual DNA back to those heady days, a time when theater, music, and conceptual art strolled hand-in-hand.

HK Gruber (who was born in Vienna in 1943) co-created the MOB art and tone ART Ensemble with Kurt Schwertsik and Otto Zykan in 1968. He attracted international attention with his decidedly perverse piece Frankenstein!! in 1978. It calls for a chamber-size ensemble accompanied by a “chansonier” who performs a quirky nursery rhyme text in a speech-song style reminiscent of Schoenberg’s Pierrot Lunaire. Gruber performed the part himself for many years, including in a Green Umbrella concert in 1998.

In Gruber’s hands the piece takes on a darkly shaded quality of sinister dimension, like Joel Grey’s demonic master of ceremonies in “Cabaret.” The interpretation Tuesday (oddly appropriate to the hall) seemed determined to Disneyfy it, making it cuddly rather than sardonic.

Pieter Embrecht's approach transformed Gruber’s sprechstimme tales of monsters (Frankenstein), rodents (a nefarious rat) and superheroes (Superman, Batman and Robin) into song with real melodic tone progressions. And since Gruber’s score is decidedly tonal and playful on its own, the effect was more embracing and playful then leeringly disturbing. But within that more melodic framework, Embrecht offered an excellently varied interpretation.

Adams and the Phil musicians made the piece by turns shine, saunter, boogie-woogie, blast, and croon. There were times when the brass exploded, and others when they blended into a harmonic chorale. One moment Joanne Pearce Martin’s piano playing sounded like a Las Vegas piano bar, then it became a stride piano worthy of Fats Waller or a dissonant percussive instrument in the hands of Pierre Boulez. But amid the tumult there were also dulcet solos by bassoonist Sean Mouser, flutist Sarah Jackson, and first horn, Ethan Bearman. It was a blast.

Klaus Sperber, (a countertenor by training) who would become known as his leering, heavily made-up stage persona, Klaus Nomi, arrived in New York from his native Bavaria in 1972. As described in the program notes by John Henken, “Nomi appeared on the NYC scene suddenly, leaping from his spectacular debut at the New Wave Vaudeville show (where the astounded audience had to be told repeatedly that his voice was truly live) to spearhead a futurist movement of militantly fashionable avant-misfits.” Remember this is the era of such flamboyant performers as David Bowie, Devo, and Kraftwerk.

Olga Neuwirth was born in Austria four years before Nomi arrived in New York and he became one of her idol/influences. She began creating orchestrations of his electro-beat songs in 1998 and the performance of her Homage á Klaus Nomi Tuesday represented the completed project.

For the performance, the exceedingly adept countertenor Nathan Medley took on the role of Nomi, but avoided any direct comparison by appearing in a pair of stylish pajamas rather that the mask-like make up that was Nomi’s signature look.

The nine songs, each of which received its own song styling, choreography, and lighting effects, were as diverse as you can imagine, ranging from Nomi’s original material— “So Simple” and “Last Dance,” to “Dido’s Lament” from Henry Purcell’s opera Dido and Aeneas, to a rousing, climactic rendition of “Ding Dong the Witch is Dead” from The Wizard of Oz during which Medley deflated one of the beach balls as he proclaimed, “I’m melting!”

It was one of those one-time-only concerts that will take its place in the glorious scrapbook of the Los Angeles Philharmonic and the Green Umbrella.