L'elisir d'amore (The elixir of love) is not only one of most melodious and rhythmically exciting works in all opera, it also testifies to its composer's defiant humanity. Gaetano Donizetti endured many personal tragedies, including the loss of his wife in a cholera epidemic in 1837, the deaths of all three of his children shortly after their births, and a horrible, debilitating disease, which caused his mental deterioration and death in 1848. Yet his late works sustain the life-affirming comic and romantic delight expressed in Elixir, written in 1832, a time still innocent of those sorrows.
The spirit of "in spite of" also suffuses the Berkeley Opera's current production of the work at the Julia Morgan Theater. The hardworking cast and orchestra give their all and succeed, even in face of scarce resources. The story of wealthy, refined Adina (Angela Cadelago) and poor, rustic Nemorino (Andrew Truett) moving through obstacles and misunderstandings toward a happy ending is told with theatrical panache. The two principals, along with Sergeant Belcore (Torlef Borsting) and the quack "doctor" Dulcamara (Paul Cheak) are directed with imagination and economy by Robert Weinapple. 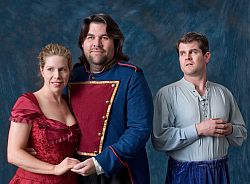 Making a silk (or, at least, silky) purse from a sow's ear, Weinapple doesn't cover up the obvious fact that he has a chorus that's too small even for one of the groups required by the opera. Instead, he makes a point of it by having the peasants change into uniforms on stage to become soldiers. Using the tiny stage and less-than-basic sets, the director surprises and delights the audience by having the desperately courting Nemorino pop up at the top of stairs by using a hidden ladder (or jumping really, really high).

Donato Cabrera conducts the 18-piece orchestra with passion and vigor, invoking the spirit of Rossini at times and leaving the chorus behind now and then, but frequently bringing it all together in a fine balance.
Adulation for Adina
There is one singer in the cast in a class by herself: Cadelago's Adina is consistently wonderful — right notes, right phrasing, bright sound, good diction, and excellent acting of a role that requires a hard-to-believe transformation from flirty-mean to selflessly loving. The soprano also has that ineffable quality that separates good from something better; she definitely has "it."

Her first aria (about the parallel Tristan and Isolde story) was a grand calling card on Sunday, making you sit up and take notice. Unaccountably, the conductor immediately launched into the music that follows, preventing applause. But the highlight of Cadelago’s performance came in her Act 2 duets with Dulcamara, which she elevated with effortless, bright, spot-on singing. 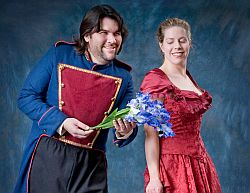 Truett, presenting a funny and believable Nemorino, was not in his best voice on Sunday, holding back and yet doing everything in his power to give as good a vocal performance as possible. His whirlwind acting made up for much of what was lacking in the voice. By the time "Una furtiva lagrima" (A furtive tear) came up, the audience was ready to trust Truett, and he came through well enough. To his credit, all the notes were there, the diction was fine, and, again, his stage work was exceptional.

This must be the flu season because Cheak had even less voice available. And yet he, too, more than stuck it out, served as an excellent partner, and substituted impressive acting for singing that would rise above adequate. Borsting seems to have the necessary vocal heft for the role of the blustery Belcore, and he sang well, except for taking some not particularly taxing passages in a head voice approaching falsetto — a strange thing from an otherwise powerful baritone.