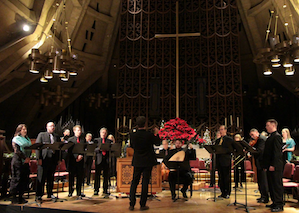 In its new concert season, Magnificat examines musical encounters and exchanges that influenced the music of the 17th century, a period marked by the invention of opera, oratorio, and virtuoso instrumental music, in which this Bay Area baroque ensemble specializes.

Both composers worked at the Basilica San Marco in Venice, as organist and maestro di capella (music director) respectively, but since Gabrieli died in 1612 and Monteverdi (1567-1643) did not even move to Venice until he was hired in 1613, it is highly unlikely that the two composers actually ever met in person, although they must have met in spirit — despite their different styles and aesthetics.

Last weekend, it was the Christmas spirit that brought them and their music together in A Venetian Christmas Mass, a re-enactment of the sonic events of a 17th-century Christmas day Mass, following the liturgical sequence and complete with chant and the recitation of prayers and Gospel readings.

Magnificat’s Artistic Director Warren Stewart drew the music for the re-creation of this Christmas mass from several different collections such as Gabrieli’s second book of Symphoniae Sacrae (Sacred Symphonies) and Monteverdi’s Selva morale e spirituale (Moral and Spiritual Forest, 1641), and the Vespro Della Beata Vergine (Vespers of the Blessed Virgin) from 1610.

They were both very effective in writing music that makes a huge impact ... best summed up in a resounding ‘Wow!’ from an audience member behind me, when the resplendent reverberation of the majestic closing chord had only barely dissipated.

In a recent radio interview on KALW’s Open Air, Stewart mentioned that both Gabrieli and Monteverdi wrote “music for grand and festive occasions such as Christmas, Easter, or major civic celebrations. And they were both very effective in writing music that makes a huge impact.”

That huge impact was best summed up in a resounding ‘Wow!’ from an audience member behind me, at the end of the Sunday concert at St. Mark’s Lutheran Church, when the resplendent reverberation of the majestic closing chord of Gabrieli’s Omnes Gentes, plaudite minibus (All nations, clap your hands) had only barely dissipated.

The Venetian Christmas Mass unexpectedly stirred deep memories in my no-longer-Roman-Catholic soul, especially in the way in which bass and “celebrant” Hugh Davies sang/recited the second Gospel reading and the “Prefatio,” gently accompanied by the background noise of sniffs and coughs and creaking pews; with people moving their bodies and shuffling their feet.

It was a complete soundscape of the neighborhood church of my youth, in which my father conducted the choir for more than forty years. The only difference was that no priest in my memory ever sang as beautifully as Hugh Davies. And I am sure that my father would have loved to have the assistance of vocalists like Magnificat’s fine octet.

In addition to a powerful intellectual time machine, A Venetian Christmas Mass was also an overwhelming concert experience, due to the vocal and instrumental splendor of Magnificat as an ensemble.

Of the many magnificent vocal moments, I especially liked the way in which the timbres of sopranos Clara Rottsolk and Jennifer Paulino beautifully blended and complemented each other in the rising melodic gestures of “Et ascendit in caelum” (And He ascended into heaven), right after the male singers dramatically explored the despondency of the forever descending melody of “Crucifixus etiam pro nobis” (He was also crucified for us), in the Credo setting by Monteverdi.

Together with the continuo players John Dornenburg, John Lenti, and Katherine Heater (violone, theorbo, organ), The Whole Noyse, expanded for the occasion with two additional sackbuts (early trombones) played virtuosic instrumental interludes during the Offertory and Communion and provided an impressive sonorous foundation for the monumental architecture of the music of Gabrieli and Monteverdi.