Claudio Monteverdi, already famous as a composer of secular music in the late 16th century, published a Mass and a vesper service in 1610. This year is the occasion for many celebrations of the 400th anniversary of that event. On Sunday afternoon, in Grace Cathedral, Magnificat celebrated. Fielding a team of 10 extraordinary singers, Artistic Director Warren Stewart conducted a splendid performance of the 1610 Vespers, accompanied by four string players, organ and theorbo continuo, and six players of a variety of Renaissance winds: The Whole Noise and guests. 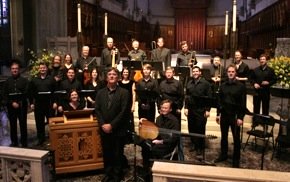 Five psalms were set for chorus, including a lovely double-chorus Nisi Domini (Unless the Lord build the house). Every psalm was bookended by antiphons sung unison by the men, led by celebrant Hugh Davies. Other numbers were for smaller ensembles and soloists.

Sopranos Jennifer Ellis Kampani and Jennifer Paulino sang the parts written for castratos, making nice work of the florid Pulchra es (You are beautiful) from the “Song of Solomon.” Also from the “Song of Solomon” is Nigra sum (I am a black but beautiful daughter), which Monteverdi set for tenor in spite of the text — perhaps preferring the heft of a tenor voice to a soprano sound, or perhaps writing for a particularly gifted tenor. The gifted Paul Elliott invested it with beautiful feeling. He has a masterful way with florid outbursts that are not simply vocal display but have expressive purpose.

Elliott also sang Audi cœlum (Hear, O Heaven), which features a second tenor backstage, echoing the end of each verse. And even our own Bay Area Magnificat had not escaped the scourge of Iceland’s volcanic ash, which kept an Italian tenor in Milan. He was replaced by San Franciscan Brian Thorsett, who learned on short notice all the necessary choral and small ensemble parts, including the Audi cœlum echoes.

Versatility in the Voices

Monteverdi must have written for several excellent tenors. Christopher LeCluyse stayed high in his range for most of the concert, singing alto with a pure, powerful sound rarely found in modern female altos in this kind of repertoire. He joined Elliott and Thorsett in the brilliant tenor section Duo seraphim "Two seraphim" joined by a third). The three tenors, in similar ranges but with very different sounds, echoed each other in a wonderful musical consensus. Tenor Daniel Hutchings, also versatile, sang alto parts when needed. The chorus was grounded in a fine bass/baritone section: Peter Becker’s strong low bass on the bottom, plus Hugh Davies, Robert Stafford, and Jeffrey Fields.

Every Vespers service draws to a close with Mary’s response to the Annunciation: her Magnificat. Monteverdi pulled out all the stops in his 1610 Magnificat, varying the distribution of voices and instruments with each section: sopranos solo and in duet, alto and tenor solos, basses in and out, two violins here, two cornettos there, here a trombone, there a dulcian, amazing low notes from organ and theorbo, and finally ... all together. Our namesake Magnificat gave the original Magnificat a superb performance, creating something like the last cascade of fireworks on the Fourth of July.

After some more verse and response, a final Sancta Maria (Holy Mary) chanted by the two sopranos in unison over instrumental variations, the service — and the concert — came to its conclusion. The large audience, at last allowed to applaud, did so at length.