Pianist Leon Fleisher returned to his native San Francisco for a celebration of his 80th year, with both hands working beautifully after a nearly 40-year layoff, due to his right hand, which partly died on him. The cause was a focal dystopia that brought on the dysfunction of two of his fingers. With guest conductor Marek Janowski on the podium for last week's San Francisco Symphony program, Fleisher proved that he's fully recovered. His Saturday evening performance at Davies Symphony Hall showed the piano world just how fully Beethoven's "Emperor" Concerto maintains its crown. 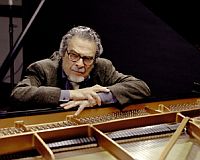 Standard German Romantics formed Janowski's splendid, if conservative, program. He opened with Beethoven's dramatic Overture for Goethe's "Egmont," Op. 84, followed by Beethoven's Fifth Piano Concerto in E-flat Major, Op. 73. We then had intermission before a particularly fine performance of Schumann's bravura Symphony No. 2 in C Major, Op. 61. All three works were so well done that they sounded fully refreshed.

Fleisher's comeback is especially impressive, not least for his age but also for his medical miracle. After all, a number of major pianists have faced a depleted career due to carpal tunnel syndrome, Gary Graffman, Byron Janis, and Michele Beroff being among them. Regaining the use of any hand after that condition is virtually unheard of. Yet Fleisher had the advantage of living and teaching in Baltimore, with Johns Hopkins University's best at his beck and call. Modern medical techniques did the rest.

Fleisher spent 10 years studying with Arthur Schnabel, the 20th century's high priest of Beethoven's piano repertoire. As such, Fleisher has long been recognized as a leader in the field, producing for me what were the definitive Beethoven and Brahms recordings.
Packed With Small Miracles
You could hear as much in Saturday's authoritative performance. The attention to detail and Fleisher's steadfast devotion to even the smallest matters of dynamics, phrasing, and tempos were wonders to behold. He simply refused to exaggerate, during a scholarly approach packed with dignity and a keen sense of architecture. He mastered the most delicate of passages with equal authority during the thunderous ones. It was an example of grandeur in Beethoven rare in all its virtues. 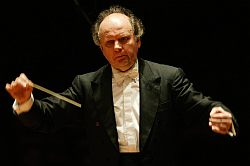 Janowski's Beethoven was on virtually the same level. The exaltation was present but was never allowed to gallop out of control. In some respects the slow movement turned out to contain the outstanding moments of the concerto, approaching something akin to a religious experience.

Both the sustained loveliness of the strings and Fleisher's ability to make the piano follow suit provoked an awed silence throughout the hall. It was as if the music were saying, "Now, this is important. Pay attention."

Beethoven's fiercely dramatic "Egmont" Overture needs no such request. Oddly enough, it's been reported that Goethe disapproved of Beethoven's F-minor fury — the key of his "Appassionata" Sonata. But could the purely classical styles of Haydn or Mozart have dealt with this throat-grabber of a play, dealing as it does with revolution against tyranny?

Clearly this was a subject close to Beethoven's heart and he lavished his full genius on it. The longish coda, sometimes referred to as his "Victory Symphony," reaches a heat of intensity rare in any of his other music. (Well, maybe the finale of the Fifth Symphony. Maybe!)

Janowski had the orchestra in perfect balance, clean in texture while bursting at the seams with sonic power. Never did it slip into a mere din, but instead maintained its dignity in full splendor.
Strings at Cruise Speed
Yet the cream of Janowski's musicianship showed itself via the virtuoso demands of Schumann's 40-minute Symphony. First, it's sheer hell to play, particularly for the strings, who rarely get to rest. The first, second, and fourth movements are virtually perpetual motions at fast tempos. I'm always amazed the violinists' arms don't cramp up on them.

The wonder is just how well Janowski got the orchestra to play the piece with no more show of strain or technical difficulty than if they were playing a chorale in whole notes. For while this Symphony is tremendously difficult, when an orchestra possesses technical virtuosity enough to deal with it, they tend to revel in its challenge. Our local band did that, and in spades.

So did Janowski, who proved excellent in tempo selection and polished in balances, and who generally mounted all the glories of this exuberant composition with its various contrapuntal lines. Schumann's finale comes close to matching Mozart's "Jupiter" Symphony finale; it's an odd thing that Schumann has rarely been credited with being the master of fugal writing that he was.

Every little detail of melody shone through the sometimes thick writing with lightness and glamour. Yet I heard not one harsh scrap of sound through these demanding passages.

That granted as being superb, it was the slow movement that nearly swooned in adoration of one of the great romantic sections in all the 19th-century symphonic literature. (CBS used to employ it for its summer Sunday afternoon radio program when the New York Philharmonic was off air.) The smooth, expressive playing of the orchestra in quiet dynamic levels displayed a poise of sustained beauty rare to any organization.

Score it as a very classy concert, with a high level of getting all things musically right.