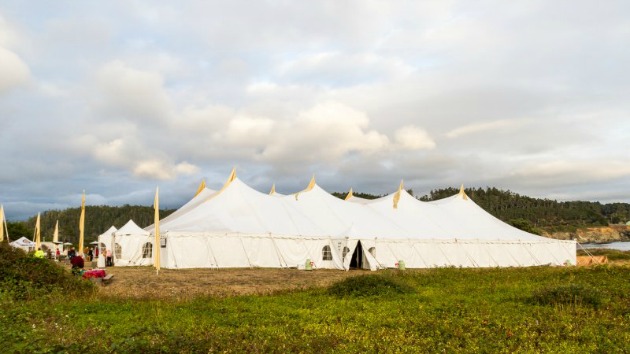 The performance on the evening of my arrival at the Mendocino Music Festival last Wednesday might have effectively signaled both the age and the achievement of the annual event, set a few hundred yards from the Pacific shore, a few hours north of San Francisco.

Under the spacious Tent Concert Hall, the only violin concerto by Ludwig van Beethoven, this year’s featured composer, was fronted by Sonoma-bred soloist David McCarroll, who, like the Festival itself, is 30 years old. McCarroll displayed an ingenious range of dynamics, masterful lyricism, and faultless technique. And the Festival Orchestra, under the baton of Festival co-founder and artistic director Allan Pollack, was even better than I’ve heard it in my previous visits, well-balanced in a compellingly paced performance. These qualities continued to manifest in the composer’s Eroica Symphony, on the program’s second part.

Susan Waterfall — Festival co-founder with Pollack, her husband, and the late Walter Green — presented the last of three illuminating commentaries on the life of Beethoven, on Thursday afternoon at the woodsy, more intimate Preston Hall, a few blocks down Main Street. Her topics included the coalescence of the composer’s “late style”, the inspiration of his unnamed “Immortal Beloved”, and the influence of this period of his output on later works by Schumann and Schubert.

The all-Beethoven program proceeded to showcase these influences in a performance by tenor Brian Thorsett and pianist Miles Graber of the pioneering song cycle An die ferne Geliebte (To the distant beloved). This was a sympathetic and ingenuous reading, with Thorsett credibly inhabiting the persona of the smitten youth. Waterfall’s forthright rendering of the Piano Sonata No. 30 in E Major preceded intermission, and the Peregrine Quartet’s performance of the String Quartet in A Minor followed. The quartet was most impressive in the Andante movement, again foretelling the classically-influenced Romantics.

Another performing Pollack family member, pianist Julian, regaled the Tent Thursday evening in a program that opened with ROSA, an a cappella group of women from five Eastern European countries, focusing on the music of Serbia. Fans of the Bay Area’s own Kitka Women’s Vocal Ensemble, heard familiar, thrilling features such as diaphonic singing (parallel harmonies, in this case of a minor or major second with one voice maintaining a drone), ornamental glottal stops, glides, and quavers, and complex time signatures. But old fans and neophytes alike were thrilled by the power and clarity of the vocalization. 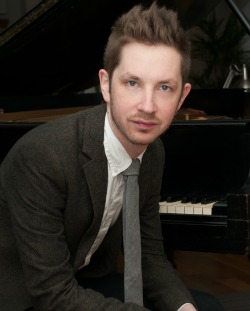 After the ladies left the stage, Julian Pollack and the Sveti trio — also featuring Serbian-born drummer Marko Djordjevic and Illinois-raised electric bassist Evan Marien — showcased powerful, imaginative music that seemed to pilot jazz toward both world music and post-post-bop visualization and experimentation. The ensemble evoked pleasant memories of the heyday of ECM Records’ jazz stars (such as Chick Corea, Eberhard Weber, and Jack DeJohnette), but all three players shone in their own light. Marien deconstructed harmonies delightfully in his solos, Djordjevic (also the primary songwriter) was strong and exciting, and Pollack’s classical training was put to deft, imaginative, and sometimes eccentric use. A return to the stage of the ROSA women worked to ground-breaking and gratifying effect.

Youth was in evidence again on Friday afternoon at Preston, where 12 string players between the ages of 18 and 26, on scholarship under the aegis of the Festival’s Emerging Artists, formed six chamber ensembles with rotating members to perform an impressively diverse program of Mozart, Mendelssohn, Beethoven, Elgar, Shostakovich, and Brahms. At times superior to their elder colleagues heard earlier, these players displayed accurate intonation, mature phrasing, and refreshing vigor, even on the tortuous Russian quartet.

The Friday evening slot in the Tent had been set for Stanley Dural, Jr., aka Buckwheat Zydeco, a piano accordionist and veteran of the Louisiana-based song-and-dance form on which he based his stage name. But when the well-known Buckwheat was sidelined by cancer treatment, the gig was passed to fellow Louisanan sexagenarian Michael Doucet, fiddler, button accordionist, and founder of the group Beausoleil.

Doucet and his group — brother David on guitar, Mitchell Reed on bass and fiddle, Tommy Alesi on drums, and Billy Ware on percussion — assembled a set list taking its state’s music across time and ethnicities: Cajun, developed in the early 20th century by white descendants of French Canadian immigrants; Creole, with origins among black agricultural workers; Swamp Pop, which enjoyed a spicy and mostly white give-and-take with early rock ‘n’ roll; and Zydeco, a localized and originally black outgrowth of rhythm-and-blues. Beausoleil has long proven its ability to deliver the Louisiana sound in user-friendly form, rather than sticking to the rawer roots, but on this evening there were moments of twin-fiddle delight and decorative accordion doodling. The packed audience greeted the offerings with claps and yelps, some actually dancing in the aisles. “This doesn’t look like Louisiana,” said group leader Doucet, “but it’s one of the most beautiful places in the world.” True, that. “I sure hope we come back,” he declared, before a couple of encores.

A quieter folk form was ushered in at Preston on Saturday, the final day of the two-week Festival. Executive Director Barbara Faulkner introduced Mendocino-based singer-singwriter, Gwyneth Moreland, who revealed she'd been Faulkner's piano student. Accompanied by bass player and former Van Morrison collaborator David Hayes, Moreland showcased mostly original songs, many of them co-written with her husband Skyler Hinkle and some of them available on recently released CDs, one of which placed earlier this year on the Folk DJ Charts.

As a singer, Moreland deploys an utterly charming, girlish voice, at the same time flexible and dramatically kinetic. Her sound fits her tales of travel and domestic life, as well as the occasional eccentric but poetic outing. Co-sponsored by a local rock station, Moreland dropped numerous regional references into her lyrics, to summer fog, to stormy weather in other seasons, and to the “Dirty Triangle” (three bars within stumbling distance of each other, in nearby Ft. Bragg). For her second set, the singer brought up her brother Morgan Daniel, who plays guitar, dobro, and banjo and fashioned two of his sister’s guitars, and drummer Gabe Yanez, who helped illustrate Moreland’s potential as a country-and-western vocalist. In fact, I found myself hoping that Moreland will apply her stand-out talent and appeal to material of wider harmonic range. 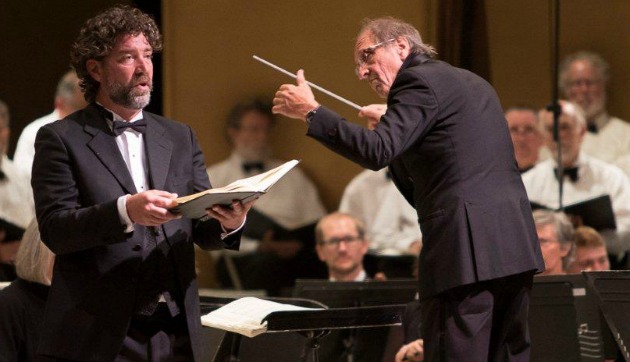 An usher on the evening of the last day remarked, “This is the most I’ve seen at anything.” She was referring to the crowd packing the Tent for the performance of Bach’s Mass in B Minor, but perhaps also to the formally garbed Festival Orchestra and Chorus, which seemed to occupy every square foot of the stage. From the conductor’s podium, Allan Pollack displayed his alluring physically and psychologically active and engaged approach to leading the aggregation.

Despite the size of the combined ensembles, the orchestra was of course pared down to Baroque scale, and the vocal soloists, missing the designated second soprano who was involved with a family emergency, numbered four instead of five: tenor Brian Thorsett, bass Paul Thompson, first soprano Aurélie Veruni, and alto Betany Coffland, who also took on the second soprano part. Most of the unamplified solo voices seemed rather daunted by the expansive venue, though Veruni proved particularly vibrant and colorful. The continuo players supporting the vocal soloists sounded true and good, and the massed voices, as prepared by chorus master and pianist Carolyn Steinbuck, were forceful and well-balanced. Their ultimate invocation of “Dona nobis pacem” — Grant us peace — seemed a vital blessing after a week in which the bucolic seaside setting and the manifest joy of sharing music couldn’t quite take away the political sins of the wider world.

“This really feels almost as dangerous as warfare,” Allan Pollack remarked, reflecting on the Festival’s three decades, during a sun-kissed chat outside Preston Hall. “We’ve had some battles, but we’ve aspired to connect with our community and make art with people here and for people here. People for the past few weeks have been fluffing me up, saying, ‘We love what you’re doing.’ And you just won’t get that in New York City.”