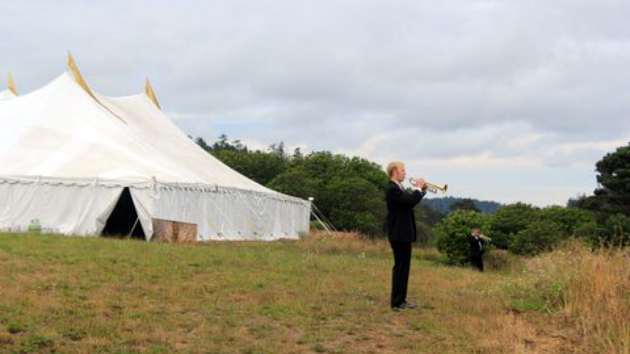 The Mendocino Music Festival, currently in its 29th season, needs no Pied Piper. Each July, crowds of lovers of classical, chamber, opera, jazz, and world music flock to the big white tent on the headlands above Mendocino Bay, arrayed in their own motley of flowing fanciful dresses, jeans, and varicolored shirts, ready to listen, clap, cheer, and chat. But this year, the festival had a Piper, in the form of Scott Macomber, on busman’s holiday from the faculty of the San Francisco Conservatory of Music to play principal trumpet in the Festival Orchestra.

Prior to last Saturday’s opening night concert by the orchestra, Macomber stood in a field outside the Tent Concert Hall, trumpeting to the Pacific. The sound also drifted backwards, over the galleries and shops of the pretty village, which had set up window displays on musical themes and had invited individual members of the orchestra in to greet and inform visitors.

When Macomber and his fellow performers, the only people in formal dress, had assembled on stage inside the tent, they offered an apt ingress to festival fun in the form of Shostavovich’s Jazz Suite No. 2, which started the orchestra off on a wacky March, something like a spritz of late Fourth of July intoxication. Conductor and festival co-founder Allan Pollack kept his sections nicely balanced and yet affectingly youthful through this and the sweet but strange movement marked Waltz 2, which pleased the packed audience so much that they wouldn’t postpone their applause till the conclusion of the equally fascinating last movement, Dance 1. Pollack paces his players handsomely, maintaining their momentum and producing an overall result perhaps even more confident and artful than they demonstrated in 2014. 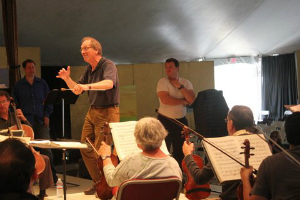 There was less chance for the orchestra to display their dynamics in the Prokofiev Symphony No. 7 and Tchaikovsky Concerto for Violin, both of which rounded out the opening program, but Pollack deployed his palette well, evoking the scent of a summer romance in the former and handily supporting soloist Livia Sohn in the latter. The violinist was neither as broad nor as forthright in her attack as some familiar with the Tchaikovsky might wish, and seemed possibly annoyed by occasional acoustic infestation from an amplified event external to the festival.

While that first Saturday belonged to the Russian composers, the tent on Sunday was occupied by a double-dose of French-Canadian-based music from the eastern provinces of that country. The two acts had in common a trio configuration, use of fiddle, guitar, bouzouki, and accordion, and a form of percussive step-dancing performed mostly while seated. But there were distinct differences in approach to the repertoire, part traditional and part original.

The degree to which folk groups from many regions are intent on straying from their roots and currying contemporary favor is often directly proportional to the frequency with which they interpolate cutesy flat-seven chords in their progressions, pretty much non-existent in traditional tunes. The flat-sevens were much more in evidence with the evening group, Vishtèn (from Prince Edward Island and the Magdalen Islands) than with the afternoon’s De Temps Antan (from Quebec). In similar fashion, Vishtèn seemed more insistent on angular syncopations and De Temps Antan more content to stick to traditional dance rhythms. Both groups sang prettily in French, the LeBlanc twins from Vishtèn also employed keyboard and end-blown flute and pennywhistle. I’ve always clung to the roots, but Sunday’s audiences, though smaller than for some other acts, embraced the imported sounds warmly.

The Calder Quartet, on Monday afternoon, made a case for the draw of chamber music, filling up the majority of the tent seats for a fascinating program that began with a setting of Sabina, by 36-year-old composer Andrew Norman, like them a resident of Southern California.  Norman’s regard of architecture as inspiration was evident in this marvelous evocation of a Roman basilica, sometimes through use of scratch tones and requiring of the quartet a seamless, almost telepathic coordination of color, to which the Calder is certainly suited. Audible windswept banners atop the tent added quirkily to the mix. 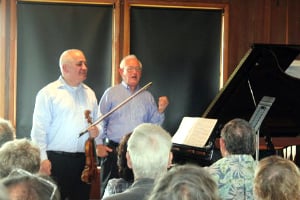 Violinist Andrew Bulbrook introduced Britten’s String Quartet No. 2 by noting the similarity of the festival’s setting to that of the composer’s annual festival at Aldeburgh, on the coast of Suffolk. The Calder proceeded with this piece to evoke slightly contentious but playful village conversations and dances, moving on in the final Chacony movement to one of the most luminescent, transcendent expressions in a chamber context that this reviewer has ever experienced. The dazzling performances of the two modern pieces were a hard act to follow for the tamer Beethoven String Quartet No. 14, after intermission, but the Calder exercised admirable athleticism in the Allegro, charm in the Adagio, gracefulness in the Scherzando, and sonority and high spirits in the Finale, earning a prolonged standing ovation.

A larger, differently-garbed group of young men, the California Honeydrops, filled the same stage Monday evening. A much larger and age-diverse crowd completely filled the tent’s seats for a joyous bouquet of Americana varietals, particularly soul, rhythm-and-blues, and riotous New Orleans party music. Led by clarion vocalist, trumpeter, and guitarist Lech Wierzynkski, the Honeydrops blew away preconceptions and hangups by changing up and sharing instrumentation, which also included piano, a keyboard with organ and celeste effects, drums, bass, tenor sax, clarinet, conga, and even washboard and cowbell, both of which enjoyed solo sessions. Like the two Canadian groups, these Bay Area-based entertainers invited the audience to dance, and unlike any group I’ve ever seen under the tent, they at one point took up portable instruments (including melodeon) and marched off stage and through the throng in Mardi Gras, second-line fashion, to the delight of all.

Mendocino remains a worthwhile destination for music lovers despite the long drive, which is itself beautiful, even along the further-from-the-coast but much quicker US 101 to California 20 route. Picturesque and friendly accommodations support the Festival with sponsorships, complementary rooms for musicians, and discount tickets for visitors. And the Festival itself, in addition to expanding its bookings, has improved accessibility and instituted a music education program in the Mendocino Community Center, with opera director and singer Eugene Brancoveanu ducking out of rehearsals to go hang with the kids. To paraphrase presidential candidate Hilary Clinton, it takes a village to make music into this kind of magic.