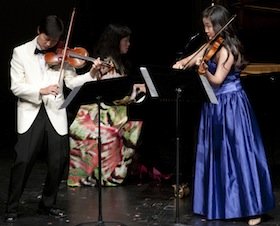 [email protected] celebrated the final day of its 10th anniversary season on Saturday by packing in an unusually heavy public schedule of three full-length concerts over a period of eight hours, all of them at the Menlo-Atherton Center for the Performing Arts. This sequence was followed by a concluding celebratory dinner. Though I did not attend the dinner, I did get to all three of the day’s concerts.

The theme of the evening headliner event, eighth in the festival’s main concert program sequence, was “Delighted: Music for the Fun of It.” Menlo is a fairly serious place, and this concert suggested that even the festival’s idea of fun music runs to the serious.

Such tastes were most obvious in the concluding item, Ernest Chausson’s Concert in D for Violin, Piano, and String Quartet, Op. 21. This epic work outweighs even the composer’s contemporaneous symphony in size and gravitas. It’s dominated by a stunningly tragic slow movement and offers a gently waving Sicilienne in place of a scherzo. Even the animated finale is hardly as light or cheerful as other composers have written in similar contexts.

What’s unusual about this hidden masterpiece (why don’t we hear it more often?) is its instrumentation. Chausson differentiates the solo violin from the string quartet by having the quartet play together as a unit more often than not. Essentially, then, there are three voices. Ani Kavafian gave the solo violin part a warmly lyrical turn. The quartet (Sean Lee and Kristin Lee, violins; Arnaud Sussmann, viola; Dmitri Atapine, cello) rolled rich harmonies through the piece, and its members stepped up for their occasional solo parts with appropriate boldness. Pianist Inon Barnatan was the real driving force behind this concerto. His choppy, nearly unceasing playing provided the energetic base on which all the string players floated.

The Suite for Two Violins and Piano, Op. 71, by Moritz Moszkowski, was equally surprising. Moszkowski defies his reputation as a lightweight salon composer with a substantive four-movement work, notable for attractive melodies and delicate interweaving. The two Lees from the Chausson’s quartet were the violinists; their styles and instrumental tones were overly similar, though this didn’t matter much in this work, built as it is mostly on harmonic pairing and canonic repetition. Wu Han as pianist made an equal partner with the Lees in treating Moszkowski with respect. Overall the music sounded less like a trio for piano and strings, though that’s what it technically is, than like a richer version of a sonata for violin and piano. More composers should try writing for this combination.

This concert suggested that even the festival’s idea of fun music runs to the serious.

The same two pianists, Barnatan at treble and Wu Han at bass, sat down at one keyboard to play Mendelssohn’s four-hand Allegro brilliant, Op. 92. Despite its title, this is not a flashy virtuoso display piece. The pianists traded off lightly bristling phrases, akin to the solo parts of Mendelssohn’s piano concertos, with lively virtuosity, though not to any particularly memorable effect.

If one work on this program was genuinely fun, it was by the contemporary American composer Paul Schoenfield. Behind the bland, sober title of Trio for Clarinet, Violin, and Piano lies a klezmer riot. Jose Franch-Ballester is down with this Eastern European Jewish folk-influenced style, even though he’s from Spain. His clarinet wailed and made glissandos and fast runs up and down the scale, culminating with shrieks and whistles, keeping the rhythm loose and the atmosphere pungent. Poor Arnaud Sussmann was not starved for violin solos, yet it was easy to overlook him. His drier and cooler approach lacked the sizzle, not to mention the loudness, of the clarinet. The piano is the barroom accompanist in this outfit. Gloria Chien in this role contributed energy and impact as Barnatan did in the Chausson, without being as conspicuous about it.

The preceding (free!) Prelude concert, given by the festival’s International Program artists, eschewed the unusual repertoire of the main program in favor of well-known classics. This made it easy to calibrate the quality of the performances. These young professionals passed that test with fair brilliance. Two Mozart works for strings and piano (the Trio in E, K. 542, and the Quartet in G Minor, K. 478) were charmingly expressive. Both emphasized the melodic caress of Mozart’s music and gave a sure sense that every note was there for a reason.

The, perhaps surprising, highlight of this extra-long Prelude was Bartók’s String Quartet No. 2. The four young women who played this (Laura Keller and Jennifer Liu, violins; Eleanor Kendra James, viola; Ana Kim, cello) took listeners through a kaleidoscope of character moods, from French impressionistic through infusions of Hungarian folk to German academic, switching styles on a click while keeping the broad picture of the music integrated. They made a convincing case that this astringent modernist work belongs on the same program with Mozart. 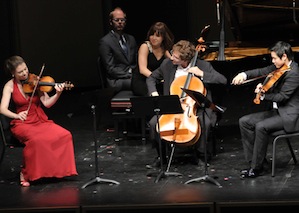 The day opened with a Young Performers Concert by the junior artists of the festival (also free). Anyone besides the performers’ parents who attends these does so to stare in astonishment at the already formidable skills of the 10-year-olds, while the 18-year-olds at the other end of the age range convince listeners that they’re ready to turn pro right now. That virtuosity, however, is usually achieved in standard repertoire. For this concert, the directors decided that, with 29 young pianists and string players to accommodate, they’d mix them up in unusual combinations, which resulted in unusual music offering a greater technical challenge. So we had works for two violins, for four cellos (mostly Baroque, these), piano four-hands, piano six-hands (this piece was by Alfred Schnittke; few others would attempt to write it), and string octet.

The two violins were the youngest group and the most stunning. Ten-year-old Clara Neubauer and 11-year-old Sean Takada whipped effortlessly through duos by Jean-Marie Leclair the elder and Charles-Auguste de Bériot. It had to be seen, as well as heard, to be believed. In much of the rest of the program, particularly the octets — one group gave the finale of Mendelssohn’s Octet, the other a movement from a double quartet by Louis Spohr — the young performers were less polished than they have been in other concerts. They played imperfectly enough to convince listeners that they’re merely human, yet still with impressive skill and enough character to give delight even in such quaint repertoire as Spohr’s distinctly Mozartean piece. They were pushed to the edge of their abilities, which is where great music-making ultimately comes from.