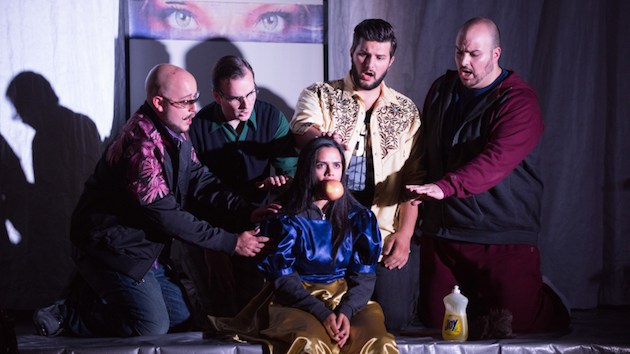 On his way into the San Francisco Conservatory of Music on Thursday night, an audience member arriving for a Merola Opera Program Summer Festival performance advised his companion to listen to the music and the singers and ignore the words. The language, he told her, “is pretty upsetting.”

To that account of Anne Sexton’s libretto for Transformations, the 1973 chamber opera with a score by Conrad Susa, he might have added various other descriptors — poetic, intense, psychological, playful, topical, darkly sexual, and decidedly profuse. Even though the score is sung in English, and was well articulated by the Merola cast in the first of two performances, attention is drawn inexorably to the projected supertitles. In an evening dominated to a fault by its language, Sexton’s almost incessantly vivid lines exert a vertiginous pull.

A listener feels duty bound not to miss a syllable, whether she is making pop-culture references (Muzak, Joe Dimaggio), conjuring a lethal image (a ravenous mother who wants to eat her child “like a blintz” and compares his smooth neck to a hard-boiled egg), or planting “secrets like a dog in heat.” In a piece that runs close to 2 ½ hours, including the intermission, the kind of workmanlike lines that both propel and pad almost any conventional opera libretto are few and far between here.

But this is an opera, after all, and the music and theatrical values matter. Loosely based on fairy tales by the Brothers Grimm, Transformations plays out in 10 episodes. Susa’s resourceful but ultimately subsidiary score employs a percussive, almost pointillist technique in much of the first half, which recounts a Sextonized “Snow White” and “Rumpelstiltskin” along with less-familiar stories such as “Iron Hans” and “The White Snake.” A more lyrical and broodingly expansive style prevails after intermission, where “Rapunzel” and “Hansel and Gretel” share stage time with “Godfather Death” and the incest-tinted “Briar Rose.” Marsha Ginsberg’s sets followed suit, trading in the bedsheet-style backdrop of the first act for a craggy, cavelike orifice in the second.

The production got off to a deceptively casual start, with the eight cast members ambling onstage over some bland organ palaver. Gradually, in their multiple protean roles, the singers began to make their marks over the sometimes jaunty, jazzy, waltzy, and bossa-nova-inflected ironies of the music. Neal Goren conducted with an attentive if sometimes fussy, overly cautious hand. 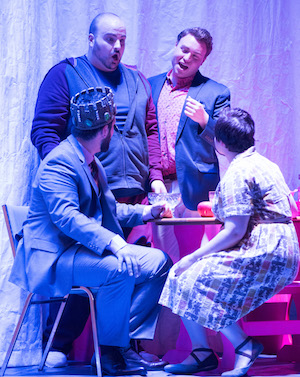 Shannon Jennings, who was singing under physical duress, nonetheless made a strong impression as the narrator (Sexton) and a witch with a tightly focused tone and creepily dominating aura. (She returned to the stage after intermission, mouthing her part while a more full-voiced Mary Evelyn Hanley took over and sang heroically from the pit.) Matthew Anchel was a sonorous king and hare. Boris Van Druff made a weaselly Rumpelstiltskin, his voice arched into a Truman Capote snivel. Teresa Castillo played a sympathetically traumatized princess and deceptively strong-willed Gretel.

The entire cast had a lot of verbal heavy lifting to do, working in story-theater style to both narrate and enact the tales. The result, which director Roy Rallo and the company did their best to overcome, was a certain static feel to the proceedings. The stage furnishings, which included a hutch, a settee, a bright pink restaurant booth, and a drum set, got minimal use. Rallo did enliven the space now and then by bringing the action through the fourth wall and into the house.

Transformations grew more engaging and, yes, upsetting after intermission. A lesbian-subtext “Rapunzel” unfurled over long, suggestively languorous vocal and instrumental lines, tinged now and then with gamelan-like shimmers, meandering clarinet melismas and a bongo backbeat. “Godfather Death” was a prolonged torch song. “Hansel and Gretel” used a vibraphone and moaning orchestral undertow to curdle its folk song character into something deeply sinister.

By evening’s end, the opera had transmuted its material into a kind of collective meditation on consciousness itself, the mystery and burden of living wide-eyed through a nightmare existence. Sexton, who committed suicide the year after Transformations premiered, is the show’s inescapable mistress of doom. Despite precious few laughs and little in the way of gamboling delight in these grimly altered tales, the acidic glimmer is something to behold. No matter how unnerving it may be, as Susa’s striving music and the hard-working Merola cast affirm, attention must be paid. 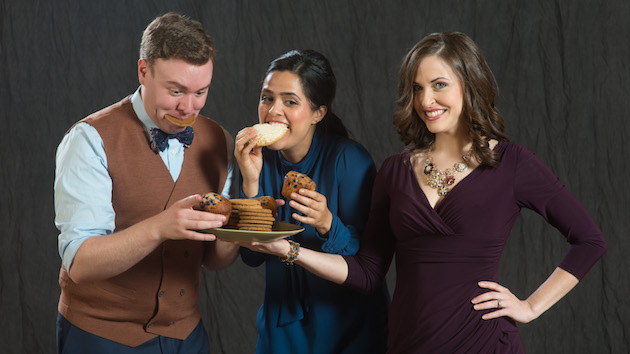