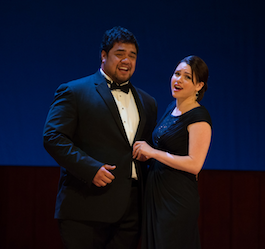 “We'll do the best we know … And make our garden grow.” And so did the entire assemblage demonstrate, while singing at the close of the Merola Grand Finale 2013, that they have grown tremendously in their few packed months in San Francisco Opera’s famed summer finishing school. Filling the stage of the War Memorial Opera House, one of the finest choruses anyone will ever hear performed the finale from Bernstein’s Candide. Arrayed in the center were the finale's six principals, each of whom sang as though stardom is already theirs.

Among them were New Zealand tenor Pene Pati (Candide) and Atlanta, Georgia, soprano Maria Valdes (Cunegonde). The stage “couple,” who also closed the first half of the concert with a superbly sung scene from Massenet’s Manon, has major career written all over them. The youthful, optimistic shine and clarity of Pati’s lyric tenor, as well as its innate drama and passion, are in many ways reminiscent of the young Jussi Björling — tenors with uncommon beauty of tone throughout the range and a palpable love of singing. Both here and in the Schwabacher Summer Concert, Pati was an absolute joy.

Valdes was right up there with him. Although she had no difficulty producing the volume necessary to fill the house, her voice, when taken down a notch, as it was when she sang Susannah in The Marriage of Figaro in Everett Auditorium, is uncommonly beautiful as well as steady and sure. The gift of grace and passion are also hers. If she can project more vulnerability and warmth while singing full out, she will go very, very far. 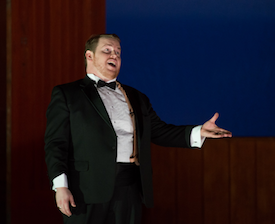 Pati, who is all of 25 — the same age that Frederica von Stade was when signed to the Met — was but one of the many major tenor promises who shone in the Grand Finale. Even larger in both voice and body, dramatic tenor Issachah Savage proved a tremendous, heroic Lohengrin. The line of his gorgeous voice in “Mein lieber Schwann” was seamless, the energy unflagging.

Having previously thrilled the loyal Merola audience with his Otello in the Schwabacher Summer Concert, Savage, who also has a delightful comic sensibility, can easily be imagined following in the footsteps of Domingo and Botha.

Another tenor promise fulfilled was Kansas City’s Robert Watson. Following his sensational, deeply moving Male Chorus in Britten’s The Rape of Lucretia, Watson’s searing “Claggart, John Claggart, beware!” in Britten’s Billy Budd seemed designed to proclaim to the world that another great Britten tenor, a pupil of our own César Ulloa, has arrived. If Glyndebourne was listening, expect the U.K. to take notice shortly. 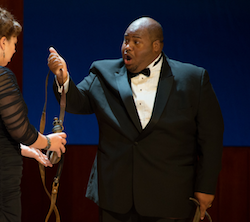 The strong, handsome and arresting voice of Austin tenor Casey Finnigan shone as Max in “Nein, länger trag’ ich nicht die Qualen … Durch die Wälder, durch die Auen” from Weber’s Der Freischütz. Although his instrument lacked point at the top of the range, his performance of this extremely beautiful music was so convincing — the melody continues to resound through my head — that the audience demanded a second bow. At these men’s sides, metaphorically if not literally, will likely be several other Merolini. Another American from Georgia, baritone Joseph Lattanzi, slew the audience with the power and passion of his Ulisse.

Singing “Dormo ancora?” from Il ritorno d’Ulisse with the same breath-stilling energy that he brought to the Count in Le nozze di Figaro, Lattanzi proved that he has the strength to project from the very back of the stage. Monteverdi may not have been on many audience members’ Top 40 Hit List until last night, but you can be sure that some spent their Sunday dusting out their old recordings or searching YouTube for performances that could equal Lattanzi’s. Fabulous in every way. 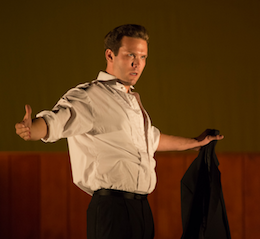 I don’t know how to pronounce beautiful Latvia mezzo-soprano Zanda Švēde’s name, but the plush, smooth tone she brought to “Où suis-je? ... O ma lyre immortelle” from Gounod’s Sapho proclaimed that we all will most likely know how to say her name in the years ahead. I can think of no finer compliment than to note the strength and beauty she brought to the aria, which brought to mind another Merola grad, Susan Graham.

On the basis of two hearings, Marcellina in Figaro and Ortrud in last night’s “Ortrud! Wo bist du?” from Lohengrin, I have become a major fan of Philadelphia native, mezzo-soprano Daryl Freedman. Her strong, slightly harsh, distinctive voice, and somewhat imperious presence were tailormade for both roles, as different as they may be in character. At her side, soprano Aviva Fortunata was equally strong as Elsa, although the harshness in her voice was not ideal for the naively faithful but curiously doubting Elsa.

Another Ulloa pupil, Dublin (Ireland) mezzo Kate Allen, followed her strong Lucretia with three appearances in the Finale. Most notable was her gorgeous, strikingly mature-sounding Hélène in “C’est le ciel qui m’envoie” from Offenbach’s La belle Hélène. At her side, Illinois native tenor Matthew Newlin acted hilariously and sang beautifully, albeit with too light a voice to be heard over Allen’s major presence.

I have twice been struck by the promise of two men: Santa Ana native and baritone Efraín Solís, who sang wonderfully as Junius in Rape, and our Georgia native, bass-baritone John Arnold, who tore up the set as Figaro in Mozart’s masterpiece.

Both again sang wonderfully as Dandini and Magnifico in “Ma dunque io sono un ex? ... Un segreto d’importanza” from Rossini’s La Cenerentola. But stage director George Cederquist’s decision to posit tall, thin Arnold as Solís’ would-be seducer was both wrong for the plot and, to my sensibilities, more than a bit cloying. (In all fairness, my guest for the evening, a former President of the San Francisco Pride Celebration, joined the majority of the audience in loving it.)

After a very fine Female Chorus in Rape, Tennessee soprano Linda Barnett displayed so many thrilling, dramatic colors as Vanessa in “Do not utter a word” from Barber and Menotti’s gothic opera that I only wished she could have brought even more emphasis to certain words and held the final, beautifully voiced note longer.

At her side as Erika, Montreal mezzo Rihab Chaieb sang beautifully, with only one harsh high note, and touched the heart with her emotive “Must the winter come so soon?” 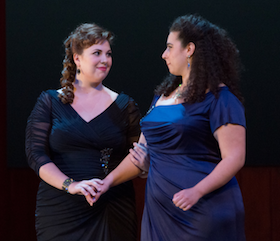 In other performances, New York mezzo Katie Hannigan seemed determined to pour out the volume in “When I am laid in earth” from Purcell’s Dido and Aeneas, and consequently failed to touch the heart. Illinois soprano Jacqueline Piccolino sounded tentative at the start of “O mio babbino caro” — very different from her assured Countess in Figaro — and displayed insufficient mastery of the forward momentum and arch of the Puccini line. We all have off nights.

Iowan bass-baritone Rhys Lloyd Talbot sounded somewhat muffled in an aria from Handel’s Ariodante, his low notes too soft and a few high notes lunged at. Wisconsin high soprano Alisa Jordheim, so absolutely lovely in her two prior Merola appearances, sounded over-determined in “Dal tuo gentil sembiante” from young Mozart’s Ascanio in Alba, screaming some of her top notes and faking her trill. Iowa baritone Chris Carr displayed distinctive darkness at the bottom of his voice and handsome tone, but didn’t quite wrap himself around nor soar with the longing of “Mein Sehnen, mein Wähnen” from Korngold’s Die tote Stadt. 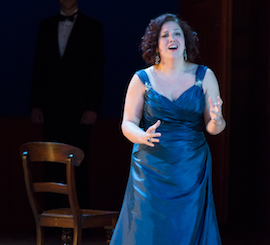 North Carolina bass-baritone David Weigel’s has a strong instrument with a fine low end, but he seemed too careful and studied in “O tu, Palermo” from Verdi’s I vespri siciliani. to become one with the role.

If I’ve said little about the excellent San Francisco Opera Orchestra and the conductor John DeMain, it’s because my 6th row seat was a bit too close to hear the bloom that results in a fair evaluation. While, from my perspective, energy in the opening overture from Wagner’s Die fliegende Holländer sagged at times, with the ending insufficiently rousing, DeMain was 100% with his singers, allowing for every change of tempo and volume.

Fingers are crossed that many of these fine singers remain with us as Adler Fellows. Although they may begin with small roles on the major stage, the vocal beauty and artistry they are destined to bring to countless other Adler Fellow performances guarantee that those who follow their careers will soon be able to say, as they now do of Leah Crocetto, Elza van den Heever, and countless other Merolini, “I heard them at the start of their careers, and they were fabulous.”