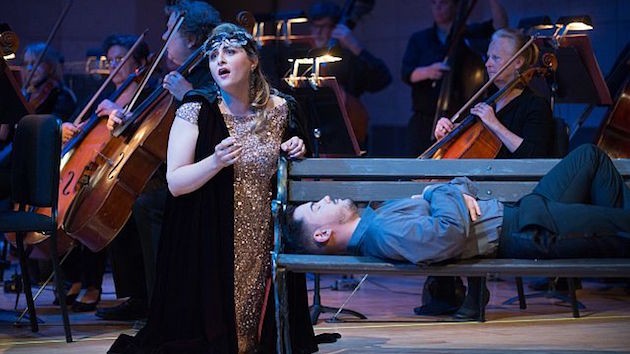 Opera and big often go together, but the event in the S.F. Conservatory of Music Concert Hall Thursday evening was still unusual because of its timing. 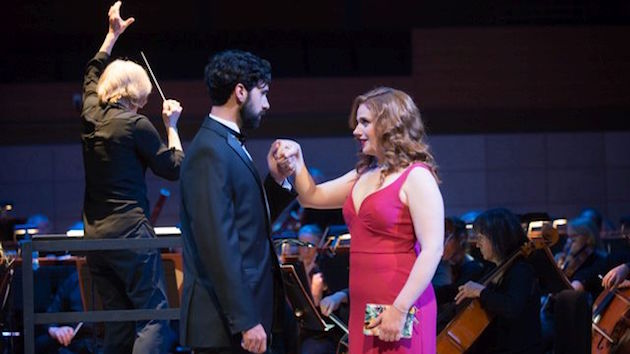 It began as Manson had the full orchestra, squeezed onto the small stage, explode into “La tragenda” from Puccini’s rarely-performed Le Villi. Continuing with imaginative programming, the first selection presented two scenes from Douglas Moore’s The Ballad of Baby Doe, one of the finest and most neglected American operas. (If you except Colorado any time or San Francisco, in 2000) 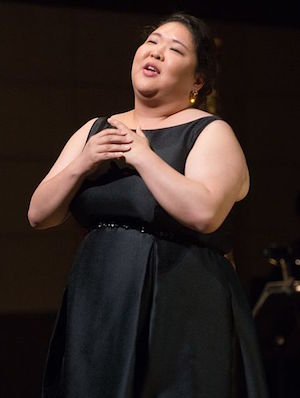 With six Merolini providing the chorus of townspeople, three of their peers enacted the drama between Horace Tabor, “The Bonanza King of Leadville” (Dimitri Katotakis), his long-suffering wife Augusta (Alice Chung), and Baby Doe herself (Kendra Berentsen).

Katotakis, an impressive baritone from Toronto, managed well, while Berentsen, a soprano from Portland, Oregon,  sang effortlessly in the stratosphere, and Chung, a mezzo from Loma Linda, California, delivered a stunning performance.

Both in this role and later as Santuzza in a Cavalleria rusticana duet with Chinese tenor Xingwa Hao’s splendid Turiddu, Chung appeared as a force of nature — with a sound both powerful and appealing. Equally a dramatic and lyric soprano, Chung seems to have an unlimited future for her natural gifts, focus, and determination. One immediate task, probably a natural for the Merola treatment: improve diction even further.

Alexandra Razskazoff, busy throughout the evening, had her star turn in the title role of Donizetti’s Lucrezia Borgia, and the soprano from Minnesota gave a vocally and dramatically impressive performance in an aria and duet with Gennaro, sung by tenor Andres Acosta (Miami, Florida). Hao had a minor role here, but he returned prominently as Max in von Weber’s Der Freischütz, with Princeton, New Jersey, soprano Felicia Moore as Agatha. 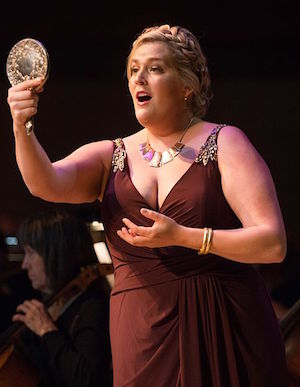 Somebody had fun with Massenet’s silly “religious-erotic drama” Thaïs, costuming Minnesota baritone Thomas Glass with crosses on both his lapels to go with the one he was carrying. Glass overcame potential giggles and stood his ground against Mathilda Edge’s narcissistic courtesan. The soprano from Illinois portrayed Thaïs in a performance ready for the whole opera (which made even the divine Beverly Sills fold in one of her final San Francisco appearances, in 1977).

At another time, in another place, the “Ice Cream” scene from Kurt Weill’s Street Scene would be welcome — with all participating Merolini — but coming as a closer after the properly and mightily over-the-top verismo of Cavalleria, it didn’t seem right. It was too much of a mood-changer that came too quickly on the heels of the previous performance.

Kudos to David Lefkowich for minimal, basic stage direction of an event dedicated to the presentation of voices. Lefkowich’s innovation of brief introductions by Merolini to some of the selections was fine, but one aspect of the speedy, straightforward direction was debatable: No curtain calls until the end meant less intense acknowledgment of star turns and climactic moments transformed into the beginning of something else. Yes, it was expeditious, but ...

Corrections: The review as originally published misspelled the names of Xingwa Hao and Alexandra Razskazoff. We regret the error.