Jumping the gun a bit, ChamberBridge presented three programs of music by Olivier Messiaen, his associates, and major family members Saturday in Old First Church. The programs were set up to honor Messiaen's centennial — which actually occurs on the 10th of next month. The survey was most unusual, as festivals go, since relatively little of the composer's actual works appeared amid the programs, set forward under the rubric of "Messiaen Illuminated." 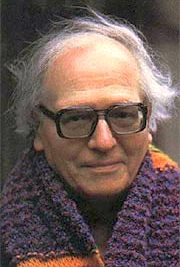 The first half of the three o'clock matinee opened with Feuillets Inédits No. 3, based on Messiaen's birdcall sketch books as arranged by his second wife, pianist Yvonne Loriod. That is scored for a duo of the electronic ondes Martenot and piano. This was followed by André Jolivet's Incantation (1937) for solo ondes Martenot, and by Messiaen's Vocalise (1935), which he himself arranged for oboe and piano from his vocal original. Then came something familiar: Debussy's three Chansons de Bilitis (1898), before Messiaen's Trois Mélodies (1929). Those formed the half of it.

Messiaen led a very active life (1908-1992) as organist, theorist, poet, prisoner of war, teacher, ornithologist, and worker in the religious music of several ancient cultures. Born in Avignon, he studied organ in Paris with Marcel Dupré and composition with Paul Dukas, before being appointed organist at l'Eglise de la Sainte Trinité in 1931. In 1936, he cofounded "La Jeune France" with Jolivet, Daniel-Lesur, and Yves Baudrier, and later served in World War II (during which he was captured and imprisoned).

During all this, he founded an entirely new concept of how music could be put together and used for acceptable, religiously oriented pieces that were easily accessible to the general public. Few of the avant-garde can claim as much accomplishment from their own time — certainly not Messiaen's two most famous pupils, Pierre Boulez and Karlheinz Stockausen (neither of whom, by the way, was presented on these programs).
Songs Out of Tragedy
The least-known composer represented in ChamberBridge's first concert Saturday was violinist Claire Delbos (1906-1959), Messiaen's first wife. They were devoted to each other, which accounted for Messiaen's early, mystic love songs, the Mélodies, on two poems of his own, with one by his mother, the poet Cécile Sauvage, and the rather erotic Poèmes pour Mi. ("Mi" was Messiaen's nickname for his first wife, who died slowly, tragically, as her brain turned to mush.) Delbos' five songs, all derived from poems by Messiaen's mother, sounded as if they were much within the sonic sphere of Messiaen's influence. (Or was it the other way around?)

A larger surprise for me was Messiaen's Fantaisie, written for his violinist wife. But it went unpublished until 2007. Why? Well, it was said by some to be too conservative, which it isn't. No, there was a simpler problem. The opening fanfare-chant was lifted to open the second movement of Messiaen's L'Ascension (1933), for organ. So he held back the Fantaisie all his life. That has happened to other composers, notably Samuel Barber, who "withdrew" his Second Symphony after raiding it to meet the deadline of his opera Anthony and Cleopatra in time to open the new Metropolitan Opera House.

Jolivet made a fine colleague for Messiaen, for he, too, was concerned with the music of exotic cultures and religious mysticism. Only his titles seldom give that away, unlike Messiaen's. By contrast, Jolivet was also capable of writing humorous, witty music, and even quite decent jazz, which as far as I know the guru-like Messiaen was not.

Jolivet’s use of the ondes Martenot was particularly subtle, avoiding its repulsive tendency to shriek. That was also aided by Chun’s elegant musicianship each time she performed on it. The mild hint of menace in her playing was rather intriguing. Another special bravo was due the cleanly articulated virtuosity of Swiss pianist Zimmermann. I keep hoping that someone around here will program Jolivet’s power-packed Piano Concerto, which is a stunning virtuoso work.

Soprano Bruckmann sang with richly lyrical charm when she kept within her Mozartean limits. But here and there she would force her voice into dramatic dynamics. When that occurred, her sound would splinter into a vibrato wobble of coarse timbres. She's basically a musical singer, but an Isolde she'll never be.

This was an extremely informative program and a fine tribute to the music of the 1930s, as well as to the genius of Olivier Messiaen. The curious thing, though, was that it included none of his important piano works, or even his massive amount of organ music. The latter constitutes the major organ music of the 20th century, with no close second. And Old First is, after all, a church with organ performance possibilities.